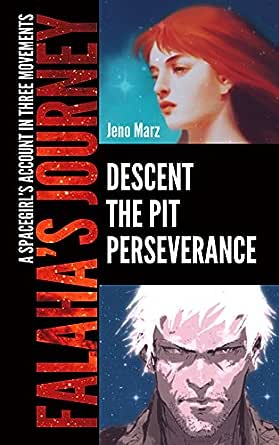 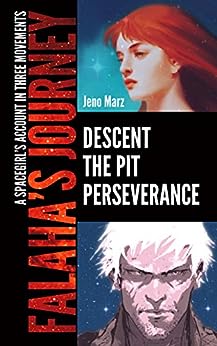 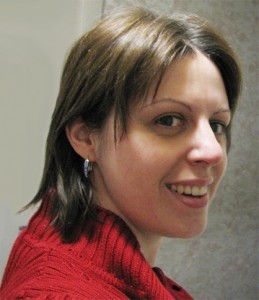 JENO MARZ is a science fiction writer from Latvia, Northern Europe, with background in electronics engineering and computer science. She is the author of two serial novels, Falaha's Journey: A Spacegirl's Account in Three Movements and Falaha's Journey Into Pleasure. Marz is current at work on a new SF novel. All her fiction is aimed at an adult audience. --This text refers to the paperback edition.

3.0 out of 5 stars
3 out of 5
3 global ratings
How are ratings calculated?
To calculate the overall star rating and percentage breakdown by star, we don’t use a simple average. Instead, our system considers things like how recent a review is and if the reviewer bought the item on Amazon. It also analyses reviews to verify trustworthiness.

G G S COLLINS
2.0 out of 5 stars It's not for me!
Reviewed in the United Kingdom on 23 June 2015
Verified Purchase
I have to admit that I didn't make it to the end of the book - I gave up half way through the final section - and so I cannot pretend that this is necessarily a fair review. The book itself is now residing in a Charity Shop!

Before I try to summarize the story line, here are the items that I found annoying, or worse. First, the social set-up that Falaha belonged to together with the other beings of human origin was complex, with a number of contrived and gibberish terms to describe them, making it difficult to follow what was happening. There was a totally inadequate glossary at the end with many of the names and terms I wished to check on omitted. Second, there were two different types of artifacts carried in the blood of certain of the characters that gave them enhanced powers; the powers were more related to fantasy stories rather than SF - more like Gandalf stretching out his hands to blast someone to eternity with internally generated power than the kind of abilities an advanced human might have. Third, the story was enthused with "romance" between Falaha and of the male characters - in itself no bad thing but I recall that Falhala as 6 years old and the romance consisted of the characters leaning on each others shoulders and repeatedly blushing when there feelings were referred to: this happened on many occasions throughout the book. Because of the ages of the characters involved, there was no sex!! Fourth, the story developed at a snail's pace, with large chunks involving descriptions of the social setups; Action Man would have done away with himself after the first few chapters - as I almost did. Fifth, I found it difficult to cope with Jeno Marz's style of writing. In particular, she had the habit of asking questions throughout the text, so that after an occurrence was recorded, there followed a list of sometimes many question (on one page, I counted 13 such questions}. I suppose that the intention was to prod the reader into considering the possible significance/cause/outcome of events. I expect that eventually, the questions were answered but by the time they were, the questions had long been forgotten.

Falaha's Journey is a series of 3 novels, loosely described as space opera. She belongs to a species of humanoid aliens, the Danna, but I am unclear whether they originally evolved from humans. The Danna are in the process of abandoning their home galaxy and making their way to a last refuge, Kan Diona. The story starts with a simple rescue mission launched from a vast spaceship but inspite of warning, the missions turns turns into a complex nightmare. The Danna, with their newly rescued companions, then attempt to save their people. Finally, a gruesome discovery draws the attention of a powerful enemy. Will they achieve their aim?

Perhaps I am simply being unreasonable as the premise of the trilogy seems sound. Perhaps you ought to try the epic yourself?
Read more
Report abuse

Veronica Sicoe
4.0 out of 5 stars Highly original world with unforgettable aliens
Reviewed in the United States on 20 January 2016
Verified Purchase
This is definitely something else. A science-fiction adventure with an all-alien cast that takes us through an universe both familiar and utterly new.

I think the greatest thing about this story is the worldbuilding. Spectacular, imaginative technology, formidable alien foes that really make the hairs on the back of your neck stand up, and an intricate backdrop where cultural history mixes with the personal lives of the characters. You get it all - and more!

What I found difficult, sometimes, was to form an emotional engagement with the characters, in part because of their alien nature, in part because the story relentlessly tugs you deeper and deeper into its core, not allowing for much respite. And the worldbuilding truly is this story's strong point!

Although Falaha and her companions are memorable, what I found stuck to me even long after I read the story, were her enemies. Fantastic creatures! I strongly suggest you meet them...
Read more
One person found this helpful
Report abuse

CARLA PEÑALOZA
3.0 out of 5 stars Three Stars
Reviewed in the United States on 30 November 2015
Verified Purchase
It Was a little unespected the reverse harem and unerving
Read more
Report abuse
See all reviews
Get FREE delivery with Amazon Prime
Prime members enjoy FREE Delivery and exclusive access to movies, TV shows, music, Kindle e-books, Twitch Prime, and more.
> Get Started
Back to top
Get to Know Us
Make Money with Us
Let Us Help You
And don't forget:
© 1996-2020, Amazon.com, Inc. or its affiliates