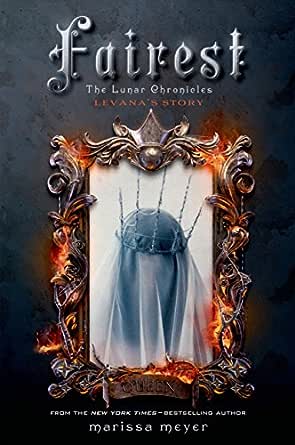 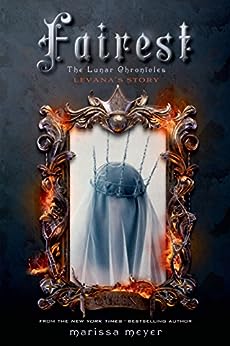 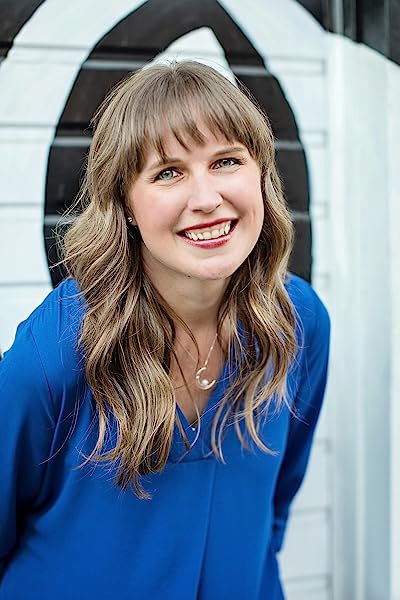 'In this prequel, Meyer explains how [Queen Levana] went from lonely, shy second daughter to the most feared and relentless woman in the universe ... Thorough world-building and fascinating character development will thrill fans and entice new ones.' Author: School Library Journal

Fans of The Lunar Chronicles will not want to miss this never-before-told short story of the evil Queen Levana ...
See all Product description

C M Ashton
4.0 out of 5 stars The Lunar Chronicles is a great SciFi/fantasy series with a very original concept.
7 November 2018
Format: Kindle EditionVerified Purchase
We were introduced to this series by our fourteen-year-old granddaughter, and my husband and I thoroughly enjoyed the whole series. I think that's a pretty good recommendation.
Read more
Helpful
Comment Report abuse

Kate Crawford
5.0 out of 5 stars Give us more
15 April 2016
Format: Kindle EditionVerified Purchase
I'm gutted that this was all there is. The stories are all left so open! Please pleease don't leave us hanging!
Read more
Helpful
Comment Report abuse

Casey Carlisle
TOP 500 REVIEWER
4.0 out of 5 stars It's the WICKED of the Cinder Universe...
14 September 2018
Format: Paperback
The origin story of Queen Levana – you may end up feeling a little compassionate for her… but not for long.

“I’m not bad, I’m just drawn that way” a quote from Who Framed Roger Rabbit springs to mind when I think of Queen Levana, knowing that nobody starts out bad, they usually are shaped through events. In other cases, some are born with a little evil and embrace the darkness within until consumes them. You’ll have to make up your own mind which category Levana falls into.

Marissa managed to write a great story with the same magical tone of Cinder. New surprises are uncovered, the world/moon is explored a little more, everything moving to enrich the Lunar Chronicles Universe. Ultimately building an antagonist more terrifying than any Disney baddie.

The prose is easy to read and fierce on pace, it’s definitely a book you can blaze through in one sitting. It doesn’t double dip either. I could see how some topics could have been a big trap, like the virus, or the genetic hybrids – but seeing how they were major plot points in other novels, they were merely mentioned in passing… which is fantastic because my interest would had wavered if suffering repeat information.

There is not much else to say – it was a fun read, and definitely fueled my intense dislike for the Lunar Queen – in a good way. So I highly recommend you add this title to your collection if you are a Cinder fan!

Tassi
TOP 1000 REVIEWER
5.0 out of 5 stars Eyeopening Story For Queen Levana!
31 October 2018
Format: Kindle Edition
WOW....what a read!!! Okay where to start...well when I first started reading this...I was like I don't really want to know how the villain queen in the Lunar Chronicles came to be like she did...but this book proved me to be wrong!!!

Now usually these prequel books make u understand and love the character more and make some sort of connection with them..well in this case...nope...the author Marissa kept us in the mode of total dislike. She had a way with her words that made u understand where Levana came from but at the same time did she in no way excuse the terrible things she did to make herself a "better" Queen!

Even though I really enjoyed reading this...I found myself missing the other characters in the Lunar series, that we have come to love...

I am now super sad that I didn't get another fill of them, before having to wait like another 6 months for the release of the next book. :(

E. A. Solinas
TOP 10 REVIEWER
4.0 out of 5 stars Who is the fairest of them all?
16 February 2016
Format: Kindle Edition
By the time of the Lunar Chronicles series, Queen Levana is a monster -- a icy, cruel creature who brutally murdered her own niece and seeks to conquer the Earth.

But in "Fairest: The Lunar Chronicles: Levana's Story," Marissa Meyer travels back in time to explore how a lonely young princess became the monstrous glamour-wrapped queen of Luna. It's a dark, bleak story that deftly avoids the problems that usually come from "how a villain became a villain" stories, instead giving us a compelling story about how a woman's slow descent into darkness -- and how the road to hell is paved with a princess' good intentions.

After the brutal murder of her parents, Princess Levana Blackburn finds herself an outcast in the Lunar Court. Her cruel, debauched sister Channery is now the new queen, and she never passes up an opportunity to torment her little sister. The only person who shows Levana kindness is the guard Evret Hayle; Levana believes herself to be madly in love with him, craving a lover and family, but is riddled with misery and jealousy when she finds that he has a pregnant wife.

When his wife dies in childbirth, Levana uses glamour and mind control to slowly sway Evret into a relationship -- and though he resists her at first, eventually they are married. But her married life does not bring her the happiness she craves, as they are still haunted by the specter of his first wife. When her sister dies unexpectedly, Levana finds herself in control of Luna... but only until Channery's baby daughter Selene comes of age, in another twelve years. To be a true queen, Levana will do something truly terrible...

Writing a villain's backstory is a tricky business. They need to be expanded as a character so readers can understand what makes them tick... but that very act can demystify them, or make them too "likable." See "Maleficent" for a prime example. So it's a testament to Marissa Meyer's skill that she does this so well in "Fairest," making Levana more fleshed-out, sympathetic character without diminishing the monstrous things she has done over the years, climaxing in murders that she feels no guilt over.

It's a story as cold and bleak as the pale surface of the moon, and Meyer's strength is that she spins up a story that is essentially a slow descent into true evil. In a way, this is the antithesis of most young-adult fantasy and sci-fi -- the "love" story is empty and meaningless, the heroine's ascent to power is riddled with horrifying actions like bio-warfare and genetic abominations, and it's painfully obvious that this fairy tale will not have a happy ending. Many scenes that have the sheen of a happiness are painfully (and deliberately) hollow, like the wedding ceremony.

It also helps that Meyer's writing is stunningly beautiful and atmospheric, painting a court as exquisitely beautiful and empty as the glamours the courtiers employ. The biggest weakness is that occasionally something important (like Channery's illness and death) are skimmed over in passing, when they could have been explored in more detail. I know this is a novella spanning a decade, but it's a bit disconcerting at times.

Levana herself is the masterful stroke in this story -- at first she seems like another mildly-damaged young-adult heroine who wants true love and freedom from a mean relative. As it begins, you pity her. But as the story unwinds, Meyer reveals that her romantic streak is a desperate, almost sociopathic craving for love and acceptance, a black hole that grows as it consumes. What made her pitiable and identifiable is warped and twisted, and her desperation slowly calcifies into full-blown cruelty. And as she's comparable to the wicked queen of "Snow White," Meyer cleverly weaves in mirror imagery and a reason for the queen to want so much to be "fairest of them all."

"Fairest" gives a clever twist to the tale of Snow White -- a story of the wicked queen, and the terrible events that turned her into a murderous monster. It could use a bit more fleshing out, but the elegant writing and the masterful exploration of the villain make it a must-read for fans of the Lunar Chronicles.
Read more
Helpful
Comment Report abuse
See all 5 customer reviews
Write a customer review

Go to Amazon.com to see all 789 reviews 4.3 out of 5 stars
Get FREE delivery with Amazon Prime
Prime members enjoy FREE Delivery and exclusive access to movies, TV shows, music, Kindle e-books, Twitch Prime, and more.
> Get Started
Back to top
Get to Know Us
Make Money with Us
Let Us Help You
And don't forget:
© 1996-2020, Amazon.com, Inc. or its affiliates