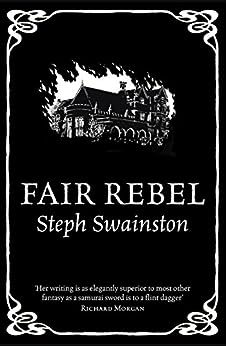 by Steph Swainston (Author) Format: Kindle Edition
See all formats and editions
Sorry, there was a problem loading this page. Try again.

In the fifth book in the Castle series, Steph Swainston returns to her uniquely imagined fantasy world.

Fifteen years after the last devastating Insect attack, the immortal Circle is finally ready to launch an offensive against their implacable enemies. This time they have a new weapon - gunpowder. Hopes are high.

But the Circle's plans are threatened when the vital barrels of gunpowder go missing. Jant, the Circle's winged messenger, is tasked to investigate. Soon it becomes clear that the theft is part of a deadly conspiracy . . . and Jant and his friends are among the targets.

As tensions rise, Jant races to foil the conspirators. Can he expose them in time - or will the crisis blow the Fourlands apart?

A hugely entertaining, smart and passionately rendered novel. (SCIFINOW) --This text refers to the paperback edition.

Honest-to-god unputdownable. A blistering debutSteph Swainston's writing is as elegantly superior to most other fantasy as a samurai sword is to a flint daggerA stunning fantasy, and the most incredible thing about it is that it is a first novel... The setting is impeccably realised, with a deftness of touch and a genius for description which would be impressive in an author of considerably greater experience - of the current crop of British fantasy writers, only China Mieville can touch this level of brilliance. In fifty years time, people are still going to be reading this book and talking about it the way we talk about Gormengast - INK MAGAZINEHer descriptive passages are rich and vivid and her characterisation is actually even better; frankly it's superb... Even her dialogue is free-flowing, original, yet natural-sounding; how often do you get that from a debut novelist? As for the protagonist himself: in Jant Shira, Swainston has come up with one of the most irrepressibly loveable rogues in fantasy fiction, bar none. So, The Year of War has everything, yes? It's about as close to a perfect debut as you can get - THE ALIEN ONLINEA joy to read, it is bursting at the seams with ideas. The Year of Our War is the first book that makes you believe New Weird actually is a movement, rather than a bunch of books China Mieville likes. A Mieville quote appears prominently on the cover where he describes the book as "thoughtful, exuberant, incredibly inventive, funny but never whimsical or mannered." This is true and it doubles as a kind of manifesto pledge for New Weird - SF SITEAn enjoyable piece of 'weird' fiction - DREAMWATCH --This text refers to the paperback edition.

Steph Swainston is a qualified archaeologist with a degree from Cambridge and a research degree. She worked as archaeologist for six years, working on the dig that researched the oldest recorded burial site in the UK, before working as an information scientist. Her Castle novels have been highly praised by authors and critics alike. She lives in Wokingham. --This text refers to the paperback edition.

Steph Swainston is a qualified archaeologist with a degree from Cambridge and a research degree. She worked as archaeologist for six years, working on the dig that researched the oldest recorded burial site in the UK, before working as an information scientist. Her Castle novels have been highly praised by authors and critics alike. She lives in Wokingham. --This text refers to an out of print or unavailable edition of this title.

Steph Swainston returns to her uniquely imagined fantasy world of the Fourlands. --This text refers to an out of print or unavailable edition of this title.
Read more

S. Bentley
5.0 out of 5 stars Rebel rebel
Reviewed in the United Kingdom on 26 December 2016
Verified Purchase
The Fourland novels was a series that I awaited eagerly in the 2000s. I'm not really a fan of high fantasy, but Swainston's work was classified as New Weird, an intriguing mixture of modern sensibilities alongside medieval society building that spoke about our world in a compelling, irreverent, untrustworthy voice in the form of recovering (and sometimes not recovering) addict and immortal Jant, who works for the Emperor of the Fourlands as part of the Circle who lead the war against the Insects that threaten to destroy the realm. And then Swainston stepped away from writing and it seemed like it was all over.

Earlier this year I stumbled onto the news that there was a new novel coming out. To say I was excited, well they'd certainly be accurate. Fair Rebel picks up pretty much from where the series had left off. Saker, former Lightning of the Circle, has given up his immortality and his daughter Cyan is now the archer, though she is plagued by challenges. Saker's lover, Swallow, has killed herself because the Emperor only gives immortality to warriors, not to artists. And then the terrorist attacks begin. The introduction of rifles and gunpowder to the Fourlands from the other-dimensional shift has been turned to bombs and strikes at the Circle, trying to bring it down. The Circle is put on the back foot facing two sets of threats.

The novel brings a new status quo to the novels. I had, back in the day, been concerned that Swainston had drained the metaphor of immortality in the Fourlands, but the story here uses the changes in our world to create a situation that comments quite strongly on inequality and the manner in which the old power structures do not understand the common man. The events of the last year make this incredibly timely.

There is less humour in this novel, the stakes are too high and events push so hard that there is little space for it. The novel is beautifully written for the heaviness of the subject matter. It focusses primarily on the relationship between Jant and Saker, which is always compelling and given extra frisson in that Saker is now aging and mortal, becoming the father figure to Jant that we see in our parents as they age. Perhaps the antagonist Connell never gains our sympathies as well as she might, but she is fighting the force of four previous novels and people we have grown to know and love, despite their faults.

That we know there is another novel already in the pipeline is an excellent gift.
Read more
2 people found this helpful
Report abuse

Kindle Customer
4.0 out of 5 stars Fair rebel
Reviewed in the United Kingdom on 5 June 2017
Verified Purchase
I really enjoyed this book, revisiting all of the characters and watching them struggle through the greatest challenges yet...however I hoped for more about the emperor to be revealed, as many hints were dropped in the modern world about his origins. In addition, my favourite parts of all the other books involved the shift interacting with the fourlands, and that seemed lacking here. However, the introduction of gunpowder and the successes against the insects at last were beautiful, and the end set up a sequel that I hope arrives soon
Read more
Report abuse

mathew
5.0 out of 5 stars Love steph swainston.
Reviewed in India on 16 August 2019
Verified Purchase
Loved the book.
Waiting for the next installment.
Read more
Report abuse

Steve B
5.0 out of 5 stars WOW!!!!!! Just bloody WOW!!!!
Reviewed in the United Kingdom on 7 December 2016
Verified Purchase
Wow!!!! Steph Swainston is back. Anyone who has read the previous books will instantly be returned to the Fourlands and to a completely different take on the Circle and the Castle but with a happy dose of the familiar. Betrayal, terrorism, unrequited love and those damned Insects make Jant's and Saker's lives a complete mess, although that's no change for Jant... Brilliant to have another glimpse into the world Miss Swainston has created and a great direction to take the overall arc of the story. I'm not a believer in those who post a complete synopsis for you to read, meaning you don't have to buy the book, but trust me, these novels by Miss Swainston are a breath of fresh air in what is sometimes a very formulaic genre. More please Steph, and please please don't wait so long till the next story needs telling.
Read more
3 people found this helpful
Report abuse
See all reviews
Back to top
Get to Know Us
Make Money with Us
Let Us Help You
And don't forget:
© 1996-2021, Amazon.com, Inc. or its affiliates