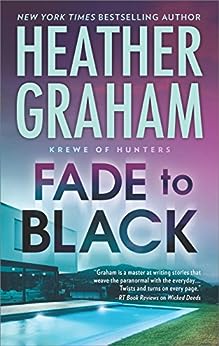 Graham stands at the top of the romantic suspense category. -Publishers Weekly Graham is a master at world building and her latest is a thrilling, dark, and deadly tale of romantic suspense. -Booklist, starred review, on Haunted Destiny Intricate, fast-paced, and intense, this riveting thriller blends romance and suspense in perfect combination and keeps readers guessing and the tension taut until the very end. -Library Journal on Flawless Graham is the queen of romantic suspense, and her latest is proof that she deserves the title. What makes this story more fun than most is the relationship between Kieran Finnegan, who wants nothing more than family harmony and a functioning restaurant, and FBI agent Craig Fraiser, who wants justice. Sparks fly, and it's electric. -RT Book Reviews on Flawless Graham is a master at writing stories that weave the paranormal with the everyday.... This book was a great read with twists and turns on every page that is classic Graham style. -RT Book Reviews on WICKED DEEDS Compelling and suspenseful...keeps readers guessing until the end. ...Graham is a master at crafting stories that never feel old. -- RT Book Reviews on Dying Breath Graham wields a deftly sexy and convincing pen.-Publishers Weekly --This text refers to an alternate kindle_edition edition.

New York Times and USA Today bestselling author Heather Graham has written more than a hundred novels. She's a winner of the RWA's Lifetime Achievement Award, and the Thriller Writers' Silver Bullet. She is an active member of International Thriller Writers and Mystery Writers of America. For more information, check out her websites: TheOriginalHeatherGraham.com, eHeatherGraham.com, and HeatherGraham.tv. You can also find Heather on Facebook. --This text refers to an alternate kindle_edition edition.

4.7 out of 5 stars
4.7 out of 5
339 global ratings
How are ratings calculated?
To calculate the overall star rating and percentage breakdown by star, we don’t use a simple average. Instead, our system considers things like how recent a review is and if the reviewer bought the item on Amazon. It also analyses reviews to verify trustworthiness.

Luba
4.0 out of 5 stars To Believe
Reviewed in Canada on 22 June 2018
Verified Purchase
Heather Graham's books are a great favorite in my house. I do admit that the Krewe of Hunters series holds a special place in my heart. Always look forward to her next book.
Read more
Report abuse

Edith Kervin
5.0 out of 5 stars One more krewe
Reviewed in Canada on 9 March 2021
Verified Purchase
Another great read fm Heather and the Krewe. I love this series. Of course all of Heather Graham 's books are great.
Read more
Report abuse

Amazon Customer
5.0 out of 5 stars Five Stars
Reviewed in Canada on 23 June 2018
Verified Purchase
Excellent writer she keeps you on your toes to keep reading
Read more
Report abuse

Kindle Customer
5.0 out of 5 stars Fade to Black (Krewe of Hunters) Book 24
Reviewed in the United States on 28 February 2021
Verified Purchase
This book series of Krewe of Hunters does features new characters and they are three brothers, Bryan, Bruce, and Brodie McFadden, and the women they grow to love in the course of a paranormal crime investigation. Fade to Black, the first in the series, features the oldest brother, Bryan McFadden. Who did a private investigator for Jackson Crow and it was requested by their boss Adam Harrison.
Thus the book began in dramatic style include with many ups and down with the killings of actess in public. The cast of a popular older show, now in syndication, Dark Harbor, is participating in a Comic Con in West Hollywood. Four of the five stars desperately need the convention appearances. Marnie Davante, who had been the show's star, has moved on. Her true love is theater, but she appears at the conventions to help her former co-workers. But, Marnie's appearance doesn't exactly help this time when someone dressed as a popular comic villain confronts Marnie and slices her former TV mother, Cara Barton, to death.
How does Bryan McFadden become involved in an LA case, when he's based in Virginia? His mother, once a theater diva herself, pesters him into it. After a tragic accident that killed Maeve and her husband, Hamish, they're both ghosts who appear to their adult sons. The men, all former military, are talking about forming their own PI firm. At the same time, Bryan has worked on a kidnapping case with the FBI's Krewe of Hunters. He's been invited to join, but hasn't discussed it yet with Bruce and Brodie. Bryan's mother knows he's at loose ends, and she asks him to go to LA and protect Marnie. Cara has met with her old friend, and convinced her that Marnie was the original target at Comic Con.
Marnie wants nothing to do with Bryan McFadden when he shows up at Cara's funeral. She's had a horrifying week, watching her friend sliced to death. Then, Cara died in her arms. Marnie's answered questions from the police, arranged a funeral and reception. And, at the cemetery, she's seen the ghost of the dead woman, who now talks to her. No, she's not ready to believe in ghosts. She's not ready to trust McFadden. And, she's certainly not ready to believe she's the target of a killer.
A shattered window, a shooting, and another murder prove to Marnie that she might be in trouble. The fast-paced romantic thriller brings together two strong-willed people who are attracted to each other. As always, Graham gives readers plenty of action, suspense and romance. She creates intriguing characters, and often surprises readers with the villain. But, I'm looking forward to returning to the second brother, Bruce McFadden. Also, to know who the next lady will become and how the case will be solved.