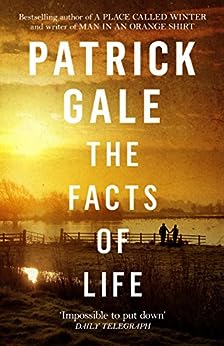 The Facts of Life Kindle Edition

Absorbing . . . deftly characterised, deeply involving and relevant - The TimesA monumental feat of imagination, achingly true and beautiful. I'd be hard pressed to recall the last time a novel so totally captivated meGale's best and most complex novel - New Statesman[An] extraordinary blockbuster of a novel --This text refers to the paperback edition.

Patrick Gale was born on the Isle of Wight. He spent his infancy at Wandsworth Prison, which his father governed, then grew up in Winchester before going to Oxford University. He now lives on a farm near Land's End. One of this country's best-loved novelists, his most recent works are A Perfectly Good Man, the Richard and Judy bestseller Notes From An Exhibition, the Costa-shortlisted A Place Called Winter and Take Nothing With You. His original BBC television drama, Man In An Orange Shirt, was shown to great acclaim in 2017 as part of the BBC's Queer Britannia series, leading viewers around the world to discover his novels. --This text refers to the paperback edition.

‘It is impossible to put “The Facts of Life” down. A rural English blockbuster. It is beautifully done’ Daily Telegraph

‘Patrick Gale offers us so much more than facts in this extraordinary blockbuster of a novel. Its exploration of family ties and tyranny is encompassed within a deft narrative. Much like the late Ivy Compton-Burnett, Gale presents us with a family saga which both questions and defies present day morality. Always fluent, Gale manages to be both brutal and witty. His analysis of the family tree is rooted in compassion and insight and expounded resoundingly well’ Time Out

‘Gale’s best and most complex novel. Gale is both a shameless romantic and hip enough to get away with it’ New Statesman

Patrick Gale was born on the Isle of Wight in 1962. He spent his infancy at Wandsworth Prison, which his father governed, then grew up in Winchester. He now lives on a farm near Land's End. His most recent novels are The Whole Day Through and the Richard & Judy bestseller Notes from an Exhibition. --This text refers to the paperback edition.
Read more

i love books
5.0 out of 5 stars Loved this book
Reviewed in the United Kingdom on 1 February 2018
Verified Purchase
Gale is a master of his craft. Yet again I was swept along by the characters . I needed to know what happened to these compelling crew. The pieces of the jigsaw slotted together seamlessly but I only vaguely guessed where each piece fit. I think this was one of his best books. I only have one more to read - 2 are on pre- order. Think I will have to start reading them all again
Read more
One person found this helpful
Report abuse

jane craft
2.0 out of 5 stars ?
Reviewed in the United Kingdom on 10 August 2018
Verified Purchase
I enjoyed the first part of the book, the second part got very sordid I felt. I am not a prude but this was too much for me and I didn't finish the book. This is very unusual for me as once I have started a book I can't help but go to the end. Disappointing.
Read more
One person found this helpful
Report abuse

Colin Hutchinson
5.0 out of 5 stars Absorbing and difficult to put down.
Reviewed in the United Kingdom on 16 May 2021
Verified Purchase
Every great writer is a story teller at hear and what a brilliant story teller Patrick Gale is. Excellent plot and so easy to read with a vocabulary which was quite magical and flowed like honey. The subject matter was difficult but the writing provided understanding , sympathy and honest truth.
Read more
Report abuse

Cliente Kindle
5.0 out of 5 stars The gift of storytelling
Reviewed in Italy on 21 October 2020
Verified Purchase
I simply loved it. From the beginning to the last page.
Read more
Report abuse
See all reviews
Back to top
Get to Know Us
Make Money with Us
Let Us Help You
And don't forget:
© 1996-2021, Amazon.com, Inc. or its affiliates