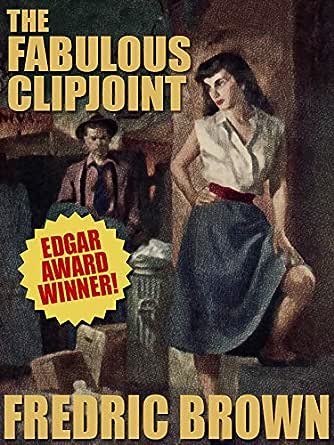 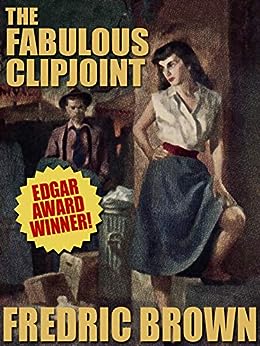 Fredric Brown (1906 1972) was the only writer to achieve equal prominence in the mystery and science fiction genres. His first foray into mystery, "The Fabulous Clipjoint", won the Mystery Writers of America s Edgar Award for Best First Novel. Brown was also the acknowledged master of the short short story; the famous collection "Nightmares and Geezenstacks" demonstrates his consummate mastery of a form limited to no more than five hundred words. His short story Arena was the basis of a famed "Star Trek" episode; Martians, Go Home! was adapted for a 1992 film; The Last Martian was adapted for Serling s "Twilight Zone" and starred Steve McQueen at the start of his career. Brown s work, more than forty years after his death, is increasingly prominent. --This text refers to an alternate kindle_edition edition.

Paul S
5.0 out of 5 stars Wow, a terrific, atmospheric & evocative American crime thriller written in the late 1940s.
Reviewed in the United Kingdom on 8 February 2019
Verified Purchase
The Fabulous Clipjoint is a wonderfully evocative crime thriller. It has an intriguing plot and some truly wonderful characters (although you wouldn't classify all of them as being particularly nice individuals!). The plot follows an investigation by an 18 year old Ed Hunter and his 'carnie' uncle Ambrose into the murder of the lad's alcoholic father in a seedy part of Chicago. But besides being a crime thriller it is also a 'rites of passage' story as through the course of the tale Ed matures into an adult.
It is a very atmospheric thriller and the writing is so good you can easily imagine the various scenes and situations described in the novel. However, the story contains quite a few slang terms that obviously were in everyday use in the USA in the 1940s but are no longer used today, and some of them do not appear in the Kindle dictionary. However, you can find them with a search on Google and it is worth looking them up as they add to the ambience and understanding of the story.
So I would highly recommend this book if you enjoy reading hard boiled, noir, crime fiction or if you are looking for something slightly different from the 'hi-tech', action packed and / or psychological crime thrillers that seem all the rage these days. The Fabulous Clipjoint will transport you to a bygone age of Carnies (carnival workers), gangsters, hoodlums, smokey bars, jazz music & diners that are open twenty four hours a day through its wonderfully atmospheric & pithy style of writing. I can well understand why it won the prestigious Edgar Allan Poe award for best first novel by an American author (in 1948).

Chris Fenner
5.0 out of 5 stars Superior Pulp
Reviewed in the United Kingdom on 6 February 2018
Verified Purchase
A snappy writer; first discovered him in an anthology of "pulp fiction" stories, his being "Obit for Obie". Worth reading more.
Read more
Report abuse

Ron Zack
4.0 out of 5 stars Very nice first novel
Reviewed in the United States on 27 December 2017
Verified Purchase
In The Fabulous Clipjoint, Fredric Brown spins a great story with most of the elements of noir fiction as written in the 1940’s. This is the first in what became a series featuring Ed and Ambrose Hunter, a nephew-uncle team who solve a mystery in more ways than one. It is a bit short on violence for me, but the matter-of-fact way narrator Ed describes a killing he accomplished is classic.

There is drinking, murder, inadequate police investigation, relationship issues, and a suggestion of sex. Barely an adult, Ed is schooled by his carney uncle, in human nature and life in general. There are some great hard-boiled type lines like, “They were nice arms for a sleeveless dress, and she was wearing a sleeveless dress,” or “She came back looking like a million bucks in crisp new currency.” Lines that make me think of Humphrey Bogart.

The book is also a father-son story and a rite of passage story. Ed transitions from boyhood to manhood and discovers things about his father’s life he never knew while his father was alive. Although filled with regrets, they are never dwelled on, as Ed plows forward in life and learning.

The story is well-developed, consistent, and clever. I did not expect the ending. The author hit the mark on several levels. I am looking forward to reading the other books in this series.
Read more
3 people found this helpful
Report abuse

fabulous_clipjoint
From ABE
In The Fabulous Clipjoint, we see why Frederic Brown was one of the greatest short story writers and novelists of the 20th century. Brown wrote hundreds of short stories, some of the best were collected in Honeymoon in Hell. He’s the author of Martians Go Home, one of the first science fiction novels to explore the loss of privacy in the modern world. He also appeared twice on Karl Edward Wagner’s famous “Best” lists in the early 80’s. Clipjoint is the first of seven novels to feature the investigative team of Ed and Am Hunter. It also won an Edgar Award by the Mystery writers of America when it published in 1947 (The novel was initially published as “Dead Man’s Indemnity” in 1946 by Mystery Book Magazine).

Ed Hunter is a young man who is busy learning the printing trade in Chicago. He lives with his father, a Linotype operator, his stepmother and stepsister in an apartment in the working class section of Chicago, Illinois. One night his father is killed on his way home in an apparent bungled robbery attempt. Ed’s life is thrown into a spiral as his mother will now have to begin working and his younger stepsister may not need the adult supervision she needs. Ed can only think of one thing to do. Since the police don’t want to spend too much time in the murder investigation, he must go see his uncle Ambrose Hunter who works just outside Chicago.

Ed’s Uncle Am turns out to be a carnie, or carnival operator, who works the circuit all over the United States. He’s had little to do with the family, but Ed feels he’s the only one who can find out who really killed his father and why. Along the way, he learns a lot about life and has a chance to view the world outside the city of Chicago, although most of the action takes place in the city. This is a tightly crafted piece of writing and premium example of Brown at the mastery of his game.

One of the things I enjoyed about this book is that it gives you a sense of what it was like to live in a working class household right after WW2. All the big economic expansions of the post war years had yet to take off and most people still lived in rental property. The big boom in home ownership, which characterized the 50’s, was yet to take place. Ed is just out of school and has no more ambition than to become a printer. So much has been digitalized that the entire printing industry is on its way to becoming a relic. For instance, his father’s profession: who the heck even remembers what a Linotype machine does?

Brown shines when he shows the difference in the world of cozy mysteries as opposed to the noir crime fiction, which became vogue in the next few years:

“I went in the living room and picked up a magazine. It was starting to rain outside, a slow steady drizzle.

It was a detective magazine. I started a story and it was about a rich man who was found dead in his hotel suite, with a noose of yellow silk rope around his neck, but he’d been poisoned. There were lots of suspects, all with motives. His secretary at whom he’d been making passes, a nephew who inherited, a racketeer who owed him money, the secretary’s fiancé. In the third chapter they’d just about pinned it on the racketeer and then he’s murdered. There’s a yellow silk cord around his neck and he’s been strangled, but not with the silk cord.

I put down the book. Nuts, I thought, murder isn’t like that.”

This is an excellent book and the plot makes me want to read more in this series.

[...]
Read more
3 people found this helpful
Report abuse
See all reviews
Get FREE delivery with Amazon Prime
Prime members enjoy FREE Delivery and exclusive access to movies, TV shows, music, Kindle e-books, Twitch Prime, and more.
> Get Started
Back to top
Get to Know Us
Make Money with Us
Let Us Help You
And don't forget:
© 1996-2020, Amazon.com, Inc. or its affiliates