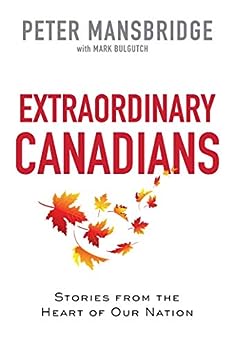 Extraordinary Canadians: Stories from the Heart of Our Nation Kindle Edition

by Peter Mansbridge (Author) Format: Kindle Edition
See all formats and editions
Sorry, there was a problem loading this page. Try again.
Read more Read less
Previous page
Next page
Due to its large file size, this book may take longer to download

"A welcome exposure to an abundance of goodness afoot in Canada . . . Fresh and illuminating . . . The book especially deserves its own stamp of 'extraordinary'."
-- Winnipeg Free Press

"[A] remarkable collection of personal stories about Canadians, many of them unknown to the wider national community, who have helped make this country a better place for all."
-- National Post

"[A] wide range of inspiring stories from the perspective of seventeen Canadians who aren't necessarily well-known but have made a difference in their own ways across the country."
-- The Canadian Press

"One of the book's many strengths is the way the authors let their subjects discuss their achievements. within the full context of their lives, alongside failures, frustrations, and disappointments of all sorts. The achievements are diverse in nature, but share a theme: they found their strength and calling, in fighting conditions that initially seemed insurmountable. The range and diversity of the subjects is a tribute to their legwork-- and the composition and diversity of this country. It is in essence a love letter to his country."
-- Policy Magazine

"Three words describe the Canadians whose stories are told in this book: courage, resilience, and imagination. The courage to face the unthinkable and take on the impossible. The resilience to pick up when things go wrong and carry on. And the imagination to find new ways of living and giving. These heroes, sung and unsung, teach us what is to be a Canadian. An entertaining and uplifting read."
-- BEVERLEY McLACHLIN, former Chief Justice of Canada and bestselling author of Truth Be Told

"This collection of greats is astounding. It shows what Canadians do: we think of others and act selflessly, and with great and quiet courage. Superheroes like First Nations children's advocate Cindy Blackstock and Anishinaabe endocrine surgeon Nadine Caron swelled my chest, assuring me, that they, too, the best of us in Indigenous country, have dedicated their lives to make this nation one of the best in the world. As I read through these pages, I felt that each person formed infinite branches of an eternal maple tree, flickers of the flame that burns bright upon Parliament Hill and within the hearts of all of us."
-- JESSE THISTLE, #1 bestselling author of From the Ashes

Peter Mansbridge is one of Canada's most respected journalists. He is the former chief correspondent for CBC News; anchor of The National, CBC's flagship nightly newscast where he worked for thirty years reporting on national and international news stories; and host of Mansbridge One on One. He has received over a dozen national awards for broadcast excellence, including a lifetime achievement award from the Academy of Canadian Cinema & Television. He is a distinguished fellow of the Munk School of Global Affairs & Public Policy at the University of Toronto and the former two-term Chancellor of Mount Allison University. In 2008, he was made an Officer of the Order of Canada--the country's highest civilian honour--and in 2012 he was awarded the Queen Elizabeth II Diamond Jubilee Medal. He is the author of the instant #1 national bestseller Extraordinary Canadians and also the national bestseller Peter Mansbridge One on One: Favourite Conversations and the Stories Behind Them. He lives in Stratford, Ontario. Follow him on Twitter @PeterMansbridge, visit him at ThePeterMansbridge.com, or listen to his daily podcast, The Bridge, with Sirius XM Canada.

Mark Bulgutch is a journalist, educator, speaker, and the author of the instant #1 national bestseller Extraordinary Canadians and also That's Why I'm a Journalist and That's Why I'm a Doctor. He worked for CBC for forty years, eleven as the senior editor of The National and another ten as senior executive producer of all live news specials. He has taught at the Ryerson University School of Journalism for almost thirty-five years. A regular contributor of opinion columns to the Toronto Star, he has won fourteen Gemini awards, four RTNDA Awards, the Canadian Journalist Foundation Award of Excellence, and the Canadian Association of Broadcasters Gold Ribbon Award. He lives in Toronto. Follow him on Twitter @MarkBulgutch. --This text refers to an alternate kindle_edition edition.

4.5 out of 5 stars
4.5 out of 5
153 global ratings
How are ratings calculated?
To calculate the overall star rating and percentage breakdown by star, we don’t use a simple average. Instead, our system considers things like how recent a review is and if the reviewer bought the item on Amazon. It also analyses reviews to verify trustworthiness.

John Eric Pollabauer
5.0 out of 5 stars Excellent reading about extra-ordinary ordinary Canadians
Reviewed in Canada on 8 December 2020
Verified Purchase
The authors did a great job in finding and writing the unique stories about candidates who are indeed very worthy of the title extra-ordinary Canadians. Not one of the extra-ordinary Canadians mentioned in the book took the easy way in achieving success and happiness. Time and time again the person beat all odds by not giving up and persevering with their unwavering belief in themselves and the people supporting them in their journeys. Yes, the message is you too can achieve much success in your life if you are committed to putting in the required work and effort and are patient for the results to appear.
Read more
Report abuse

fondof
5.0 out of 5 stars Astonishing Delivery- Very nice book Presentation
Reviewed in Canada on 11 November 2020
Verified Purchase
The book was supposed to be rready to sale on November 10- It arrived the very same day !
17 stories - real stories told by those who lived them. Great book !
Read more
2 people found this helpful
Report abuse

heffleyjack
5.0 out of 5 stars Short stories about remarkable Canadians
Reviewed in Canada on 6 February 2021
Verified Purchase
Excellent read. Inspiring individuals who often rose above serious challenges to contribute to others and their country. Makes you proud to be a Canadian.
Read more
Report abuse

JANET L MUENZBERGER
4.0 out of 5 stars It's an easy read...in the first person.
Reviewed in Canada on 12 February 2021
Verified Purchase
I like that Mr. Mansbridge featured a wide variety of Canadians from different backgrounds . These would not be people you'd typically hear about in the news, but they are all fantastic contributors to our society.
Read more
Report abuse

Kevin McNamara
5.0 out of 5 stars Super read and Informative
Reviewed in Canada on 5 December 2020
Verified Purchase
It was great to read about Canadians who contribute so much but are not normally highlighted on a national stage.
Read more
Report abuse
See all reviews
Back to top
Get to Know Us
Make Money with Us
Let Us Help You
And don't forget:
© 1996-2021, Amazon.com, Inc. or its affiliates