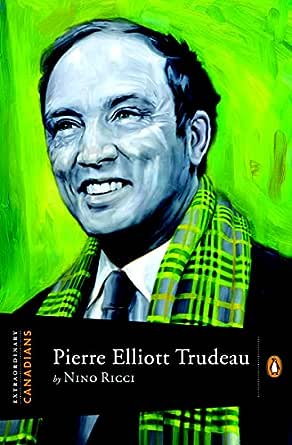 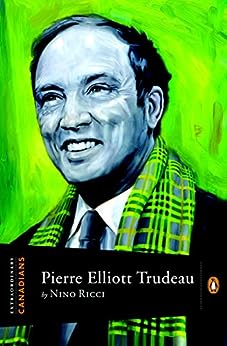 Love him or hate him, Pierre Trudeau has marked us all. The man whose motto was "reason over passion" managed to arouse in Canadians the fiercest of passions of every hue, ones that even today cloud our view of him and of his place in history. Acclaimed novelist Nino Ricci takes as his starting point the crucial role Trudeau played in the formation of his own sense of identity to look at how Trudeau expanded us as a people, not in spite of his contradictions but because of them.

Nino Ricci’s novel Lives of the Saints garnered international acclaim and won a host of awards, including the Governor General’s Award for Fiction. It started the trilogy that was completed by In a Glass House and the Giller-nominated Where She Has Gone; it was also adapted as a miniseries starring Sophia Loren. Ricci’s novel Testament was the winner of the Trillium Award. His most recent novel is The Origin of Species, which won the Governor General’s Award for Fiction in 2008. He lives with his family in Toronto.
click to open popover

Theodore A. Rushton
5.0 out of 5 stars A great story about the sad man of Canada
16 October 2010 - Published on Amazon.com
In the American Southwest, the term for politicians such as Pierre Elliott Trudeau is "all hat and no cows;" or as I once wrote in describing a political wannabe in New Mexico, "a few cows short of a full herd."

What's the Canadian version? A few pennies short of a loonie? All hoot and no loon? This brief but very readable analysis of the politics of Trudeau struggles vainly to come to terms with a man Canadians wanted to love but eventually -- along with the rest of the world -- saw as a joke. Trudeau, like John Diefenbaker, are the Tweedledumb and Tweedledumber of the last 50 years. Both men were initially loved by Canadians who eventually learned their Prince Charmings were really merely two slippery poliwogs grasping for power.

To love Canada is to love diversity; the politician's love of power is to love oneself. Trudeau was the Jimmy Carter of Canada, but without the vision or intellect.

Instead of biography, Ricci perceptively analyzes of Trudeau's political highlights, a man who was clever by too far and deeply in love with his own cleverness. Trudeau was blind to the desire of Canadians who want a nationalistic definition of why they are not Americans, Englishmen, French or others -- but are united as separatists. It's not a nationalism of smug superiority, empire, wealth or a right to rule lesser folks. For a century after the War of 1812, we were "not Americans." For the past century, nationalism in Canada asks, "Okay, then who are we?"

Ricci details how Trudeau grew up with this sentiment, a natural youthful rebel against any and all outside domination. Then Trudeau went to Harvard, the elite finishing school for American politicians, and returned as an eventual Liberal Party apparatchik and loyal supporter of the Ogdensburg Agreement. Trudeau's insouciant nationalism sums up the frustration of Canada.

Diefenbaker never got beyond "My fellow Canadians." Pearson never got beyond his flag. Trudeau, as Ricci makes clear -- whether he meant to or not -- simply never "got it." Just as he was made into an international joke by Margaret, he was likewise seduced by his desperate passion for power.

Ricci is an astute and perceptive analyst of Trudeaumania, which makes this book a gem in understanding this toothless lapdog of Canadian identity. Maybe it's the role of a writer, not a politician, to clearly define a nation's unique and clearly distinct identity. If so, the opening chapters are an ideal place to start; the rest of the book explains what goes wrong when the task is entrusted to a politician -- as it has been since 1957.

Perhaps Ricci can so define Canada; if not, the person who does will likely have started with this book. It's that good in its portrayal of a frustrating politician.