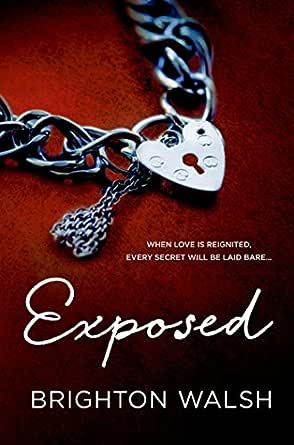 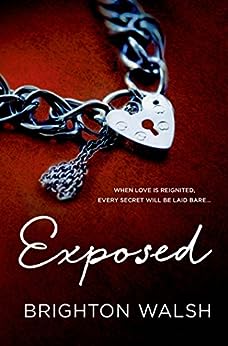 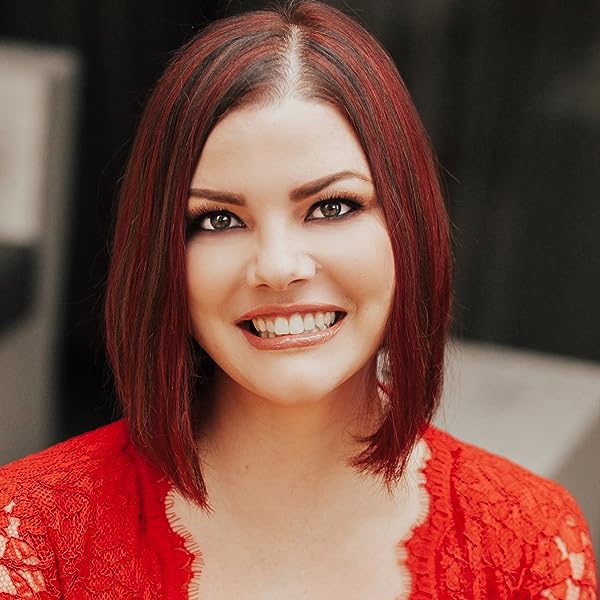 Brighton Walsh spent nearly a decade as a professional photographer before deciding to take her storytelling in a different direction and reconnect with her first love: writing. When she's not pounding away at the keyboard, she's probably either reading or shopping-maybe even both at once. She lives in the Midwest with her husband and two children, and, yes, she considers forty degrees to be hoodie weather. Her home is the setting for frequent dance parties, Lego battles, and more laughter than she thought possible. --This text refers to the paperback edition.

Sandy S.
TOP 1000 REVIEWER
3.0 out of 5 stars 3.5 stars-heroine's backstory somewhat incomplete
Reviewed in Australia on 22 July 2015
3.5 stars--EXPOSED is the second installment in Brighton Walsh’s new adult, contemporary CAPTIVE romantic, suspense series. This is Evie and Riley’s storyline-a second chance for two people ripped apart by someone else’s greed and anger. EXPOSED can be read as a stand alone without any difficulty. Riley is Gage’s (Ghost) younger brother, first introduced to us in CAPTIVE (book one). Any necessary information from the previous storyline is imparted where necessary.

Told from dual first person points of view (Riley and Evie) the storyline follows the rekindling of a relationship once thought dead and gone. Five years earlier Evie was presumed dead, and in the ensuing time Riley has placed all of his anger and grief into the mercenary lifestyle as part of a crew hired to enforce an illegal set of rules for anyone disobeying those in control. But Evie has been on the run; in hiding with a new name and identity, and a fiancé who knows very little about Evie’s previous life. When her picture is spotted in a social column, Evie’s life on the run begins anew, but this time Riley is the first one on the scene, to ensure Evie remains alive and a part of his future.

The relationship between Evie and Riley has already been established-high school sweethearts whose love for one another grew through their mutual connection to the ‘crew’- but the truth about Evie’s presumed death was kept secret from Riley-Evie had uncovered some information that had placed her life in danger, and to protect everyone she loved, Evie remained ‘dead’ and missing for close to five years. Riley’s anger begins to overshadow his love for Evie but when the truth is revealed, Riley becomes Evie’s number one protector and guardian. The $ex scenes are intimate and seductive; Brighton Walsh has upped the erotic factor with the release of book two. Evie tends to use $ex as a distraction both for herself and Riley, and Riley is never one to refuse what is being offered.

The secondary and supporting characters include Gage and Madison from CAPTIVE book one, as well as a number of former and current members of the ‘crew’. Frankie returns as part of the requisite evil on the hunt for Evie; and Aaron sides with Gage and Riley as they endeavor to protect Evie from Max-the man who has ordered Evie’s capture.

The world building continues to follow the members of the crew-a group of mercenary –style thugs and enforcers who are hired for any number of illegal reasons and threats. Although Gage is no longer a part of the crew, his involvement remains to try and protect his brother and the woman that he loves. Evie and Riley spend most of their time (and the story) together, stuck in an apartment where the walls begin to close in around them, and in this, the suffocation factor bled into my enjoyment of the storyline.

EXPOSED uses some memories, flashbacks, and nightmares to expose the reader to Evie’s life-the reasons she is on the run, and why she is reluctant to have any contact with her family. This particular portion of the storyline is a major factor in the character’s personality growth and background, as well as an issue that the author was hoping to bring attention to, but the development is somewhat incomplete.
Read more
Helpful
Report abuse
See all reviews

Erinarkin20
4.0 out of 5 stars This Should Be Your Next Read!
Reviewed in the United States on 18 November 2015
Verified Purchase
When I found out that Brighton Walsh was going to be writing a book about Ghost’s brother Riley I have to admit, I was so excited. We got a small glimpse of him in Captive but in Exposed, Walsh gives us so much more!

This book picks up shortly after Captive ends and I loved that we still get bits with Ghost and Madison. I always love seeing where characters are after the story ends. With that said, this book is about Riley and the one person he has yet to get over, even though she has been gone for 5 years, Evie. And when I say gone, I mean, he has thought she was dead.

In a desperate attempt to get away from the man who tried to kill her (their boss), Evie works with Ghost and another member of their crew to create a new identity and say goodbye to everything she has ever known…including the boy she loves, Riley. When her cover is blown, Evie is pulled back into a world where she is fighting to not only protect herself, but also the only people she has ever really trusted and loved.

As Riley finds out the truth, he doesn’t stop to think. He just gets on his bike and goes to get Evie because he knows she needs him. I loved seeing that side of him but as he realizes that Ghost was in on the secret, the betrayal he feels is overwhelming. Unfortunately for all, Max is again after Evie and in order to protect her until they can come up with a plan, Evie and Riley have to hole up in a friend’s apartment.

There are a number of layers to this story. The first being the thing that Evie knows that put her on Max’s radar to begin with. I won’t say what it is but all you need to know is that in order to get out of the trouble she is in, she has to find out more and come up with some leverage.

There is an aspect of this story that won’t be for everyone but I thought Walsh did a wonderful job of conveying the impact it had on the character’s story without making it the focal point. The past plays a huge role in this story and Evie has something in her past that makes it not only difficult for her to trust, but also difficult to give up control. This is something that creates some challenges in the relationship that Riley and Evie have. That wasn’t always the case but Riley is a different person than he was 5 years ago and that is an adjustment for them both.

A good portion of the story takes place with these two in a confined space and I loved seeing them get to know each other again as well as realize that they are still very much in love with each other, regardless of what they have been up to for the time they have been separated. As secrets are revealed and things begin to come to a head with Max and the crew, Riley, Evie, and Ghost have to come up with a way to survive.

Overall I thought this story had a great mix of suspense, action, and romance. Walsh always does a wonderful job of developing characters and mixing in the sexy times with a great story. If you are looking for a story with all of this, definitely check it out. If you haven’t read Captive, don’t worry. I read both and while there is overlap on the characters, the stories are separate. With that said, you should definitely read it, and everything else Walsh writes, when you can.
Read more
One person found this helpful
Report abuse

Wow. I’ve only ever read two books by Brighton Walsh (because I’m behind in finding her) but I’m coming to realize that she’s one of those authors whose words reach within me. She can pull me right in with seemingly no effort and keep me there. In a person like me, who is very picky about writing styles that can captivate me, she passes my test each time.

“After twenty-two years, I’d come to the realization that people only saw what you let them see. Or, more apt, what they wanted to see. Generally the pretty, skin-deep things that didn’t make them uncomfortable. They didn’t look for the messy, ugly parts. . . the dark, twisted secrets hidden away. The skeletons inevitably buried in everyone’s closets.”

Evie has invented a new life after she ran from her last one. Nothing is real and she’s begun to lose track of herself; forgetting her real truths with all the lies she gives. But her past and her present are soon jumbled together at once, when she’s forced to rely on an old flame for her safety. Riley used to be her everything. They went on jobs together, and held each other most nights as they came down from the adrenaline. Young teenage love that consumed them both. But without Evie in his life for the past five years, he’s dug himself deeper into that life to forget her, for revenge, to keep breathing. And the feelings that they have for each other haven’t dimmed, if anything they’ve gotten greater.

“I knew that voice. I recognized it as sure as I’d recognize my own face. Because it was a voice I’d heard in my dreams too many times to count. When my dreams were dreams and not the nightmares that so frequently plagued me, it was his face I saw. His voice I heard. His body I felt. It was him. It was always him.”

Second chance romances are one of my favorite kinds for the emotions they bring out. With Exposed, you really get that big emotional surge of sexual tension, emotional tension that overwhelms you when they come face to face again. This is more than just a story of a girl needing to be protected by a guy she used to see. It’s about a girl who has fought so hard against demons that she’s created more than just one fake life. This book is about her finding her one true life, merging them together, and finding her inner peace. The tough girl letting down that battle armor to be happy. I really enjoyed Evie’s journey, and what Riley was for her. It was suspenseful (in more ways than one), emotional, and truly sexy. Ms. Walsh is an auto buy for me.

“I wanted to consume her. Because for the past seven years, she’d been consuming me.”

Jo
3.0 out of 5 stars Just okay
Reviewed in the United States on 5 August 2015
Verified Purchase
Great sex but took about 28 chapters to get to what the book was actually about.
Read more
Report abuse
See all reviews
Get FREE delivery with Amazon Prime
Prime members enjoy FREE Delivery and exclusive access to movies, TV shows, music, Kindle e-books, Twitch Prime, and more.
> Get Started
Back to top
Get to Know Us
Make Money with Us
Let Us Help You
And don't forget:
© 1996-2020, Amazon.com, Inc. or its affiliates