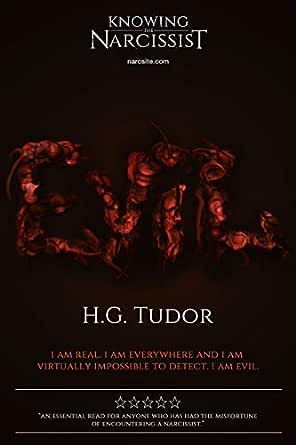 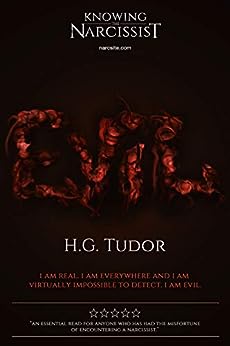 I am real. I am everywhere and I am virtually impossible to detect.

Learn who I am, what I am and most of all what it is that I do that is so evil.

Reading this may be your only chance to avoid being a victim.

Sarah
5.0 out of 5 stars Exactly what you need to hear to close the narcissistic chapter of your life!
10 December 2018
Format: Kindle EditionVerified Purchase
I have read widely on narcissism and yet a number of the assertions in this chilling and honest piece of writing both informed and shocked me. You cannot put a price on insights like this from the mind of a Narcissistic Psychopath - this book will make you want to close the door, run away and not look back! A must read!
Read more
Helpful
Comment Report abuse

Kindle Customer
5.0 out of 5 stars Good
23 January 2017
Format: Kindle EditionVerified Purchase
Excellent read.Easy to understand and helpfull..Anyone who has had a narcassist in there life she read this..honest and accurate for sure..
Read more
Helpful
Comment Report abuse
See all 2 customer reviews
Write a customer review

V
5.0 out of 5 stars V on Evil
9 December 2015 - Published on Amazon.com
Format: Kindle EditionVerified Purchase
I've been reading on narcissism/ border lines/ trauma bonding/ Stockholm syndrome/co-dependency and misoginy for 4.7 years. It's been a brutal search for info and anything I can get my hands on to understand. If you've been confused and worn down long enough you get what I'm saying immediately. All the literature, counseling, education I've obtained has all been worth it, but nothing, and I mean nothing explains it better than HG TUDORS books. It is valuable, valuable precious insight to hear it from a man who lives this life. No other literature I've ever read has done this. It's exactly what I needed to read. Something wasn't entirely clicking before.... I would still drift into fantasy and well... Hope my N would see the light, or I would break and make contact again. For the first time I'm not tempted to do that. My only warning is because his writing is shocking, brutally painful and sadly real it's only going to change things for you if you're totally willing to see the truth and live in reality.
It's not fun or pretty, but it's honest.

Chaelmom
5.0 out of 5 stars HRH H G TUDOR, THANK YOU! A MUST READ. PLEASE MAKE AVAILABLE IN PAPERBACK! (you know I have read your books, HG)
18 January 2017 - Published on Amazon.com
Format: Kindle EditionVerified Purchase
HRH H.G. TUDOR, PLEASE, PLEASE, PLEASE MAKE THIS BOOK AVAILABLE IN PAPERBACK. IT IS PRICELESS, YET DIFFICULT TO READ AS AN EBOOK BECAUSE OF (MY) VISUAL DISTURBANCES. NOT YOUR PROBLEM, HOWEVER I WOULD BE PURCHASING MULTIPLE COPIES AND AMAZON-ING THEM TO SO MANY FRIENDS AND FAMILY WHO DESPERATELY NEED THIS INFORMATION. IT WOULD BE SO MUCH MORE EFFECTIVE IF AVAILABLE IN HARD COPY, ONE COULD HIGHLIGHT, AND ANNOTATE RIGHT ON A PAGE. THIS SMALL BOOK WASTES NO TIME GETTING RIGHT TO THE POINT WITH "LISTS" OF BEHAVIORS THAT WILL SHOCK AND DISTURB, YET VALIDATE THAT YOU, THE EMPATH, ARE NOT INSANE! THERE IS NO LOGIC OR REALITY BASE (except to obtain fuel, and promote his personal agenda) TO THE NARCS RAGE, DETACHMENT, ENTITLEMENT, SUPERIORITY, OMNIPOTENCE, DESIRE TO PUNISH, MANIPULATE, LACK OF EMPATHY OR ACCOUNTABILITY, ATTENTION SEEKING, BLAME SHIFTING, UNFEELING OR CARING, (ABOUT ANYTHING BUT HIMSELF) AND THERE IS NOTHING YOU CAN DO TO CHANGE THAT, NOT EVER! Now that dysfunctional relationship you have been entrenched in that has agonized, frustrated, tortured, humiliated and confused you to distraction will finally make sense. IT IS ALL ABOUT HIM, HE IS TOXIC, PATHOLOGICAL, EVIL, EVIL, EVIL; YOU MUST DISENGAGE, GET HELP, AND HEAL. IT STARTS HERE! (I have purchased several of these eye opening books.) BEST INFORMATION ON NPD AVAILABLE!
Read more
11 people found this helpful

Deb Lindstrom
5.0 out of 5 stars BEEN THERE...
16 January 2016 - Published on Amazon.com
Format: Kindle EditionVerified Purchase
I like how HG has provided very explicit, graphic examples of narcissistic behaviours, and in a wide variety of examples.

My first husband was "eat up" with narcissism, and although the faces and individual circumstances may have variation from narcissist to narcissist, the basic underlying behaviours all come from this same condition.

A few discrete examples in my experience with my first husband include (I married the first time when foolishly young) include:

-Being a pathological liar,
-His sitting at kitchen table going through my purse when he thought me asleep in bed early in the morning,
-His accusing me of being unfaithful while HE was doing just that...
-Very successful, and his looks helped that.

I could go on and on.

Sadly, our son is now very much like his father, which is uncanny because our son was raised mostly by me, except for two years during which he wanted to try living with his father. It was an utter disaster for my son.

I tried to use only vague terms to reason with my son why his going to live with his father was a bad idea, but my moral standards wouldn't allow me to bad mouth his father to our son, so against my better judgement, our son went to live 1200 miles away with his father. Total disaster.

His father would only send our son back to me immediately on condition he not have to pay any support for our son, and this man earned 5 times what I did.

I couldn't allow our son staying another day in that environment another day, plus I reasoned this would be all the less continuing communication I would have to have with his father, so I conceded.

Since then, our son has picked up his own manipulative bag of tricks in interacting with me. He is now 42 years old, and has continued to attempt to manipulate me with ultimatums (if I don't give him "X,"); he will play very friendly with me, making me think he has changed his tune and then having got me reeled in again with my defenses down, he will pull the metaphorical "bitch slap" routine on me, totally out of the blue, with some passive-aggressive haughty and condescending remark about me sent via text (probably as he snicker out of view); he will try and alienate me from other family, make some of them his (often unwitting) lieutenants, forget what he has said to me; lie pathologically to me; making up stories about how crazy in the head if gotten with age, send inflammatory, accusatory text messages to me, and then block me so that I can't reply to defend myself, put words in my mouth, and give me weeks on end of the silent treatment.

That's where I'm at right now with my son, and have had to decide I will not continue in this subversive pattern of abuse.

From here on out, I refuse to attempt to plead with him and try to win "his approval" yet again.

So he made his bed and now he can lay in it. I hate to say this, but I must. I am gone. Life is too short. I will not be toyed with yet again.

Stick a fork in me because I am done; having been slow roasted by him and his father for more than 42 years now.

Good luck to all others out there.

Life IS TOO SHORT for this. Even from your adult child.

Debbie P
5.0 out of 5 stars Changed My LIFE
11 January 2016 - Published on Amazon.com
Format: Kindle EditionVerified Purchase
I'm really lovin' this guy (but not in the "we're soulmates" creepy kinda way) In that he has managed to piss me off, open my eyes, give me a laugh, and sink those painfully obvious words IT WAS ALL AN ILLUSION. I DIDN'T LOVE YOU....right through my brain. I've read mostly all these books by this author and I gotta tell you the honesty has allowed me to go No Contact without the slightest regret. They (Narcs) are all alike. Its uncanny. HG Tudor gave me access into my ex's hateful, manipulating, gaslighting pea brain. I feel like a huge weight has been lifted off my back after reading this book and all his others on the same topic. !!
Read more
14 people found this helpful
Go to Amazon.com to see all 127 reviews 4.6 out of 5 stars
Get FREE delivery with Amazon Prime
Prime members enjoy FREE Delivery and exclusive access to movies, TV shows, music, Kindle e-books, Twitch Prime, and more.
> Get Started
Back to top
Get to Know Us
Make Money with Us
Let Us Help You
And don't forget:
© 1996-2020, Amazon.com, Inc. or its affiliates