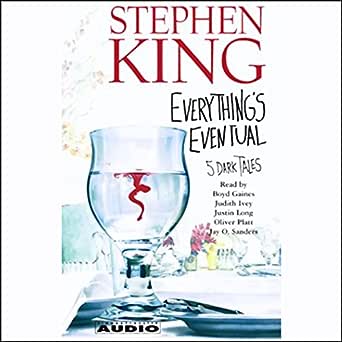 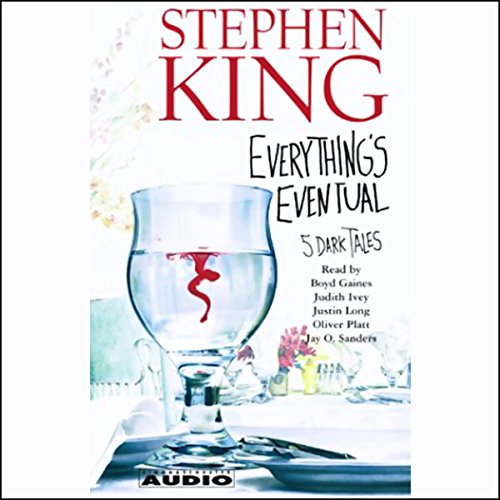 Mrs G Cooper
5.0 out of 5 stars Looks great
Reviewed in the United Kingdom on 28 November 2015
Verified Purchase
Took a while to arrive, but will make excellent gift, great price too.
Read more
Report abuse

Hammer + Jazz
3.0 out of 5 stars Very good journeys , satisfactory conclusions .
Reviewed in the United States on 7 April 2014
Verified Purchase
I've always deeply enjoyed the writing of Steve King . Particularly his short story collections . My preference in reading being collections of short stories (by various authors) . A good collection of essays or great journalism .
All the readers on this compact disc collection of five stories culled from Everything's Eventual do a terrific job of reading the material .
This ain't literature . You know that going in (hopefully) . These are , by and large , "good yarns" . Some significantly better than others .
Also in the cons column must reside the fact that only five stories from the collection are here . Additionally , it "appears" that two or more titles were selected for their relative brevity ?
My recommendation ? Buy the book
Read more
One person found this helpful
Report abuse

VT
4.0 out of 5 stars Good sound quality, cds not labeled well.
Reviewed in the United States on 12 May 2019
Verified Purchase
The stories are great on here but they all blend together. It’s hard to tell where one story ends and the other begins. The cds are not labeled with the story names on them and one cd could have 2 stories on it. Good sound quality but hard to find your place.
Read more
Report abuse

C. Posley
5.0 out of 5 stars Love it!!
Reviewed in the United States on 26 September 2017
Verified Purchase
I love these stories. The voice actors chosen are a great fit. I highly recommend this collection to all horror fans.
Read more
Report abuse
See all reviews
Back to top
Get to Know Us
Make Money with Us
Let Us Help You
And don't forget:
© 1996-2021, Amazon.com, Inc. or its affiliates