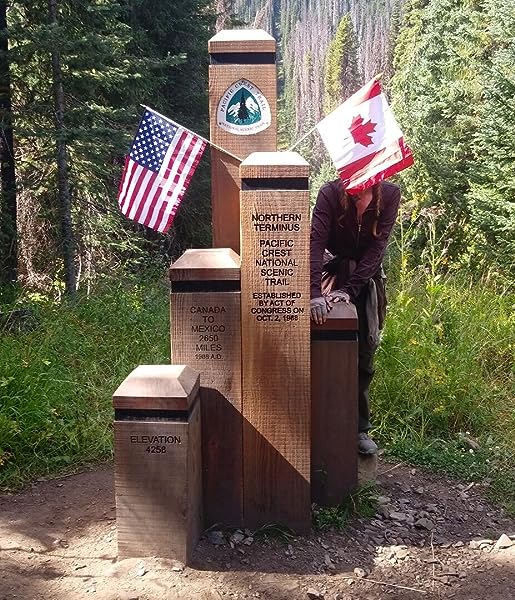 by Person Irresponsible (Author)
4.5 out of 5 stars 50 ratings
See all formats and editions
Sorry, there was a problem loading this page. Try again.

In 2020 the world went to hell in a handbag. This isn’t exactly headline news - although it was then. I went from perfectly locatable in the Cotswolds to utterly baffled in the American wilderness when I embarked on a quest to walk from Mexico to Canada for reasons that escape me. It was most probably nothing more dramatic than a mid-life crisis.

Perhaps I should have come ‘home’ but I lived in the deluded optimism the pandemic would all be over by the summer. Besides, I’d given up my home: shoving my belongings into storage, persuaded someone to look after my cat and someone else to look after my car. I did think about returning but each time I popped into civilisation to top up my supplies, I discovered a new reason to run for the hills. So 'home' became a tent: a mere flimsy bit of fabric to protect me from every conceivable terror that exists in the wilderness - bears, rattlesnakes, deserts, avalanches and other human beings. Most dangerous of all was the racket inside my head.

Everything you ever taught meis my journey, relying on nothing other than the twelve steps of recovery, teaching me to take it one day at a time, one step at a time, and one bloody ginormous mountain at a time as I staggered my way along the PacificCrestTrail. As mid-life crises go, I remain utterly clueless why mine took me from my sofa to the Canadian border via the fridge, powered only by two chubby legs and a fat arse.

Page 1 of 1 Start overPage 1 of 1
Previous page
Next page
Start reading Everything You Ever Taught Me on your Kindle in under a minute.

Female. Aged 46. Average height. Large rear. In the midst of a mid-life crisis. It probably began when I was about four. Hoping I'll overcome it one day. Can't afford a Ferrari, and I can't be bothered with an affair. I bought a quad-bike instead but then I sold that when I buggered off to America for six months to live in the wilderness.

Got into the recovery gig aged 41, almost by accident. So I'm now *that* boring divorcee, teetotaller, vegetarian and cat owner that absolutely no one wants to invite to their dinner parties.

Anyway, I wrote a book about walking from Mexico to Canada, whilst trying to stay sane during a pandemic. Please buy it - the cat is also in the throes of a mid-life crisis, as well as an existential one - probably since he was born. Vet bills are costly.

For pictures of my trip go to www.mlconaquad.com

Note well - no longer skinny like the bio picture implies.

Tim Mcdonough
5.0 out of 5 stars What a journey!
Reviewed in the United Kingdom on 14 August 2021
Verified Purchase
It was funny how I was almost willing her to go on, even though the book was written after she finished! It is a heartwarming tale of taking on a challenge with no real idea why you are doing it. My feet hurt just reading it. Walking that distance is hard enough in a straight line over level ground. Up and down moutnains, though deserts and ice fields, crossing rivers, relying on the kindness of others and realising that you could do anythig you put your mind to. If you're irresponsible enough!

Kindle Customer
5.0 out of 5 stars This book is a gem.
Reviewed in the United Kingdom on 1 July 2021
Verified Purchase
Written with wonderfully honest language, this book could almost end up in the Self Help department. Person Irresponsible takes us on a long, and at times lonely, walk up the West Coast of America. Inter woven with totally seeable descriptions of the mountains and valleys, the woods and deserts, and especially the tent condensation and variety of loo choice, I really felt I was on that walk. I loved meeting all the people she came across on the trail. The leaving of them, and the finding of them again further down the road! Apart from anything else, it's funny, and her self depreciating chatter also takes on the huge subject of Alcoholism and her tandem path to recovery. I cannot recommend this book highly enough. It's a gem.
Read more
4 people found this helpful
Report abuse

Vicky
5.0 out of 5 stars Insightful and engaging read
Reviewed in the United Kingdom on 22 October 2021
Verified Purchase
It’s a long time since I read a book that makes full use of the English language, and what a book! The first bit had me feeling emotional, followed by involuntary snorts at various points throughout. (I can make a good guess why a fellow hiker preferred to walk knickerless).

It was interesting to read about the 12 Steps and the author’s relationship with alcohol. I don’t know if other readers found this but I could relate to the 12 steps and other experiences in my life and how they can help. There was an amazing depth of self-insight and awareness on the author’s part with no edges to her character: someone who I feel would be good to have as a friend.

I felt quite privileged to be part of the journey that PI shared with us. What an inspirational woman and with such determination to do something and not give up: plus so self-deprecating in the way she went about it. It makes me wonder what she’s planning next?
Read more
2 people found this helpful
Report abuse

Cornwall Girl
5.0 out of 5 stars Inspirational and completely brilliant
Reviewed in the United Kingdom on 1 May 2022
Verified Purchase
This was delivered yesterday and already I cannot put it down. It's one of the best books I've read for ages. I'm approaching 60, drink too much am overweight (for my size) and am planning to go off next year and travel in our camper van. Life is too short. This book completely inspired me and I loved the writer's style, wit and language. I went online to look at the amazing photographs and was slightly disappointed not to learn the writer's identity, she certainly did not look 'fat'! I respected her wish to remain anonomous and admired it. I hope that Person Irresponsible does some more adventures and writes about them again! A huge new fan!
Read more
Report abuse

Miss C D Pritchard
4.0 out of 5 stars Upliting true biographical story with a very inspirational feel
Reviewed in the United Kingdom on 11 July 2021
Verified Purchase
Very inspirational true story and puts an end to the myth that Women are no longer 2nd class in this world
Read more
3 people found this helpful
Report abuse
See all reviews