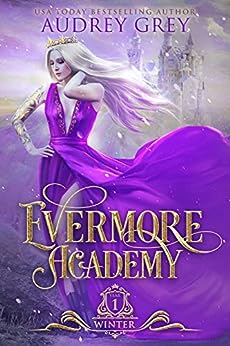 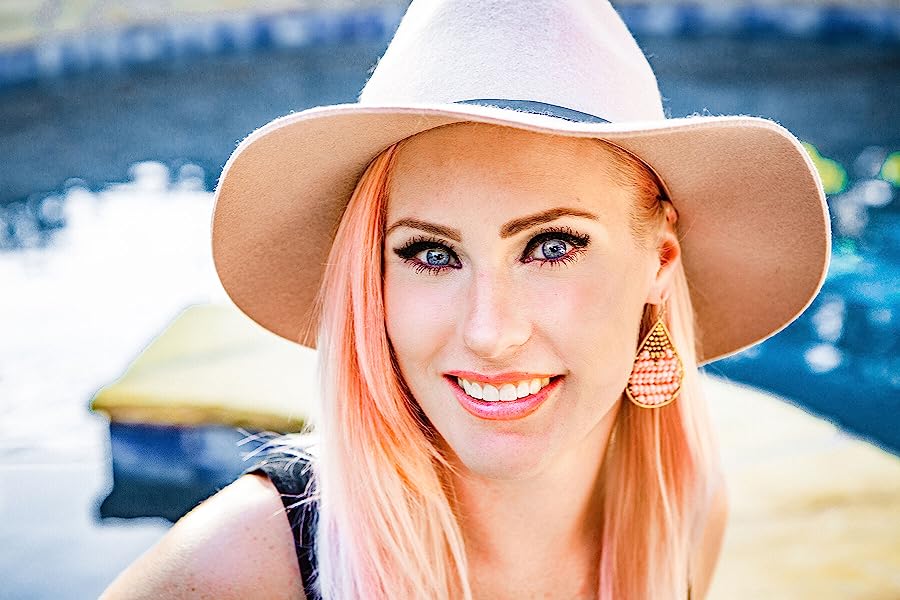 4.6 out of 5 stars
4.6 out of 5
378 global ratings
How are ratings calculated?
To calculate the overall star rating and percentage breakdown by star, we don’t use a simple average. Instead, our system considers things like how recent a review is and if the reviewer bought the item on Amazon. It also analyses reviews to verify trustworthiness.

Stephanie Poynton
4.0 out of 5 stars Such a fun read!
Reviewed in Australia on 19 May 2020
Verified Purchase
(received an ARC copy of Evermore Academy from the author in exchange for my honest review)

May include mild spoilers.

Reading the synopsis, I was so excited! Already, the tropes I love came flowing out and I couldn’t help but rub my hands in glee. Fae? Check. Academy? Check. A potential enemy to lovers storyline? Check. Check. Check. I’m a sucker for all these things, so yes, I was pretty excited when I got the message that I could review this book.

First chapter: very expository. Does well enough to set up the story but I don’t feel like I’m in the story. I’m being told all these facts and I’m being given all this back story, that I’m not sure is great for right at the beginning. That being said, the voice of the main character is great. She’s funny and sarcastic. Sometimes it comes across as if the author is trying too hard to make her relatable and witty, to the point where’s forced. However, that could be a personal opinion on my part.

The further in I got, however, my opinion changed. I really, really enjoyed Summer. Yeah, I cringed and suffered hella badly from second-hand embarrassment, but I really got to like her the further in I read. I had some issues: some of the swearing/cursing (for Fae’s sake, hell fire, Oberon’s luck) don’t fit for Summer, especially since she’s human, she hates the Fae, etc. they also seem like Fae curses, not human ones, and since she’s so anti-Fae why does she use them? That doesn’t seem in character; there are some points (like when she declares Cal Miller had a crush on her) that made me cringe and ask ‘okay, and?’. I got the ‘oh she’s so special but doesn’t know it and everyone loves her’ vibe from that one moment and it kind of made me stop reading and put the book down. However, I actually cheered when she punched Reina and part of me wanted to ship Summer with Mack. Not going to lie. Then the other part of me said ‘strong female friendship!’ Also, I thought the necklace was a gift from her parents, but it was actually given to her by the half-fae that took her memories?

Some of the world building and history is confusing. I don’t understand when the Lightmare happened, or how long Shadows have been part of Fae life. It doesn’t quite make sense. Shadows are made out to have always been there, but I thought humans only just became aware of the Fae? There was so much going on with the world, and though I found it super interesting (really like how different the storyline is. We’re basically thrown into the aftermath of the big-bad), the exposition and what information we’re given did come across as kind of contradictory.

I will admit I couldn’t get out of my analytical mindset while reading. I did get critical. I started reading it more like a beta reader than an ARC reviewer (and that’s probably because I’m revising two novels at the moment myself) but overall I thoroughly enjoyed this book. It definitely delivers on the ‘vampire academy meets cruel prince’ comparison, which was what drew me in in the first place.

I liked the way it was written because it isn’t overly pretentious in the way that you’re supposed to take every word of it seriously and like the author tried too hard writing it and making it perfect. It’s written like the author actually had fun with it and that’s how it’s supposed to be read. The beginning was a bit slow, but once I hit the half-way mark, I was totally invested. I’ve already recommended this book to my friend.

ALSO: some of my favourite quotes:
‘…tiny trash-talking lush.’
‘I slept with him and realised his bad boy persona compensated for a dull personality and a small dick.’ – I love Mack
‘Forget the Winter Prince. I need to find a boyfriend who dedicated a forbidden weapon to me.’

elysia.h
4.0 out of 5 stars Very enjoyable
Reviewed in Australia on 23 November 2019
Verified Purchase
I really enjoyed this young adult novel, it was predictable at times and unrealistic, but I still enjoyed it and look forward to the sequel
Read more
Helpful
Report abuse

Rachel @ The Rest Is Still Unwritten
5.0 out of 5 stars HOLLY BLACK EAT YOUR HEART OUT
Reviewed in Australia on 27 October 2019
Winter is the first novel in Audrey Grey’s new series Evermore Academy and is an absolutely sensational novel infused with passion, adventure and blossoming romance. The Cruel Prince meets Vampire Academy with a fabulous heroine and a swoon worthy love interest!

Summer Solstice lives in a world where she and those she loves struggle to put food on the table. It’s a stark difference to the opulent and luscious world of the Fae that mirrors the human one. Summer never expects to set foot in the land of the fae until one mistake sees her marked by the infamous Winter Prince for theft. The punishment for her crime? Drafted to Evermore Academy where humans are taught and trained to become shadows—the human protectors of the fae. What’s worse is that Summer’s fae keeper is none other than the cruel, arrogant and infuriating Winter Prince himself. Summer is sure she’s in for months of torture as the Prince’s shadow but what started out as punishment soon becomes something positive for Summer. If only she could figure out the Prince, who is caring one moment and cold the next. As something dark and dangerous looms over the academy, humans begin to die and Summer realises that the dangers within the academy are more than she first anticipated....including the danger of falling in love with a maddening fae prince who is all kinds of forbidden.

I absolutely LOVE Audrey Grey’s books—I’ve read every single one and have adored them all. So it’s saying something that I think the first instalment in the Evermore Academy series Winter is quite possibly her novel yet! Perfect for fans of The Cruel Prince and A Court of Thorns and Roses, Winter introduces readers to an intoxicating and beautifully written world of fae. Winter blends all the addictive elements of a great paranormal novel—action, danger, humour, romance—in an academy setting that is highly addictive.

The protagonist is Summer, a human girl is finds herself stepping into a whole new world when she is forced to attend Evermore Academy as penance for stealing from one of the fae. Summer was an awesome main character to follow! She’s intelligent and competent but also kind and noble. She genuinely cares about others and is willing to do the right thing at a risk to herself. I adored following her in this novel and seeing her stand up for herself against mean girls, cruel fae and infuriating princes. This is one heroine who just ticks all the boxes from the get go.

The world building within Winter is really enjoyable. I’m loving Audrey Grey’s take on the fae that explores an almost dystopian human world alongside a thriving, magical world of fae. The juxtaposition was enthralling and made for plenty of growth in our main character as she learnt of the fae history during her time at Evermore Academy. I’m looking forward to exploring more of the fae history and the darkling monsters in the rest of the series—-I can’t wait to see how Grey develops everything.

Summer’s love interest in this novel is the sexy Winter Prince, an intriguing and mysterious individual who is swoon-worthy and infuriating and deeply enigmatic. The Winter Prince and his motivations are very much a mystery during this novel. The chemistry between he and Summer is undeniable even as Audrey Grey keeps readers guessing as to the reasons behind many of his actions. The fire and electricity between Summer and the Winter Prince is magnetic and so addictive to read about—I devoured all the banter and bite between them and couldn’t help but want more each time.

Winter is a fantastically told academy tale. Academy novels have become all the range recently but it’s easy for authors to loose their storyline within the typical school setting. This is definitely NOT the case with Winter; quite possibly the best academy novel I’ve ever read as Audrey Grey infuses the story with fae mythology, tangible characters and a promising storyline.

As this instalment in the series comes to a close, I can’t wait to see what Audrey Grey has next for Summer and her Winter Prince in the next novel and second year of her attendance at Evermore Academy. Can’t wait to see what the feisty Summer gets up to next!
Read more
Helpful
Report abuse
See all reviews

Vix
5.0 out of 5 stars What the fae
Reviewed in the United Kingdom on 14 June 2020
Verified Purchase
Loved this story it has a stubborn kick ass lead and a mysterious alpha douche of a guy. Fantastic world building and side characters. Lots of mystery and action to keep you flying through the pages. Looking forward to reading second book. xxxx
Read more
Report abuse

Kindle Customer
5.0 out of 5 stars Amazing!
Reviewed in the United Kingdom on 12 January 2020
Verified Purchase
Amazing book, can't wait for the next one!
Read more
2 people found this helpful
Report abuse

Faye
5.0 out of 5 stars Evermore..
Reviewed in the United Kingdom on 5 May 2021
Verified Purchase
What a journey... Ive laughed and cried and felt summers anger and shock through the whole book. I love this series already and can't wait for year two now!
Read more
Report abuse

Kindle customer x
5.0 out of 5 stars Lovely read
Reviewed in the United Kingdom on 29 January 2020
Verified Purchase
If yI like fantasy books this is definitely the one for you ! Lovely storyline a bit predictable but lovely nonetheless I can’t wait for book two 😊
Read more
Report abuse

Jessa Moore
5.0 out of 5 stars Could not put this book down and definitely didn't want to!
Reviewed in the United Kingdom on 13 October 2019
Verified Purchase
DEVASTED to find out about a fantastic book when it's actually released, how am I supposed to cope waiting now!

Funny and loveable main character, love interest who has immediately become my only type all none fae please step aside and a world you can easily get lost in without feeling lost. I literally can't wait for the next one, give it to me now PLEASE
Read more
One person found this helpful
Report abuse
See all reviews
Back to top
Get to Know Us
Make Money with Us
Let Us Help You
And don't forget:
© 1996-2021, Amazon.com, Inc. or its affiliates