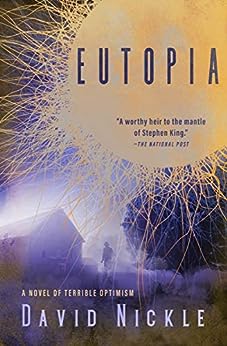 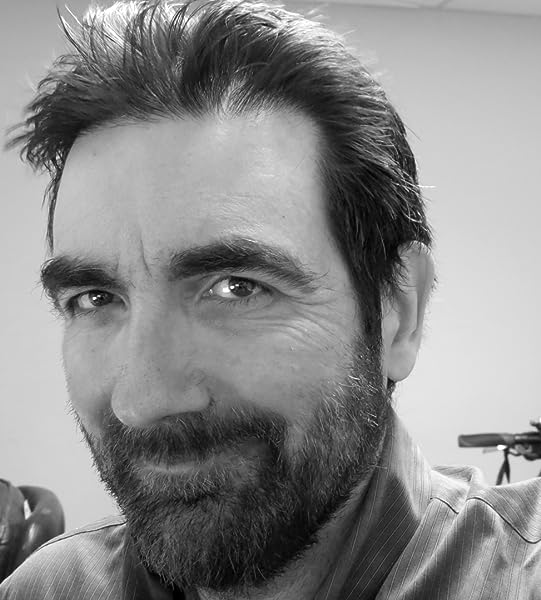 Eutopia: A Novel of Terrible Optimism (The Book of the Juke Series 1) Kindle Edition

Nickle sets off the tale with a quietly cautious undertone of unseen terror, gradually grinding in an almost overwhelming feeling of clinging tension to the hidden core of the story. As the plot slowly peels away its layers, with the characterization of our two principal protagonists already masterfully established, the haunting visions of this dark secret begin to emerge with the staggering impact of a charging leviathan.

Where the novel really succeeds above all else is the almost palpable and oppressive atmosphere that lingers over every page; saturating each and every word with its clinging and unrelenting gloominess. The reader quickly becomes swallowed up in this haunting cloud of constant impending doom, which allows Nickle, when the time is right and the reader is truly on edge with the tale, to suddenly delve deep into his twisted imagination, bringing forth monumental visions that haunt, terrify and chill to the bone.

Gratuitous and explicit images of the horror on hand is never overly thrust into the face of the reader, but instead is allowed to become exposed during gut-wrenching snippets of terrifying action, then laid low to smolder in the readers mind until the next exposure to the true horror of the novel is unleashed.

With that said, one particular scene does hail further into the horrific and downright disturbing than the majority of the book purposefully participates in. Here instead, Nickle wreaks havoc with the reader s senses, as he carves out a grotesque and painstakingly descriptive scene detailing the appalling labor and birth of one of the demon-like creatures unto the ravaged form of a young girl.

Eutopia is an elaborate novel, pulling together intricate interwoven subplots, with a dark and eerie mystery constantly behind it all. Mark Morris s forceful but swift visions of the grotesque, mixed with elements of early Clive Barker dark fiction, with the final all-encompassing visionary of Lovecraft knitted in for good measure.

The novel is as chaotic as it is inspired. The levels and layers that form the crux of the plot are ingenious in their creation. The delivery is gripping, enthralling and utterly engaging from the outset to the near-epic finale. Nickle never once backs away from taking on the darker route. Instead he embraces the numerous twists and turns that see the storyline fall deeper and deeper into an abyss of abominable corruption.

David Nickle has reincarnated Lovecraft and spun a new direction for the terror that is to follow. This is certainly not the last we will have heard from this talented new face in horror. --Chris Hall (DLS Reviews) --This text refers to an alternate kindle_edition edition.

3.7 out of 5 stars
3.7 out of 5
22 global ratings
How are ratings calculated?
To calculate the overall star rating and percentage breakdown by star, we don’t use a simple average. Instead, our system considers things like how recent a review is and if the reviewer bought the item on Amazon. It also analyses reviews to verify trustworthiness.

finalguy
3.0 out of 5 stars Weird, different and strange, but with a disconnect.
Reviewed in the United Kingdom on 23 September 2013
Verified Purchase
It has been a long, long time since I have read anything quite this weird. This novel pretty much has it all, there's evil conspiracies, bed sheet wearing ku klux klan members, giant god-like monsters whose hallucinations cause you to worship them, and oh yeah, evil faeries that wanna rip through your vagina. Wait, what?

I like weird books, and I like something to come up with an original concept, and this novel definitely does both of those in spades. The story here concerns the idea of a landowner using his land to create the perfect Eutopia, filled only with people who they deem to be the top 5 percent of population. The story of this Eutopia is told through two different POV's. One from a newcomer to the compound, and the other, the compounds only black resident, and doctor.

The issue of race is brought up pretty frequently throughout the novel, and with the ku klux klan within the compound, the n word is used pretty frequently so that may put off some readers. I wouldn't say it is in a sensationalist way though, just the author trying to represent the time the book takes place, which oh yeah, is 1911.

The monsters in this book are slightly strange, they seem to be described as weird faerie/nymph things which supernatural powers that can lead to anyone coming into contact with them to worship them as gods. It's a different story to what I've read before and even has a few creepy moments before they are fully revealed. If the idea of a scalpel being used to cut open a hymen is too much for you. Don't read this book. Seriously.

Despite liking it, the reason I'm giving this only three stars is that it was a little hard to get through sometimes. I found myself not really wanting to pick it up all that often, and there was a point in the middle where it just seemed to be prolonging the inevitable conclusion a little too much. Overall though, if you like weird books that make you pull a wtf? face, I would give this a go. I guarantee you probably haven't read anything like it before

Harlequin
3.0 out of 5 stars Yeah it's a good enough yarn but lacks depth and a background mythology.
Reviewed in the United Kingdom on 29 May 2015
Verified Purchase
I really enjoyed this book. It wasn't a very deep read and wasn't very convoluted as it seemed to drive at a steady pace. The characters were pretty straight forward and lacked motivation or background in areas. I would have also liked to have had a bit more of the monster's mythology expanded upon. I'm sure the author is trying to say something about religion and society but I missed it. Overall I wouldn't say it was one of the best books I had ever read but it was good enough to enjoy.
Read more
Report abuse

squirly
5.0 out of 5 stars Very enjoyable novel
Reviewed in Canada on 25 February 2014
Verified Purchase
This kept me reading until it was done. Very interesting story and I just love the quality of these books. The cover art is best to none. Very much recommended for anyone.
Read more
One person found this helpful
Report abuse

Brett R McKenzie
3.0 out of 5 stars Surprising direction
Reviewed in Canada on 22 November 2015
Verified Purchase
This was not a bad book. It didn't go the way I expected, which is okay, and inspired me, maybe, to write the book I thought this was going to be. Interesting reading.
Read more
Report abuse

Jacob R S Nishimura
4.0 out of 5 stars Lovecraft+Wild West+Eugenics=Profit!
Reviewed in the United States on 18 April 2015
Verified Purchase
An engaging historical horror story mixing Lovecraft, eugenics, and the Wild West, among other things. I found the ending a little too pat, given the tone of the book leading up to it, but I'll definitely be checking out other works from this author, and have ambivalent desires to see a film adaptation; it could be amazing, or terrible, depending who makes it.
Read more
2 people found this helpful
Report abuse
See all reviews
Back to top
Get to Know Us
Make Money with Us
Let Us Help You
And don't forget:
© 1996-2021, Amazon.com, Inc. or its affiliates