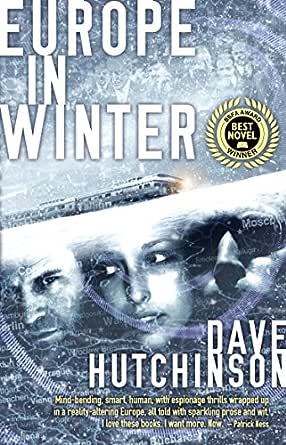 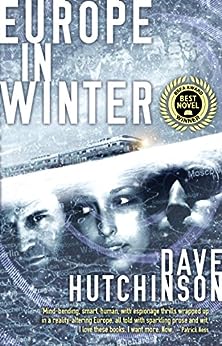 WINNER OF THE 2016 BSFA AWARD FOR BEST NOVEL

A Fractured Europe. A Parallel World. A Global Threat.

Union has come. The Community is now the largest nation in Europe; trains run there from as far afield as London and Prague. It is an era of unprecedented peace and prosperity.

So what is the reason for a huge terrorist outrage? Why do the Community and Europe meet in secret, exchanging hostages? And who are Les Coureurs des Bois?

Along with a motley crew of strays and mafiosi and sleeper agents, Rudi sets out to answer these questions – only to discover that the truth lies both closer to home and farther away than anyone could possibly imagine.

'Hutchinson goes from strength to strength; top notch SF mixed with a tense, gritty story of espionage in the le Carre vein.'
Adrian Tchaikovsky on Europe at Midnight

'Seemingly effortless literary flair.'
The Guardian on Europe at Midnight

'A work of staggering genius.'
Paul Cornell on Europe at Midnight

'Fantastical, readable and remarkable.'
Tor.com on Europe at Midnight

Dave Hutchinson was born in Sheffield in 1960. After reading American Studies at the University of Nottingham, he became a journalist. He's the author of five collections of short stories and two novels, and his novella The Push was shortlisted for the 2010 BSFA award for short fiction. He has also edited two anthologies and co-edited a third. His short story 'The Incredible Exploding Man' featured in the first Solaris Rising anthology, and was selected for the Year's Best Science Fiction collection. He lives in north London with his wife and several cats.

illegiblescribble
TOP 1000 REVIEWER
4.0 out of 5 stars Grim and eerily-prescient echoes of what is actually going on in Europe right now
Reviewed in Australia on 15 June 2017
Format: Kindle Edition
In a modern-day Europe which co-exists with a parallel alternate Europe and trade and travel between the two have become somewhat normalized, a spate of terrorist attacks results in sometime-spy, sometime-chef Rudi being tasked to find out what’s behind it all, before catastrophe turns into cataclysm.

I really enjoyed the first two books in this series (Europe In Autumn and Europe at Midnight), and this one – the 2017 BSFA winner – is a worthy conclusion to the trilogy. This series is a bit dark, with some grim and eerily-prescient echoes of what is actually going on in Europe right now. A willing suspension of disbelief is required for enjoyment, but is well-rewarded here.

David Collier
5.0 out of 5 stars Be prepared to concentrate!
Reviewed in the United Kingdom on 8 February 2019
Format: Kindle EditionVerified Purchase
Its a fantastic piece of (very) grown up imaginative fiction as other commentators have said, and also as previously noted 'densely plotted' with interleaved stories and flashbacks, and horribly relevant to current politics. I read the first two volumes the old fashioned way but listened to this one in the car as an audio book over the course of a few weeks. Wonderful book though it is, I really did struggle to keep track consuming it this way, and found myself wishing there was a crib sheet to remind me who everyone was and how they fitted together. You really do have to concentrate! looking forward now to the fourth instalment.
Read more
One person found this helpful
Helpful
Sending feedback...
Thank you for your feedback.
Sorry, we failed to record your vote. Please try again
Report abuse

benteh
5.0 out of 5 stars Hutchinson's entire Europe-series are wonderful: not quite science fiction
Reviewed in the United Kingdom on 26 December 2016
Verified Purchase
Hutchinson's entire Europe-series are wonderful: not quite science fiction, not quite crime, not quite current realism, but some of all. At the time of writing, we are waiting for the fourth and last in the series, but I do not hesitate to say: buy them. This is the kind of books you can read several times, and each time you notice new details and nuances. Solidly crafted, these books will confuse, delight, mystify, and engage.
Read more
3 people found this helpful
Helpful
Sending feedback...
Thank you for your feedback.
Sorry, we failed to record your vote. Please try again
Report abuse

Norbury
5.0 out of 5 stars Satisfying end to the trilogy
Reviewed in the United Kingdom on 17 January 2017
Format: Kindle EditionVerified Purchase
This is densely plotted and can be confusing as you try to keep track of the strands, but if you can't then that's probably your fault not the author's. I found this a satisfying end to the trilogy, as several plot lines resolved with a sense of some unfinished business at the end being "realistic".
Read more
2 people found this helpful
Helpful
Sending feedback...
Thank you for your feedback.
Sorry, we failed to record your vote. Please try again
Report abuse

Mr. T. O. Womack
3.0 out of 5 stars The sort of unsatisfying end of all real spy stories
Reviewed in the United Kingdom on 25 November 2019
Format: Kindle EditionVerified Purchase
Across a multiverse somehow sadder and less whimsical than in the previous two novels, the consequences of universe-hopping play out in a collision of lives in Warsaw, Estonian islands, and fantastical Siberian arcologies.
Read more
Helpful
Sending feedback...
Thank you for your feedback.
Sorry, we failed to record your vote. Please try again
Report abuse

Maurizio
3.0 out of 5 stars I loved the first book
Reviewed in the United Kingdom on 25 January 2017
Format: Kindle EditionVerified Purchase
I loved the first book, I loved the second book, but this seems to have no story or plot to follow - there is a collection of characters that all have various stories but no common thread. I won't spoil anything but I almost feel like it was made deliberately confusing. It is such a shame as I really love the premise. I will probably buy the fourth book just to see if the whole thing makes sense...
Read more
2 people found this helpful
Helpful
Sending feedback...
Thank you for your feedback.
Sorry, we failed to record your vote. Please try again
Report abuse
Load more international reviews

Mr. David Mason
5.0 out of 5 stars Deeply enjoyed all 3 books
Reviewed in the United Kingdom on 29 December 2016
Format: Kindle EditionVerified Purchase
This trilogy was a surprise. I was not sure what to expect but was delighted with the unfolding. It is very hard to describe, blending a 'realism' of a fragmented Europe of the nearish future with completely believable sci-if alternate but overlapping universes. Highly recommended
Read more
One person found this helpful
Helpful
Sending feedback...
Thank you for your feedback.
Sorry, we failed to record your vote. Please try again
Report abuse

PeteMC
4.0 out of 5 stars Clever speculative spy thriller
Reviewed in the United Kingdom on 14 December 2016
Verified Purchase
A very clever speculative spy thriller set in a near-future Europe where all is definitely not what it seems. Rudi from Europe in Autumn makes a welcome return too, and things are left very nicely leading into the fourth book. Excellent stuff.
Read more
One person found this helpful
Helpful
Sending feedback...
Thank you for your feedback.
Sorry, we failed to record your vote. Please try again
Report abuse

John Brandon
5.0 out of 5 stars Well done
Reviewed in the United Kingdom on 6 November 2016
Format: Kindle EditionVerified Purchase
Really enjoyed the first two, and read this one in one go, great fun and mostly excellent a bit patchy in parts and a bit roo knowing deus ex machina indeed.
Read it, the final chapter is worth the price on its own.

R.H.
5.0 out of 5 stars A fantastic conclusion to a brilliant series.
Reviewed in the United Kingdom on 16 March 2017
Format: Kindle EditionVerified Purchase
I cannot rate the fractured Europe series highly enough. The most fantastic twists and turns all tied up in breathtaking story telling. Great characters you grow quickly to care about, a tour de force of 'world building'(!), and a gripping narrative that never fails to leave you wanting more.
Read more
Helpful
Sending feedback...
Thank you for your feedback.
Sorry, we failed to record your vote. Please try again
Report abuse

Seymourh
4.0 out of 5 stars Good series finisher
Reviewed in the United Kingdom on 14 July 2017
Format: Kindle EditionVerified Purchase
Good finish to this series. Based on an original idea, the whole series was a good read, but I did not feel as drawn in to the characters in this book as in the previous two. Of course you have to read this if you have read the others!
Read more
Helpful
Sending feedback...
Thank you for your feedback.
Sorry, we failed to record your vote. Please try again
Report abuse

alcyst
5.0 out of 5 stars Great fun, pity it came to a conclusion. A bit english
Reviewed in the United Kingdom on 7 May 2017
Format: Kindle EditionVerified Purchase
Enjoyed reading it. Pity it had to conclude. The only flaw? There is a bit of intellectual Daily Mail to it; England is damaged perfection, and "europe" is a complicated mess.
Read more
Helpful
Sending feedback...
Thank you for your feedback.
Sorry, we failed to record your vote. Please try again
Report abuse

marsha l. reid
3.0 out of 5 stars A disappointing final instalment
Reviewed in Canada on 5 December 2016
Format: Kindle EditionVerified Purchase
I was a bit disappointed in this final instalment of the Europe at Midnight Series. The Community has revealed itself to Europe and limited travel between the two universes is allowed. Negotiations with the Community and the various countries of Europe are entered into. The demand for Rudi's services has fallen off but he is still persistent in trying to figure out what this all means. Hutchinson tries to resolve the plot threads and ideas of the last two books but doesn't successfully do it in my opinion. It also jumps around alot and it gets confusing trying to keep track of everything. Nevertheless it is one of most original and fascinating sci/fi series I've read in a while.
Read more
Helpful
Sending feedback...
Thank you for your feedback.
Sorry, we failed to record your vote. Please try again
Report abuse