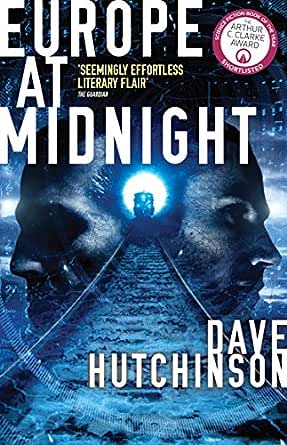 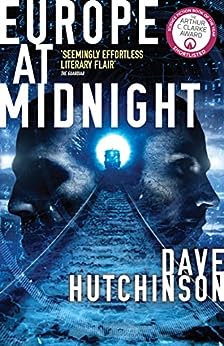 In a fractured Europe, new nations are springing up everywhere, some literally overnight.

For an intelligence officer like Jim, it’s a nightmare. Every week or so a friendly power spawns a new and unknown national entity which may or may not be friendly to England’s interests. It’s hard to keep on top of it all. But things are about to get worse for Jim.

A stabbing on a London bus pitches him into a world where his intelligence service is preparing for war with another universe, and a man has come who may hold the key to unlocking Europe’s most jealously-guarded secret...

Dave Hutchinson was born in Sheffield in 1960. After reading American Studies at the University of Nottingham, he became a journalist. He's the author of five collections of short stories and two novels, and his novella The Push was shortlisted for the 2010 BSFA award for short fiction. He has also edited two anthologies and co-edited a third. His short story 'The Incredible Exploding Man' featured in the first Solaris Rising anthology, and was selected for the Year's Best Science Fiction collection. He lives in north London with his wife and several cats.

Peter Eerden
TOP 500 REVIEWER
4.0 out of 5 stars Book two was promised to deliver and did!
Reviewed in Australia on 31 May 2018
Format: Kindle EditionVerified Purchase
The community has well and truly risen and is suddenly the issue rather than the solution to a world almost brought to its knees. There are still a few mysteries to get through so I must cut this review short to get to book three. Four stars was due to a bit of circuitous writing that kept me losing track if I put down my iPad. Solved that by binge reading to the end.
Read more
Helpful
Comment Report abuse

Brett
3.0 out of 5 stars Confused
Reviewed in Australia on 27 November 2019
Format: Kindle EditionVerified Purchase
I liked the book and the writing style. Interesting ideas and characters. But I just couldn't follow the plot! Maybe you can.
Read more
Helpful
Comment Report abuse

joe Jacobs
5.0 out of 5 stars Brilliant Sequel.
Reviewed in the United Kingdom on 9 February 2016
Format: Kindle EditionVerified Purchase
An absolutely brilliant sequel to Europe In Autumn; although, be prepared - the narrative starts from a very different location, and takes the whole novel to converge; possibly the two strands will now move forward together in another volume; or possibly not. I suppose the clue is in the series title : 'Fractured Europe'; and so is the plot. I won't go in to the intriguing premise of a recognisable future Europe, but one which has disintegrated into hundreds of regional and city states (even the trans-continental railway system is self-governing), necessitating an enormous expansion of intelligence communities, both governmental and non-governmental; other reviewers have described this. My interest was held by the author's focus on his characters caught up in this labyrinth of politics and intrigue, and how they manage to survive, adapt or become players themselves. (Someone mentioned Asimov's Foundation Trilogy). And by the way, the fractures in Europe are not just horizontal. Reminiscent of a Borges fable, there is also another continent hidden in the topology of the familiar, one of which only the cognoscenti are aware - so perhaps this is SF?
Read more
7 people found this helpful
Helpful
Sending feedback...
Thank you for your feedback.
Sorry, we failed to record your vote. Please try again
Report abuse

Imyril
4.0 out of 5 stars Fascinating fractured world
Reviewed in the United Kingdom on 28 January 2017
Format: Kindle EditionVerified Purchase
Europe at Midnight is less a sequel to Europe in Autumn than a companion novel: the action takes place along the same timeframe, with occasional cross-over characters pointing up where we are. If I thought I'd got a handle on where these books were going at the end of the first one, I rapidly realised reading Midnight that I hadn't begun to grasp the scale of Dave Hutchinson's ambition. Thankfully, he's a good enough storyteller to pull it off - this is an absorbing and unexpectedly intimate read exploring the hard yard of espionage, with parallel universes just one more way to give a spy a hard time. Expect acerbic commentary on our times with a charming thriller wrapped around it.
Read more
2 people found this helpful
Helpful
Sending feedback...
Thank you for your feedback.
Sorry, we failed to record your vote. Please try again
Report abuse

tylmart8
5.0 out of 5 stars I look forward to the fourth installment of this spectacularly good trilogy.
Reviewed in the United Kingdom on 19 April 2017
Format: Kindle EditionVerified Purchase
This Europe is our Europe, but different, instantly recognisable yet headscratchingly askew, the differences fascinating and a bright light on the fractures in the way we live now. Which is one of the reasons why grown-ups go on reading SF/F long after the bright lights and explosions and simplistic affirmations of the imperial way have lost their lustre. The prose is not as pyrotechnical as - say - Banks or Meiville, the characters not so gaudy - but the pages go on turning themselves as the story draws you deeper into its mysteries. This is internal SF in the tradition of Aldiss and Ballard, Dick and LeGuin. I look forward to the fourth installment of this spectacularly good trilogy.
Read more
2 people found this helpful
Helpful
Sending feedback...
Thank you for your feedback.
Sorry, we failed to record your vote. Please try again
Report abuse

Gustaf Eriksson
5.0 out of 5 stars Very highy recommended!
Reviewed in the United Kingdom on 17 August 2017
Format: Kindle EditionVerified Purchase
Loved it! It started off in a way that made me think "hey, what's this all about", but soon captured my interest. It is a low key (to begin with) but intense journey through a wildly different Europe in the future, with the chief character working as a cook (!) originally. It is a cross between spy story and Sci-fi, and is part of a trilogy. Europe is divided into lots of small sovereign entities, sort of old time countries, but through the continent weaves is a web of dark, huge, sinister forces, that control many things... add a separate dimension of old English countryside that exist parallell to the everyday world and you will be sucked into reading every part of the trilogy! The fact that a lot of the action happens in Eastern Europe makes it even more interesting.
Read more
Helpful
Sending feedback...
Thank you for your feedback.
Sorry, we failed to record your vote. Please try again
Report abuse
Load more international reviews

PhotonQyv
5.0 out of 5 stars Another romp across a fractured Europe both familiar and not so...
Reviewed in the United Kingdom on 8 March 2016
Format: Kindle EditionVerified Purchase
I, originally, was sent an advance copy by the author, read it immediately but decided to hold off on the review. So here finally, is my review for what it's worth (;*

Another great read from one of my favourite authors, the tale begun in Europe in Autumn continues and is expanded upon, much to my delight. There's even a pocket universe thrown in for good measure in the form of an extensive university campus; those Whitton-Whytes have been rather busy.

A host of new characters continue this thrilling ride through both a familiar and unfamiliar Europe as one man attempts to discover just how 'deep the rabbit hole goes'. We hear more of the Coureurs, and learn a little more of the organisation that has inherited the Whitton-Whytes' creation.

If you're looking for more on Rudi's story, it looks like you might have to wait, though he does make a cameo appearance towards the end of the novel.

All in all, a fun read, with thrills, intrigue that'll keep you wanting more.

benteh
5.0 out of 5 stars Hutchinson's entire Europe-series are wonderful: not quite science fiction
Reviewed in the United Kingdom on 26 December 2016
Verified Purchase
Hutchinson's entire Europe-series are wonderful: not quite science fiction, not quite crime, not quite current realism, but some of all. At the time of writing, we are waiting for the fourth and last in the series, but I do not hesitate to say: buy them. This is the kind of books you can read several times, and each time you notice new details and nuances. Solidly crafted, these books will confuse, delight, mystify, and engage.
Read more
Helpful
Sending feedback...
Thank you for your feedback.
Sorry, we failed to record your vote. Please try again
Report abuse

RGW
3.0 out of 5 stars Not sure what happened for me
Reviewed in the United Kingdom on 31 May 2019
Format: Kindle EditionVerified Purchase
I enjoyed Europe in Autumn. It was unique and fascinating. This one didn't work as well for me. Perhaps because I read before going to sleep and so maybe I didn't concentrate as hard as necessary. The story seemed very complicated and hard to follow.
Read more
Helpful
Sending feedback...
Thank you for your feedback.
Sorry, we failed to record your vote. Please try again
Report abuse

Victor
5.0 out of 5 stars really good story and good writing of course
Reviewed in the United Kingdom on 2 June 2018
Verified Purchase
Reading it at the moment, didn't eve know there was a book in the series before this one.
It's been a while since I found a book that pulls me toward it as this one does, really good story and good writing of course.
Read more
Helpful
Sending feedback...
Thank you for your feedback.
Sorry, we failed to record your vote. Please try again
Report abuse

Lioc
5.0 out of 5 stars Powerful follow up to Europe in Autumn
Reviewed in the United Kingdom on 11 June 2016
Format: Kindle EditionVerified Purchase
Equally powerful follow up to Europe in Autumn. Introspective, reflective, thought provoking, it's not going to be for everyone, but for me these were two delightful books that look forward in unusual ways while projecting an air of nostalgia and remembrance for ages past.

I'll be buying the next the second it's available
Read more
Helpful
Sending feedback...
Thank you for your feedback.
Sorry, we failed to record your vote. Please try again
Report abuse
Load more international reviews

Czechboy
5.0 out of 5 stars Oddest, but very good, book I've read for some time.
Reviewed in the United Kingdom on 11 October 2016
Format: Kindle EditionVerified Purchase
This follow on is so far removed from the first part in its style as to make it even more of a pleasure for me. Very clever, page turner, neither sci fi nor fantasy but will be interesting for those who like those genres.
As you can see, hard to describe but easy to read.
Read more
Helpful
Sending feedback...
Thank you for your feedback.
Sorry, we failed to record your vote. Please try again
Report abuse

Peter
4.0 out of 5 stars Parallel Universe
Reviewed in the United Kingdom on 31 August 2016
Format: Kindle EditionVerified Purchase
Though not as surreal as the one we are in at the moment. Interesting,plot but sometimes wanders around with the introduction of random characters. Good entertaining read though
Read more
Helpful
Sending feedback...
Thank you for your feedback.
Sorry, we failed to record your vote. Please try again
Report abuse