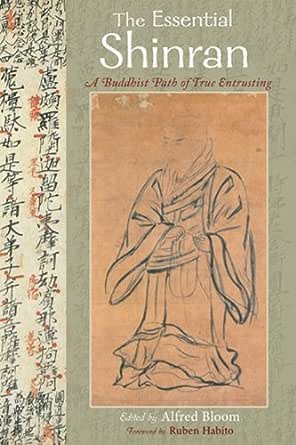 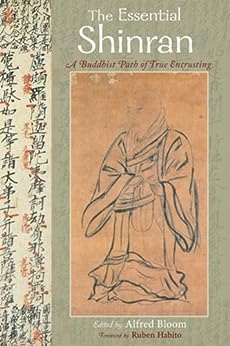 Guidance from the former dean of the Institute of Buddhist Studies in Berkeley, CA.--Library Journal --This text refers to the paperback edition.

Alfred Bloom, former professor at the University of Hawaii and Dean of the Institute of Buddhist Studies in Berkeley, California, is the author of Shinran's Gospel of Pure Grace and editor of Living in Amida's Universal Vow. He lives in Kailua, HI. --This text refers to the paperback edition.

Andrew W
2.0 out of 5 stars Disappointing on Kindle
Reviewed in the United Kingdom on 25 May 2020
Verified Purchase
The paper book I will rate four stars for its content as it's an excellent anthology of the teachings of Shinran Shonin. Unfortunately the Kindle edition, although great value, is poorly formatted which greatly detracts from it.
Read more
Report abuse

Eamonn Jenkins
4.0 out of 5 stars Good book; essential for Shinran fans
Reviewed in Canada on 26 January 2014
Verified Purchase
Great introductory book about Shinran. Occasionally hard to follow the method of organizing the chapters and sources. If you like Shinran I'd also recommend the book Honen the Buddhist Saint, for which Bloom writes an excellent introduction. That book divides itself in a clearer fashion.
Read more
Report abuse

Quinby
5.0 out of 5 stars For an introduction, this book is essential.
Reviewed in the United States on 28 October 2015
Verified Purchase
The Essential Shinran-Ed. Alfred Bloom review

This was an extremely helpful book in understanding Shinran and New Pureland Buddhism (or at least the foundations). Bloom does an excellent job in categorizing and organizing Shinran's work in a way that is helpful and allows one to grasp more fully what the beliefs of Shinran were. Also, the comments by Bloom were very helpful in understanding what to watch out for, what to pay attention to and things to notice that, as someone who hasn't studied Shinran at great depth, I would not have noticed on my own. I think that there might be some who would complain that the organization defeats how the texts of Shinran ought to be read or that Shinran would not want to tie up things so neatly, but for me, it was a very nice place to start. I think this book is a good first step in exploring Pure Land Buddhism thought, because often times when we enter into a vastly different worldview, we get lost and we don't quite know what the significance of some sayings are or what one means by this or that term. But, this book gave a kind of nice walking path and allows the reader to pick up a lot of the essential elements of Shinran and have enough grasp on them to be able to give some kind of answer to "what is the belief of Shinran".

I came at this book from a Christian perspective and I naturally looked for comparisons and differences between Pure Land Buddhism and Christianity. There were some new discoveries, such as concepts of Mappo (that the current state of the world is as such that a person can no longer achieve enlightenment) that were somewhat parallel to certain Christian beliefs, but there were also quite a few differences as well (such as the universalistic nature of Pure Land…as everyone will eventually go to the purland, even if they start by being born again on the very borders of it).

For me, how Shinran interacts with Japanese religions was also interesting to see (considering Shinran is more universal than the more Japan centered Japanese religion (sorry, a bit redundant!) ( and "universal" here meaning, not particular only to a certain nation or people). I'll include a quote which really peaked my interest, but also to give a clear example of how the book flows (quote and then explanation).

"Note: This passage has been very controversial in modern Shin Buddhism. Some have argued that it was directed to monks whose life transcended the secular world. Huiyuan (334-416 C.E.), a famous monk in ancient China, had written a treatise that "monks do not Bow before Kings." They serve a higher principle, being engaged in gaining Enlightenment. Therefore the Order is independent of the secular realm.
However, Shinran quoted this text apparently in the context of the Shin community, perhaps transferring the admonition in the passage to his community, not to involve themselves in the political conflict that disturbed the society of that time or to rely on secular power to promote the teaching. The passage also indicates that the Buddhist religious life transcends the ancestor cult, as well as the worship of spirits." –Bloom, 195

And, as a Christian who does believe in Christ in the exclusive sense, it can sometimes be edifying to know that many important thinkers in the past were also "exclusive". If they were not, then they would not have started new movements and sought after truth in new ways as opposed to just being okay with the way things were. Because they believed in a right way, they necessarily thought there were wrong ways too (people like Nichiren make that really clear). And so, calling other people to exclusively follow and worship Christ (in Japan for me) is of course offensive in some ways, but is not so alien as one might think when we just look in the past a bit.

Amazon Customer
5.0 out of 5 stars A Pure Land goldmine
Reviewed in the United States on 12 March 2020
Verified Purchase
Great for beginner or someone who's been practicing a long time.
Read more
One person found this helpful
Report abuse

Bloom states what he has accomplished in this book in the following.

"In order to help students and scholars find their way through [The Collected Works of Shinran, translated into the English in the 1980s], this volume offers a comprehensive outline of Shinran's most important ideas and issues which are scattered through the Collected Works." (xvii)

That is, Bloom condenses the 1000+ page Collected Works into a very digestible 200 pages, organizing it thematically so the interested reader can browse by topic. Even better is that Bloom lets Shinran speak for himself (albeit through translation), providing the passages. I strongly prefer reading it from the original than getting someone's second-hand reiteration. On one hand, this may be a glorified cut-and-paste job, but it also makes studying Shinran and digesting the Collected Works extremely easy. The usefulness of this publication for readers from any background I find to be self-evident.

My second remark is a critique of Bloom's evangelical bias. The introduction and short biography of Shinran that starts the book is laden with thick, sectarian bias. I am having trouble rectifying Bloom's status as University of Hawai'i Manoa professor with what is written here as it is clearly his capacity as a Shin Buddhist priest that has influenced his writing.

For the sake of brevity, I will only present one sentence that demonstrates this bias.

"Eventually, the conversion of two women in the court to his teaching, through their relation with some of his disciples, led to their execution and the prohibition and abolition of the movement by exiling leading members, including Shinran." (3)

He precedes this statement with a casual reference to how Honen "undercut the traditional Buddhist establishment" and "undermined the folk religious traditions", but this is marginalized by the cited passage. The passage deliberately omits the point that "some of [Honen's] disciples" were spending the night in the chambers of these female converts, which Bloom attempts to summarize with the term "relation." The sentence is also constructed in such a way that the execution in question seems to follow either the conversion of these women or these "relations." The first, "the conversion of two women... led to their execution", strikes me as an evangelical work of historical fiction suggesting un-due persecution and the second, "their relation with his disciples... led to their execution" grossly understates the accusation of using nembutsu practice as a cover up for sexual liaison.

This portion of Shin Buddhist history, if rendered honestly, is very important as it articulates just how abruptly Honen cut against the grain of Kamakura Buddhist culture. It's a shame Bloom didn't follow that path.

There are numerous examples of evangelizing in this book, the above being the most egregious. Other examples are more subtle, having to do more so with issues of tone, such as "The Collected Works of Shinran is an ...endeavor to offer Shin Buddhism to the world." (xvi) It is not "making it available to an English speaking audience", but rather "offering it to the world". I hope my point is clear here.

If anything, these biases make for an interesting case study of what happens when religious devotion obscures objective scholarship. This aside, the book is still a fantastic introduction to the Collected Works of Shinran, just so long as the reader remains aware of the author's devotion to the subject.
Read more
10 people found this helpful
Report abuse
See all reviews
Back to top
Get to Know Us
Make Money with Us
Let Us Help You
And don't forget:
© 1996-2021, Amazon.com, Inc. or its affiliates