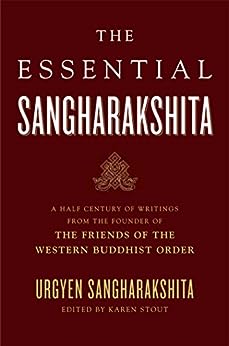 The Essential Sangharakshita: A Half-Century of Writings from the Founder of the Friends of the Western Buddhist Order Kindle Edition

"His contribution to the transmission of the Dharma form East to West has been immense."--Professor Damien Keown, University of London.

"I have always looked to Sangharakshita's books for inspiration and ideas on how to better translate the principles and practices of Buddhism for Western audiences and practitioners today."--Lama Surya Das, author of Awakening the Buddha Within

"When Sangharakshita returned to the West in 1964 he was equipped with a grasp of and direct experience of Buddhist teaching and practice that was unparalleled in his time, indeed, in the breadth and scope it very probably remains unique."--Nagabodhi, founding chairman of Windhorse Publications --This text refers to an alternate kindle_edition edition.

Karen Stout (Vidyadevi) has worked with Sangharakshita as an editor since 1987, as well as editing many other books for Windhorse Publications, UK. She became a member of the Western Buddhist Order in 1993 and was given the ordination name Vidyadevi. The Sanskrit translates as "shining one or goddess of intuitive wisdom and aesthetic appreciation"-an aspiration, not a description, she hastens to add!-but an appropriate one because of her interest in the affinities between Buddhism and Western culture. She has traveled widely and feels special connections with Aryaloka Buddhist Center in New Hampshire and the Buddhist movement in India, both of which continue to be the source of joy and inspiration. She lives with her partner in rural Herefordshire, UK, close to the border between England and Wales. --This text refers to an alternate kindle_edition edition.

Ambient Arts Ltd
5.0 out of 5 stars Clarity and Beautiful Wisdom.
Reviewed in the United Kingdom on 27 May 2014
Verified Purchase
I have read a lot of books about buddhism, about meditation, from all schools. I find Sangharakshita's teachings from these schools wonderfully clear, and his work deserves more recognition and respect. After spending decades in India, receiving ordinations and teachings from masters from Tibetan, Chinese, Zen and Theravada schools, he distilled the essence of the dharma into a form for the West. With this work, he has inspired and blessed the lives of thousands of sincere dharma practitioners, many themselves now teachers. He never claimed to be perfectly enlightened, in fact openly admits that he didn't think he was suited to start a movement, but the movement he did start is actually doing some wonderful work in disseminating dharma globally. For me, it isn't so important that a teacher in a religion has failings, but the ideas and teachings are crucial.
I am not a member of his movement, but admire it, and can see that without it countless beings would never have been drawn to meditation or the dharma. My contact with the meditation centres in the UK run by this group have been highly positive and have deeply helped me and inspired me.

This book is the fruit of a scholastic and yet very creative and imaginative mind, dare I say a great mind, having spent seventy odd years studying and teaching the dharma. He is not the only one, but his voice is clear and loud, and I for one am incredibly appreciative and grateful for his work. This is the kind of work which saves lives, which can lead to the raising of consciousness so vital and needed in our modern world, so crucial for our survival. May all blessings be his.
Read more
7 people found this helpful
Report abuse

Daiho
5.0 out of 5 stars Inspiring selection from one of the West's first non-sectarian Dharma teachers
Reviewed in the United States on 8 June 2010
Verified Purchase
Among the Westerners who went East and brought the Dharma home, one of the more prolific writers and lecturers was Englishman Sangharakshita (formerly Dennis Lingwood). Stationed to India during WWII, he stayed on 14 years to study Buddhism, reputedly taking ordination as a Theravadan monk, but studying as well with teachers from Chan and Vajrayan traditions before retuning to the UK in the mid-1960's to found the Friends of the Western Buddhist Order. Questions about the authenticity of his ordination, as well as the reason for his leaving India, surfaced following scandals of sexual impropriety and mismanagement in the 1990's.

None of these indiscretions or suspicions is even hinted at in the anonymous biographical sketch opening The Essential Sangharakshita, 700 pages of extracts from 38 of the teacher's many books and transcribed lectures. You might expect such a weighty career to outweigh a few improprieties. Not addressing them, or allowing them to be addressed, suggests continuing sensitivity to reputation.

And that's something of a shame, because this volume demonstrates that while he may not have always lived up to the teachings, Sangharakshita was witty, clever, and sensitive to his time and audience, able to explain the Dharma in ways relevant to the West.

He was also something of an anomaly among the many teachers who emphasized the rational, conceptual side of Buddhism. Sangharakshita was unashamedly a religionist and romantic, a teacher who placed great value in the emotional and the aesthetic. He loved ceremony, candles, incense, and chanting, and saw a place for them within Western Buddhism. He recognized the need to worship something greater, to devote oneself to something higher, of the need to engage emotionally with symbols. He was also eclectic, promoting a non-sectarian form of Buddhism that drew on many strands of thought and practice. He quoted liberally from Western philosophy and religion, English literature and contemporary psychology, and spoke on occasion of his efforts at poetry, samples of which are included in this collection.

With more than 20 years experience as Sangharakshita's personal editor, Karen Stout was in the unique position of being intimately familiar with much of the author's work and seems to have done a fine job of selecting and compiling. My only quibble is the omission of one of Sangharakshita's more widely read pieces, a lengthy review of a seminal work of Western Buddhism, Stephen Batchelor's " Buddhism Without Beliefs ," as well as the omission of any writings about  Ambedkar  or  Navayana Buddhism .

Essential Sangharakshita features an editor's preface, notes, a list of the works from which extracts have been taken, and an index. The excerpts are organized into 5 groups (page count for each group in parenthesis):

1 The Essentials (132): life of the Buddha, going for refuge, the eightfold path
2 Buddhism and the Mind (106): rational and emotional approaches, the self, karma, evolution
3 Art, Beauty and Myth (104): aesthetics in spiritual life
4 Buddhism and the Heart (154): psychology, meditation, devotion
5 Buddhism and the World (160): ethics, work, social engagement

I had listened to several of Sangharakshita's lectures before ordering this book (his eight-part series on the Eightfold Path is worth repeated listenings and is available online at dharmachakra dot com). In the interval before its arrival, I stumbled onto the FWBO Files, a collection of documents outlining improprieties within the Friends of the Western Buddhist Order. I felt somewhat sorry for having ordered it, but decided once I had it to give it a go.

With most of the selections being 3-5 pages in length, I found it a perfect book for daily reading. I'm glad now that I gave it a chance and plan to keep it in my collection, something I can dip into now and then for short readings on subjects of interest. Among the many quotable passages now marked in my copy is this:

"Someone came to me once and said that he did not feel that he could be very useful because he had no particular talent. I told him, "Think of yourself as an unspecialized human being." People think that if they can't make themselves useful in some way - they can't type, they can't keep accounts, they can't cook, they can't write or give a talk or paint or play a musical instrument - there's something wrong with them. But consider: this apparently useless human being is the product of millions upon millions of years of evolution. You are the goal; you are what it has all been for. You don't have to justify your existence by being useful. You yourself are the justification for your existence." p303
Read more
9 people found this helpful
Report abuse
See all reviews
Back to top
Get to Know Us
Make Money with Us
Let Us Help You
And don't forget:
© 1996-2021, Amazon.com, Inc. or its affiliates