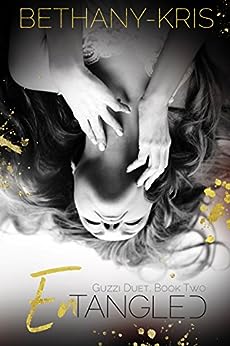 4.3 out of 5 stars
4.3 out of 5
33 global ratings
How are ratings calculated?
To calculate the overall star rating and percentage breakdown by star, we don’t use a simple average. Instead, our system considers things like how recent a review is and if the reviewer bought the item on Amazon. It also analyses reviews to verify trustworthiness.

Ryella
TOP 500 REVIEWER
2.0 out of 5 stars 2.5 stars
Reviewed in Australia on 21 November 2018
This didn't seem like any Bethany-Kris book I've read before. I can say the only thing I really loved about this duet was the epilogue in this one. That's pretty much it. Otherwise I felt that Cara was such a pushover and somewhat delusional to allow herself to be treated the way Gian treated her. Yes okay his marriage was one of only convenience, but Cara was never going to be a priority for him and his actions more than show that. Despite the circumstances of the marriage, Elena would always essentially come first while Cara was someone he got to pass the time with when he had the time to do so. She had a brother willing to help her but instead she chooses to continue to be his mistress with their child being illegitimate (knowing that's a big deal in this world) and pretending that's all okay. While I thought Gian loved Cara, it certainly wasn't enough to make her his everything and circumstances are the only reason why they are finally married and together. Definitely not the kind of romance I enjoy. If anything, this made me sad that Cara had such little self esteem to put up with all of that, and that Gian would never step up for her.
Read more
Helpful
Report abuse

Angie
5.0 out of 5 stars "Duty first, Legacy and only then love"
Reviewed in Australia on 14 August 2017
Bethany Kris has delivering a heartfelt smashing criminal romance, once again!

Entangled is the second part of the Guzzi duet.

"Duty first, Legacy and only then love"

Gian Guzzi and Cara Rossi bend all rules and find themselves in a particular sensitive situation. Gian is a taken married man but for him it's only on paper. Gian's life was in a state of boredom and loneliness, before Cara walked into his life with her strong personality and innocence, she's truly a force to be reckoned with, whereas Gian's branded with a high dose of personality and dominance that if you ever disrespect his woman you better learn to run and hide before he get's to you.

We're taken on a journey of the criminal boss facing life problems with his family members, wife and the love of his life known as the dirty little goomah! To Cara, family is everything, marriage is believed to be forever and being renowned as his mistress makes can only knock her down and make her feel she's not worthy to be anything more. The secrets and lies set by Gian only shatter her time after time, it's either she fights to be by his side to win the war or walk away for good.

Marcella Nielsen
5.0 out of 5 stars 5 stars
Reviewed in Australia on 7 August 2017
Wow. You can always rely on Bethany Kris to create such mayhem and drama and then end it all off perfectly!! I wasn't sure how the dilemma our protagonists Gian and Cara were in, would work out in their favour...BUT IT DID. The twists and turns, the betrayals and tension, this duet series was one of high stakes, secrets, and the only people Gian and Cara could trust were each other.
Gian is a complete heart throb. He broke my heart in the last book and made up for it tenfold in this book.
Overall an amazing series!

Oh and am I looking forward to books on the next Guzzi generation!!!
Read more
Helpful
Report abuse

“Duty first. Legacy second. And only then, love.”

Entangled starts where Unraveled finished and Bethany-Kris was not finished with toying with our emotions. These mafia characters had already embedded themselves into my heart and head and they only burrowed themselves deeper in Entangled. Gian and Cara found themselves in an untenable situation and it seems things are going to get a lot worse before they get better. Gian is a man on his own, an arranged marriage he never wanted and one that was over the day it begun. A woman he loves with his whole being no longer wanted him, a mafia family that was on the cusp of war…he had never felt more alone.

“His soul was entangled with a woman who no longer wanted him, even if he would still die for her. Gian had no one to blame for that but himself.”

Gian was tied to Cara in every possible way, heart, mind, body and soul and through omission he lost it all. Gian cannot let go and even though they may be apart, Gian still knows everything she does, he may not be able to be with her, but that doesn’t mean he has to cut her off completely, he can’t.

“You broke my heart, Gian.”

“Well, I hope mine is a suitable replacement, Cara. Because you still have mine, and you didn’t bother to give it back.”

The love between these two was palpable, their chemistry seriously off the charts and the intensity between them caught hold of every single synapses. I wanted these two to make it, if any two deserved it they did. These two made each other stronger, supported one and other, complemented each other, they just needed for it to be their time.

Entangled is a story chock full of suspense, legacy, drama and betrayal, but most importantly a love so strong that even old-fashioned opinions couldn’t prevent it from happening. Sticks and stones and all that, but at the end of the day this is the twenty-first century, divorce happens on a daily basis and how a mafia family that has evolved from the dark ages still has some moral compass with regards to marriage beggars belief, but alas, it is true. As I said…UNTENABLE.

Bethany-Kris writes some the best mafia romances I have read, I adore her writing style, her characters never fail to infiltrate, her stories are intoxicating and compelling and this duet is one of my favourites. From the very start I have been held hostage by these characters, Gian is one of my favourite characters to ever grace a mafia book and if you love mafia as much as I do, then this duet is a definite must read. I cannot wait to see what comes next from this author.

“A gift I didn’t think I was going to be able to give you.”
Read more
Report abuse

Velvet
5.0 out of 5 stars Five stars!!!
Reviewed in the United States on 21 July 2018
Verified Purchase
"I'll burn the whole f-ing world down for her. Imagine what I would do to just one man"

Daaamn!!! What a way to end Gian and Cara's story. This book had it all. Words just don't do this book justice. None that I can think of anyway.

Gian just cant let Cara go. He is bound to her by some force greater than him. She is HIS and he will stop at nothing to get her back. He practically died on the inside without her. He has never felt more alone and dead inside.

"She was the blood in his body, the breath in his lungs and the sun in his life"

She was his everything. They had a hard road but one worth traveling in the end. Entangled in one another. This book was f-ing good as true to Bethany's form. She is more than a one click for me. She is a definite pre-order author where I am concerned. I loved Gian and Cara's story!!! It was just damn good. Period. Bethany girl you are f-ing amazing!!! And a phenomenal author!!!
Read more
Report abuse

sandy
5.0 out of 5 stars Great ending!!!
Reviewed in the United States on 25 September 2017
Verified Purchase
Second part to the Guzzi Duet books and what an ending and absolutely love it when any author includes future look at what happens to the leading characters. The continuation of Gian Guzzi and Cara Rossi with so much drama and so many events occurring. Gian has so much happening with in the famiglia and needs to find not only the "rat" but contend with his father in law and the actions he is causing to the famiglia.
As well Cara has been put into danger in so many ways. This was such a great read with so much happening that I could not seem to put the book down until completion. Bethany does crime family so well. Even with the position that his wife has put him into with the family Gian never waivers from his obsession and protection of Cara and his deep abiding love. Cara is such a strong woman with everything that happens to her and with the way she is treated because of her role in Gian's life by so many. I love the way Gian and Cara are so entangled.
Read more
One person found this helpful
Report abuse