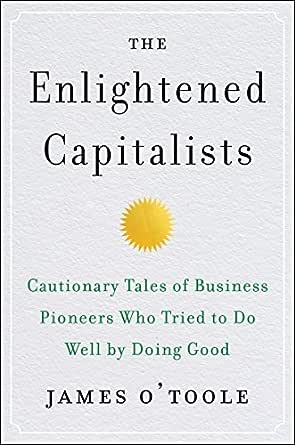 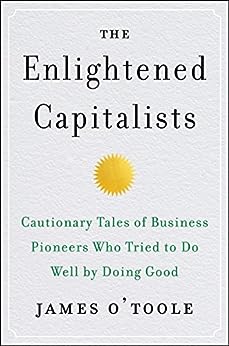 The Enlightened Capitalists: Cautionary Tales of Business Pioneers Who Tried to Do Well by Doing Good Kindle Edition

In The Enlightened Capitalists, James O'Toole tells the largely forgotten stories of men and women who adopted forward-thinking business practices designed to serve the needs of their employees, customers, communities, and the natural environment. Rejecting philanthropy as ineffective, these innovators wanted to prove that executives didn't have to make trade-offs for profit and virtue.

Combining a wealth of research and vivid storytelling, O'Toole brings to life historical figures like William Lever, the inventor of bar soap, who created the most profitable company in Britain and used his money to greatly improve the lives of his workers and their families. Eventually, he lost control of the company to creditors and successor managers who subsequently terminated the enlightened practices he had initiated--the fate of most idealistic capitalists.

Today, corporate leaders in Britain and America are attempting to respond to increasing pressures to address urgent social and environmental issues. But will they--can they--succeed where others failed? By examining the tangled histories of the Enlightened Capitalists, O'Toole explores a major question being posed today in the UK and US: Are virtuous corporate practices compatible with shareholder capitalism? --This text refers to the hardcover edition.

A meticulous and captivating study of business leaders throughout history...This comprehensive and thoughtful study of the often troubled relationship between business and benevolence will provide readers unexpected food for thought.

A tapestry of remarkable characters, high drama, and entertaining story arcs for leaders of businesses large and small.

-- "Kirkus Reviews" --This text refers to the audioCD edition.

James O'Toole is the author of seventeen books, including Work in America and Vanguard Management. Professor Emeritus at the University of Southern California's Marshall School of Business, and Founding Director of the Neely Center for Ethical Leadership. While at USC, he held the University Associates' Chair of Management, served as Executive Director of the Leadership Institute, and editor of New Management magazine.

David Marantz is a voice talent and Earphones Award-winning narrator.

Golden Rule
1.0 out of 5 stars Beware missing page 345
Reviewed in the United Kingdom on 8 September 2020
Verified Purchase
Suggest you check on receipt of book. I was out of time for returning the book when I got to page 345
Read more
Report abuse

Fiona Harper
1.0 out of 5 stars missing pages and faded print
Reviewed in the United Kingdom on 22 August 2019
Verified Purchase
This new book arrived with missing pages and print so faded it could not be read
Read more
Report abuse

T R DOONGAJI
1.0 out of 5 stars Verr very poor as there seems to be no quality check before dispatch at your end.
Reviewed in India on 18 September 2019
Verified Purchase
Very disappointing. Had to return the book as the copy had a few pages from which the text was missing. I would still like to have a copy if sent after a thorough check at your end.
Read more
One person found this helpful
Report abuse

DVogel
5.0 out of 5 stars original and fascinating history of corporate virtue
Reviewed in the United States on 28 February 2019
Verified Purchase
"O'Toole's new book makes an important contribution to helping us understand the potential and constraints of enlightened capitalism. What distinguishes this well-written book is its focus on the historical record. O'Toole asks: what has actually happened to those companies that were founded or managed by enlightened business leaders? Most were financially successful. However, virtually none of their enlightened business practices proved sustainable. This somewhat hopeful and mostly sobering conclusion emerges from O'Toole's beautifully written portraits of the accomplishments and challenges faced by two dozen enlightened capitalists over the last two centuries, from Robert Owen to Paul Polman. This is business history - and the study of the pursuit of corporate virtue - at its best.
Read more
10 people found this helpful
Report abuse

Gigi
5.0 out of 5 stars Reviewing half-way through
Reviewed in the United States on 11 April 2020
Verified Purchase
What an intriguing concept this book is. I have found the stories encouraging and illuminating. Despite the subtitle of this being a 'cautionary' tale, I'm one who generally roots for the underdog. An entire book devoted to them was too good to resist. I currently am reading a copy from my closed library, which hopefully will grant me time to finish this worthy tome. I purchased a copy here to send as a gift to my son. He leans politically left of me, so I have hopes that this will serve as a bridge between our two political stances. I will add more if I feel something new strikes me (and if I can figure out how to) towards the ending of this good read.
Read more
One person found this helpful
Report abuse
See all reviews
Back to top
Get to Know Us
Make Money with Us
Let Us Help You
And don't forget:
© 1996-2021, Amazon.com, Inc. or its affiliates