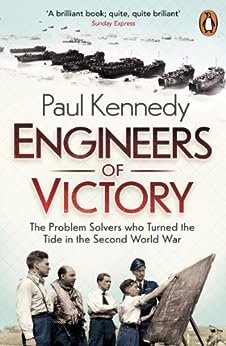 Engineers of Victory: The Problem Solvers who Turned the Tide in the Second World War Kindle Edition

by Paul Kennedy (Author) Format: Kindle Edition
See all formats and editions
Sorry, there was a problem loading this page. Try again.

From Paul Kennedy, author of The Rise and Fall of the Great Powers, one of the most acclaimed history books of recent decades, Engineers of Victory is a new account of how the tide was turned against the Nazis by the Allies in the Second World War.

In January 1943 Churchill and Roosevelt and the Combined Chiefs of Staff met in Casablanca to review the western Allies' war aims and strategy. They realised that to attain their ultimate aim of 'unconditional surrender' they would have to achieve some formidable objectives - win control of the Atlantic sea-lanes and command of the air over the whole of West-Central Europe, work out how to land on an enemy-held shore so that Continental Europe could be retaken, how to blunt the Nazi blitzkrieg that a successful invasion would undoubtedly provoke, and finally how to 'hop' across the islands of the Pacific to assault the Japanese mainland. Eighteen months later on, as Paul Kennedy writes, 'these operational aims were either accomplished or close to being so.'

The history of the Second World War is often told as a grand narrative. The focus of this book, by contrast, is on the problem-solvers - Major-General Perry Hobart, who invented the 'funny tanks' which flattened the curve on the D-Day beaches; Flight Lieutenant Ronnie Harker 'the man who put the Merlin in the Mustang'; Captain 'Johnny' Walker, the convoy captain who worked out how to sink U-boats with a 'creeping barrage'. The result is a fresh perspective on the greatest, conflict in human history.

Paul Kennedy is one of the world's best-selling and most influential historians. He is the author or editor of nineteen books, including The Rise and Fall of the Great Powers, which has been translated into over twenty languages, Preparing for the Twenty-First Century, The Parliament of Man and the now classic Rise and Fall of British Naval Mastery.

"Superbly written and carefully documented . . . indispensable reading for anyone who seeks to understand how and why the Allies won."--The Christian Science Monitor

"An important contribution to our understanding of World War II . . . Like an engineer who pries open a pocket watch to reveal its inner mechanics, [Paul] Kennedy tells how little-known men and women at lower levels helped win the war."--Michael Beschloss, The New York Times Book Review "Histories of World War II tend to concentrate on the leaders and generals at the top who make the big strategic decisions and on the lowly grunts at the bottom. . . . [Engineers of Victory] seeks to fill this gap in the historiography of World War II and does so triumphantly. . . . This book is a fine tribute."--The Wall Street Journal

"[Kennedy] colorfully and convincingly illustrates the ingenuity and persistence of a few men who made all the difference."--The Washington Post "Kennedy has produced a fresh perspective on the war, giving us not just another history of an overfamiliar conflict, but a manual of technical problem-solving, written in the clearest and most compelling style, that could still prove useful to modern management today."--The Telegraph (UK)

"This superb book is Kennedy's best."--Foreign Affairs "Paul Kennedy . . . has thus achieved a notable feat in bringing a large dose of common sense, historical insight and detailed knowledge to bear in his refreshing study of what might be called the material history of the second world war. . . . This material history of strategy asks the right questions, disposes of clichés and gives rich accounts of neglected topics."--Financial Times "Paul Kennedy's history of World War II is a demonstration not only of incisive analysis and mastery of subject, but of profound integrity, and a historian's desire to celebrate not great leaders but the forgotten scientists, technicians, and logisticians who gave us the tactical edge, without which the strategic designs could never have been achieved."--Robert D. Kaplan, author of The Revenge of Geography "Kennedy's fine-grained analysis and suspicion of any one single cause--like cipher cracking, intelligence and deception operations, or specific weapons systems, like the Soviet T-34 tank--permit him to persuasively array his supporting facts. . . . An absorbing new approach to a well-worked field."--Kirkus Reviews (starred review) "A fresh and stimulating approach."--Publishers Weekly From the Hardcover edition. --This text refers to an alternate kindle_edition edition.

'Consistently original ... Like an engineer who pries open a pocket watch to reveal its inner mechanics, Kennedy tells how little-known men and woman at lower levels helped win the war ... An important contribution to our understanding' Michael Beschloss, The New York Times Book Review

How, when it came down to it, did the Allies win the Second World War? How did they win the Battle of the Atlantic, blunt the Nazi blitzkrieg, work out how to land successfully on an enemy held shore on D-Day, and 'hop' across the islands of the Pacific to assault the Japanese mainland?

Here Paul Kennedy reveals the role of the problem-solvers and middle-men who made it happen - such as Major-General Perry Hobart, who invented the 'funny tanks' which flattened the D-Day beaches; or Captain 'Johnny' Walker, who worked out how to sink U-boats with a 'creeping barrage'. This book, by brilliantly answering the 'how' question, shows the conflict in an entirely new light.

'This first-rate book makes us reflect on the past and also leads us to think more deeply about the present and future' Graham Farmelo, Times Higher Education

Paul Kennedy is one of the world's best-selling and most influential historians. Born and bought up in Newcastle-upon-Tyne, he took his doctorate in Oxford and began work shortly afterwards for the first great historian of the Second World War, Sir Basil Liddell Hart. He now teaches at Yale, and is the author or editor of nineteen books, including The Rise and Fall of the Great Powers, which has been translated into over twenty languages, Preparing for the Twenty-First Century, The Parliament of Man and the now classic Rise and Fall of British Naval Mastery. --This text refers to an alternate kindle_edition edition.

4.1 out of 5 stars
4.1 out of 5
396 global ratings
How are ratings calculated?
To calculate the overall star rating and percentage breakdown by star, we don’t use a simple average. Instead, our system considers things like how recent a review is and if the reviewer bought the item on Amazon. It also analyses reviews to verify trustworthiness.

Martin Kuskis
2.0 out of 5 stars Not to my taste
Reviewed in Australia on 23 April 2021
I approached this book with high hopes but after 60 pages I’d had enough. The problem for me is the author’s writing style: why use a moderate word when a more emotive, exaggerated one will do? His favourite adjective seems to be ‘vastly’, which I counted four times in three pages. On page 54 he refers to “the ungainly but wonderful Bogue-class escort carriers”. Huh? After a while, this overheated style draws attention to itself rather than the subject matter. I much prefer the understatement which is customary with British historians.
As other reviewers have pointed out, the book contains errors of fact. For example, on page 55 the author twice refers to depth charges being proximity-fused, which (in WW2) is nonsensical. I was also not enamoured of the book’s underlying tone of triumphalism. In this it reminded me of another book which I could not bear to finish (and would not recommend), Victor Davis Hanson’s The Second World Wars. Surely now, more than 70 years after the event, it is time to move to a more objective viewpoint.
Since this book is a bestseller and has attracted glowing reviews from reputable sources, it is not for me to say that you should not acquire a copy. But when I have a stack of other books waiting to be read, this one is not worth my time.

Geoff
3.0 out of 5 stars Not what it says on the tin
Reviewed in the United Kingdom on 12 June 2013
Verified Purchase
The author is a historian and the history parts are very good indeed (except one wonders at the need to go back to ancient Greece when discussing seaborne invasions - padding?)
But then when you get to the bits about "the problem solvers who turned the tide" it all gets a little vague. A couple of engineers are named (book title!) but I formed the impression that the technical aspects of their work were a little beyond the comprehension of the author. For instance, I know what a cavity magnetron is and what it does but reading this book it never gets beyong the realm of clever gizmo.
Read the historical backgrounds - they are excellent- but don't expect to get any understanding of the more technical stuff or knowledge of the problem solvers.

HARRY H
1.0 out of 5 stars Very Misleading Title
Reviewed in the United Kingdom on 20 June 2016
Verified Purchase
I thought I might glean a bit more information to engineers and there work during WW2, but nothing new in this book. It gave me the impression that this book was made up of lecture notes bundled together,a lot of repetition and general history of WW2 during a certain time frame.
I was surprised that it took the author four years to write,a very shallow look at problem solvers during wartime.

A. Hammock
3.0 out of 5 stars Well, it was quite interesting, but also disappointing ...
Reviewed in the United Kingdom on 8 November 2015
Verified Purchase
Well, it was quite interesting, but also disappointing. I expected to learn about the "Engineers of Victory" but there was almost nothing at all about the individuals involved. It might have been more accurately titled "How the various technical developments enabled victory". There are some interesting insights, but they are almost irritatingly re-stated several times and there are some alarming basic technical mistakes and misunderstandings that made me question the depth of research.
Read more
One person found this helpful
Report abuse