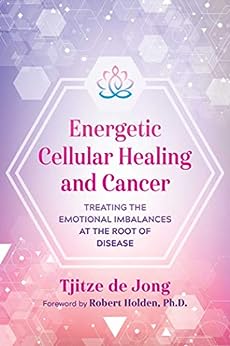 Energetic Cellular Healing and Cancer: Treating the Emotional Imbalances at the Root of Disease Kindle Edition

“The mind-body connection is irrefutable now, thanks to the discoveries of neuroscience. What is also uncontested is the power of personal advocacy and patient engagement in the healing process, particularly in regard to breast cancer. Tjitze de Jong takes this one step further by elucidating the link between emotions and cellular change. Pointing to how specific shifts in daily life can offset cancer’s progress, Tjitze de Jong opens a portal into sustainable health care for everyone. As a neuroscientist who has specialized in resolving trauma for populations at risk, I celebrate Tjitze de Jong’s book. It speaks to how individuals can act courageously to step into the center of their own health care through awareness, consciousness, and subtle adjustments in lifestyle. This brings not only hope but real physiological change through the mind-body communication networks that are innate in all of us.” ― STEPHANIE MINES, Ph.D., founder of the TARA Approach for the Resolution of Shock and Trauma and auth

“Psychologist Dr. Hans Eysenck demonstrated that 75 percent of people who died of cancer had lifelong depression, 15 percent had lifelong anger, and 9 percent had both! This is just one medical confirmation of Tjitze de Jong’s work. You cannot afford the luxury of anger, guilt, anxiety, or depression. The answer is energetic cellular healing!” ― C. NORMAN SHEALY, M.D., Ph.D., founding president of the American Holistic Medical Association

“Tjitze is a wonderful person, a phenomenal complementary energy healer, and now he turns out to be an engaging author on a tough topic as well. The notion that cancer may develop as a result of self-harming beliefs may not come as welcome news to everyone. Those who are willing to see illness as a portal to healing and health will be enriched by the insightful theory and moving portraits of those who have gone before in this important book, Energetic Cellular Healing and Cancer.” ― LISETTE SCHUITEMAKER, Brennan Healing Science graduate and author of The Childhood Conclusions Fix

“In an almost exaggerated fashion, the cancer discussion concentrates on physical problems, without taking into account the emotional, social, energetic, and even spiritual aspects which are at play. This often leads to a rather tension-filled fight against our own body, whereas these other elements of our daily existence can bring a deeper connectedness and liberate our potential toward self-healing. In Energetic Cellular Healing and Cancer, you can tap into a nuanced viewpoint of all aspects of illness. This book contains quite a unique combination of theory, practical examples, and exercises and opens up a path toward a holistic approach and a deeper trust in your powers of self-healing and the wisdom of your body.” ― HENK FRANSEN, M.D. (Netherlands), has accompanied individuals with cancer for more than 30 years, sp --This text refers to an alternate kindle_edition edition.

Tjitze de Jong is a teacher, complementary therapist, and energy healer (Brennan Healing Science) specializing in cancer, with more than 20 years’ experience in his field. In 2007, he founded Tjitze’s Energetic Cellular Healing School (TECHS), sharing healing skills with practitioners around the world. The author of Cancer, A Healer’s Perspective, he is based within the spiritual community of Findhorn, Scotland. --This text refers to an alternate kindle_edition edition.

DNA is the hereditary material in humans and almost all other organisms. Nearly every cell in a person’s body contains the same DNA, the information containing all that we humans embody, feel, think, and connect with. Gradually humanity is coming to grips with the fact that DNA may well hold the key to our genetic make up. Does it also hold the key to our health, to our unhealthy, and to our healing?

One researcher, Dr. Vladimir Poponin believes that his discoveries have tremendous significance for the explanation and deeper understanding of the mechanics underlying subtle energy phenomena, including many of the observed alternative healing modalities. One of the revolutionary experiments is called ‘DNA Phantom Effect’. Its conclusions state:

● a type of energy exists that has previously gone unrecognized

● cells and DNA influence matter through this form of energy

Produced under controlled laboratory conditions Poponin developed evidence of the powerful relationship between specific frequencies of energy and specific states of wellbeing that ancient traditions have held sacred for centuries. The DNA changed the behaviour of light particles – the essence of our entire world with all that exists in it. Scientific discoveries like these show ancient healing methods in a very different light and validate their potential. As millennia-old wisdom from the east meets western science, the chasm between both worlds narrows.

“Harmonic induction” is the effect that one field/tone/frequency has on the other. The tuning fork with its sensitivity to vibration makes this phenomenon easily visible. Why would such sensitivity limit itself to a mere metal structure? Each aura of each object or living being shows the same capacity to harmonize with the frequency of another. The key to the importance of DNA with regard to health lies in the subtle phenomenon of harmonic induction. Herein lies the bridge which links Braden’s theories, exemplified by the 3-minute cancer cure in the Chinese cancer hospital, with the water molecule experiments of Emoto and with the energy frequency measurements of Tainio.

For an ill person, someone with a low energy frequency, to be in the company of a person embodying a significantly higher frequency, is already a healing experience. For this very reason, participants and students wish to remain close to a teacher or guru during meditation, yoga, or tai chi classes. The energy field of a person practicing such disciplines regularly has been measured to be of a considerably higher frequency than that of a layperson. For this reason, it is one of the main responsibilities of practitioners of energetic healing to embody a higher frequency of energy than their client.

Once we validate and recognize the full impact of the subtlety of energy changes, and of physical, emotional, mental and spiritual changes and how they instantaneously affect the human DNA, we may well find the key to our health and well being.

FROM CHAPTER 29, “CANCER AND EMOTIONAL IMBALANCES”

“She started off telling her mother’s story. Mum had suffered a long sickbed before death put an end to two years of agony. Pauline had supported her mother devotedly through a period of slowly progressing ovarian cancer. The impact of witnessing mother gradually weakening had been strong on the daughter . . . she developed the strong belief that she would also at some point in her life be faced with ovarian cancer. Sure enough, a couple of decades later all suspicions were confirmed.”

Most likely, Pauline’s (over-)identification with mother’s fate has been instrumental in creating her self-debilitating belief system.

Her belief system fed cancerous cells energetically (self-fulfilling prophecy). The mindset of doom and gloom reduced the energetic flow in aura and chakras and therefore created a feeding ground for cancerous cells to multiply and spread.

When working with a client whose thought patterns follow a similar pattern to Pauline’s, I basically follow two approaches:

Firstly, I try and disentangle mother’s relational cords in the client’s chakras. As a result, the debilitating (over-)identification can be reduced or halted totally and the client grows more strongly into their own identity, independent from the other.

From Patricia’s Story: “I explored relational cords during our third session. Through working with her cords, chakra three opened wider and deeper than before. Lots of sadness and anger surfaced and were expressed, especially from throat and jaws, through screaming. Fists pounded the couch in unbridled rage.”

This is an essential step for all individuals at all times: shifting from dependency to independency or a healthy mutual interdependency, based upon an equal flow of two-way communication.

Secondly, I verbally emphasize, that mother and client are two very different individual human beings. Intricately related, yes, but each with a unique past, present and future.

Jaquie Segrove
5.0 out of 5 stars We all need to read this book... buy one for someone you know.
Reviewed in the United Kingdom on 30 April 2021
Verified Purchase
I have been waiting for this book for a long time, even before it was written Tjitze had mentioned that it was his plan to write this book. Mine was delivered yesterday and although I have not read the whole book yet I eagerly dived in to see the contents and read a few pages. There is so much content in this book and from the contents page I can see it really covers everything people need to know. The excepts I have read were powerful and insightful. I look forward to completing this book and congratulations go to Tjitze for pouring so much loving energy into this gem aimed at enlightening, creating self-awareness and awakening who we really are.
Read more
Report abuse

Rob Bonfrer & Marjo Post
5.0 out of 5 stars Profound and thoroughly Healing book
Reviewed in the United States on 24 March 2021
Verified Purchase
The best I have ever read about energetic healing and a very good reference book for a TECHS healer.