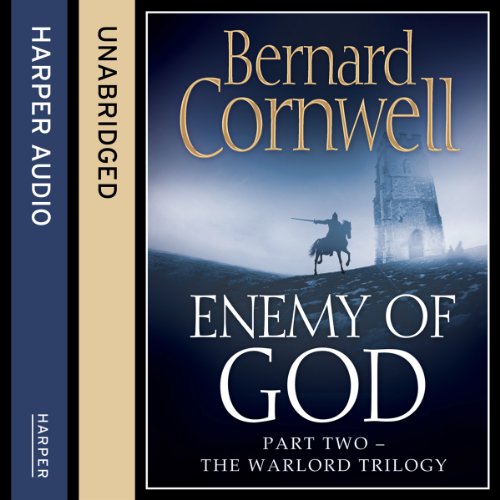 4.6 out of 5 stars
4.6 out of 5
1,696 global ratings
How are ratings calculated?
To calculate the overall star rating and percentage breakdown by star, we don’t use a simple average. Instead, our system considers things like how recent a review is and if the reviewer bought the item on Amazon. It also analyses reviews to verify trustworthiness.

Anne
5.0 out of 5 stars An Epic Story
Reviewed in Australia on 31 March 2019
Verified Purchase
Book two continues this epic story of Arthur. The action and intrigue heats up and Arthur finds some of the people he thought were friends were using him for their own advancement. Mordred turns out to be as much a nightmare as a king as he was as a child. Some plot to kill Arthur and his friend Derfel, and others plot to destroy their happy families. In short there is plenty to keep you turning the pages. I loved every minute of it and I cant wait to read the final chapter Excalibur. There have been many versions of the life and times of Arthur both books and movies, but this is by far the best version I have encountered so far. Bernard Cornwall has a great imagination and he tells a very convincing tale.
Read more
One person found this helpful
Helpful
Report abuse

Robert Evans
5.0 out of 5 stars Great read
Reviewed in Australia on 7 July 2014
Verified Purchase
The characters have interesting plot lines and the political aspects depicted in the novel are well blended in with the brutality of that era.
Read more
Helpful
Report abuse

Peter - The Reading Desk
5.0 out of 5 stars Outstanding telling of the magical King Arthur story
Reviewed in the United Kingdom on 17 September 2019
Verified Purchase
The second book of the Warlord Chronicles, Enemy of God takes this epic Arthurian story up another notch. The political manoeuvrings, personal quests, mix of diverse personalities, and the unpredictable relationships between male and female characters, makes for captivating reading.

The compelling feature of this novel is the extent and depth of how characters are developed and how the plot is full of unique twists and surprises. Within this environment of hidden machinations and power struggles, Arthur is winning battles he feels he needs to fight and striking alliances where he can. His vision is a unified Britain that can defend against the Saxon invasions. While his war strategy can be clever, personal relationships often deteriorate which harbour resentment and retaliation.

Derfel narrates the story from a first-person perspective and it was very clever to create him as a new character (within the context of the traditional Arthur story) without preconceived baggage. Derfel is highly trusted by Arthur, not only for his loyalty but his capability to deliver on Arthur’s plans. He finds himself appointed Lord Derfel, Dumnonia’s Champion and betrothed to Guinevere’s sister Gwenhwyvach, although he is oath-bound to Ceinwyn. Derfel finds himself responsible for assisting in the upbringing of Mordred who is becoming a nasty, evil and unforgiving heir to the throne.

The story arcs around Arthur, Guinevere, Derfel, Lancelot, Ceinwyn, Galahad, and Merlin are superb and weave together with such masterful storytelling. The love triangles are enthralling, where promises and oaths are fickle and risk of conflict threatens with destructive consequences.

The religious struggle between the old pagan gods and the growing influence of Christianity is very intriguing. Merlin as a Druid is on a quest to find the Cauldron of Clyddno Eiddyn.
“The Cauldron was the greatest Treasure of Britain, the magical gift of the old gods, and it had been lost for centuries. Merlin’s life was dedicated to retrieving those Treasures, and the Cauldron was his greatest prize. If he could find the Cauldron, he told us, he could restore Britain to her rightful Gods.”
Derfel finds himself torn between both beliefs and prays at pagan shrines while later becoming a Christian monk. Arthur is also someone who tries to play a delicate noncommittal game between the old and new gods. Unfortunately, the Christians intent on seizing eradicating false gods recognise him as the enemy of their god.

The enchanting writing style is engaging and the story-telling is exceptional, with a magnetism that prevents you from setting the book down. I normally expect the middle book in a trilogy to slacken from the first book and allow a build-up to the last but this one is better and I’m excited to see what awaits in the third. I highly recommend this book and couldn’t contemplate giving anything less than 5 stars.
Read more
6 people found this helpful
Report abuse

Rick Brindle
4.0 out of 5 stars A really good second installment
Reviewed in the United Kingdom on 23 August 2020
Verified Purchase
More top storytelling by Bernard Cornwell. This is the second Arthur novel, dealing with Guinivere and Lancelot, and Derfel's romance with Cienwyn. Four stars instead of five due to overly long prose that could perhaps have been pruned, and possibly a bit more dialogue.

CaroleQ
4.0 out of 5 stars Enemy of God
Reviewed in the United Kingdom on 27 June 2018
Verified Purchase
Enemy of God

The second in Bernard Cornwell’s trilogy of books dealing with King Arthur. Written again through the eyes of Derfla the former warrior turned monk it paints a picture of the mythological figure which bears little resemblance to the tales that came in later centuries.

Arthur strives to bring the Britons together under one leader in order to meet the challenge of their greater enemy the Saxons. He succeeds in achieving that though the resolution with the Saxons is not one he would have personally liked and he fears it will only give them a temporary peace.

Merlin continues his quest for the treasures of Britain and he and Derfla have to put themselves into extreme peril to gain some of them. Merlin believes that used properly the treasures will be an asset in restoring the Britons to their true place as leaders of Britain. Just when it appears that all is falling into place the treasures go missing.

Derfla has now settled down and with that new status comes major responsibilities. He now has a family and their well-being and safety is paramount. He also has the responsibility of raising the boy-king Mordred which is not without his challenges. His relationship with Arthur is also put under pressure and he finds himself questioning some of Arthur’s ideas and decision. It may be a time of peace but there is an undercurrent of tension behind most things and events.

The new Christian religion continues to grow and starts to put pressure on the old pagan ways. The forthcoming year of 500AD is seen by many Christians as the time when their God will return. Paganism has to be wiped out by then. Against this background many are planning and plotting to achieve their own ends in order to gain wealth and advantage over others.

An excellent tale where Cornwell seeks to look behind the myths at the likely reality of the time. There are few records of this period in history so the evidence is not there to either confirm or deny the events of that time. What we do have is a truly wonderful story where the tales of greed, desire and cruelty are perhaps more accurate than we may want to believe.
Read more
One person found this helpful
Report abuse

Vanessa
5.0 out of 5 stars magical and beautiful read..
Reviewed in the United Kingdom on 2 October 2018
Verified Purchase
Bernard Cornwall is the master craftsman, he paints pictures with words.. I absolutely love his books. These stories about Arthur and the era he lived in are told with such conviction, that you could be an onlooker stepping inside the story. I love the character Derfel. He is a mighty warrior, oathsworn to Arthur, he's Arthur's righthand man, but also his friend, although they do have a major fallout along the way, but they eventually make up.. I would love to see these characters come alive in the cinema, people who don't read need to see this Arthur.. Books are the best.. I'm sorry to have finished this epic book, roll on the next one.. I would certainly recommend to anyone who is interested in Arthur, Lancelot, Merlin etc to read these three epic books.. They are so believable, a pure tale of mystical bygone Britain they are not for the faint hearted as Bernard Cornwall loves a good battle... A woven tapestry of magical mysteries..covered in grit . I can't wait to carry on my journey with Derfel, the warrior.. Arthur has been betrayed..let's see how he's going to get his revenge.... Thank you Bernard Cornwall for such a colourful, magical and beautiful read..
Read more
2 people found this helpful
Report abuse

Bob Richards
5.0 out of 5 stars Second of three
Reviewed in the United Kingdom on 13 September 2021
Verified Purchase
Having just finished The Winter King I couldn’t wait to move on to part two of this trilogy. I wasn’t disappointed! The action comes thick and fast and the story of this “dark ages” period of our history is lit up and taken forward another step towards the eventual Saxon domination of Britain. Part three still awaits!!
Read more
Report abuse
See all reviews
Back to top
Get to Know Us
Make Money with Us
Let Us Help You
And don't forget:
© 1996-2021, Amazon.com, Inc. or its affiliates