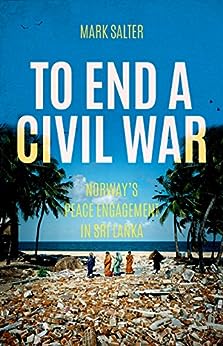 by Mark Salter (Author) Format: Kindle Edition
See all formats and editions
Sorry, there was a problem loading this page. Try again.
Between 1983 and 2009 Sri Lanka was host to a bitter civil war fought between the Government and the Tamil Tigers, which sought the creation of an independent Tamil state. In May 2009 came the war's violent end with the crushing defeat of the Tamil Tigers at the hands of the Sri Lanka Army. But prior to this grim finale, for some time there had been hope for a peaceful end to the conflict. Beginning with a ceasefire agreement in early 2002, for almost five years a series of peace talks between the two sides took place in locations ranging from Thailand and Japan to Norway, Germany and Switzerland.

To End a Civil War tells the story of trying to bring peace to Sri Lanka. In particular it tells the story of how a faraway European nation--Norway--came to play a central role in efforts to end the conflict, and what its small, dedicated team of mediators did in their untiring efforts to reach what ultimately proved the elusive goal of a negotiated peace.

In doing so it fills a critical gap in our understanding of the Sri Lankan conflict. But it also illuminates in detail a much wider problem: the intense fragility that surrounds peace processes and the extraordinary lengths to which their proponents often stretch in order to secure their progress.
Read more
Previous page
Next page
Kindle e-Readers
Kindle Fire Tablets
Free Kindle Reading Apps
See all supported devices


Such a book, an intimate and forthright account of Norway's thankless engagement in Sri Lanka for peace and national reconciliation, is long overdue. ... The sobering lesson we should all learn from these intractable experiences is that the final outcome of these efforts depends ultimately on political circumstances which are beyond the control of peace-makers. -- Yasushi Akashi, United Nations Under-Secretary General for Humanitarian Affairs and Emergency Relief Coordinator
Proximity can bruise relationships, especially when it is as close as India's to Sri Lanka. Distances can shake hands with greater facility. So when 'distant Norway' suggested to embattled Sri Lanka it had expertise to share in making and keeping peace, India was sceptical but encouraging. Norway's bid in Sri Lanka to retrieve life from death did not triumph, but were its efforts in vain? Some soils hold their germinal stirrings for delayed ripening. And Norway may yet find its engagement in Sri Lanka comes to fruition. -- Gopalkrishna Gandhi, former Governor of West Bengal and High Commissioner to Sri Lanka
Peace finally came to Sri Lanka. But not without heroic efforts on the part of the Norwegian government. Its determination to support the aspirations of all Sri Lankans in the face of withering criticism deserves our respect and is a story worth telling. -- Richard L. Armitage, United States Deputy Secretary of State, 2001-2005
An important read for all of us seeking to learn more about peaceful, negotiated means to solve conflicts. This book gives us lessons learned, always useful in our ongoing quest to find new ways to prevent and stop violence. Brave stories from two countries with a special place in my heart: Norway and Sri Lanka. --Margot Wallstöm, Swedish Foreign Minister
A very detailed account of Norway's efforts to resolve the conflict in Sri Lanka drawn from more than fifty interviews of people involved in the peace effort. . . . The book contains an impressive amount of research and access to many principals, which is useful to diplomats and scholars interested in peacebuilding broadly and Sri Lankan history specifically.-- Terrorism and Political Violence
--This text refers to the paperback edition.


Mark Salter is a journalist, analyst and writer. Starting out as a BBC radio journalist he has since specialized in Central European, West African and most recently South Asian affairs. He first visited Sri Lanka in 2002, and has been a regular visitor ever since. This is his second book.
--This text refers to the paperback edition.

Slightlycomedic
5.0 out of 5 stars Fascinating
Reviewed in the United Kingdom on 20 January 2017
Verified Purchase
A very detailed account of Norway's attempts to broker a permanent peace settlement in Sri Lanka. A very useful book for research, certainly, but equally fascinating for the general reader as it is goes into remarkable detail about just how complicated it can be behind the scenes of international diplomacy.
Read more
Report abuse

Kagusthan Ariaratnam
5.0 out of 5 stars Five Stars
Reviewed in Canada on 6 November 2017
Verified Purchase
Very fascinating book!
Read more
Report abuse
See all reviews
Back to top
Get to Know Us
Make Money with Us
Let Us Help You
And don't forget:
© 1996-2021, Amazon.com, Inc. or its affiliates