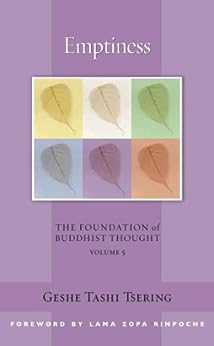 "Geshe Tashi's insights can be enjoyed by a wide audience of both specialists and newcomers to the Buddhist tradition. His presentations, never divorced from the basic humanity and warmth of his personality, combine rigor and accessibility."--Thupten Jinpa, principal translator for the Dalai Lama and director of the Institute of Tibetan Classics --This text refers to an alternate kindle_edition edition.

Geshe Tashi Tsering was born in Tibet in 1958 and received his Geshe Lharampa degree (similar to a doctorate in divinity) from Sera Monastery in India in 1987. Since 1994, he has been the guiding teacher of the Jamyang Buddhist Centre in London, while also teaching at other Buddhist centers worldwide. Gordon McDougall was director of Cham Tse Ling, the FPMT's Hong Kong center, for two years in the 1980s and worked for Jamyang Buddhist Centre in London from 2000 to 2007. He helped develop the Foundation of Buddhist Thought study program and administered it for seven years. Since 2008 he has been editing Lama Zopa Rinpoche's lamrim teachings for Lama Yeshe Wisdom Archive's FPMT Lineage series. Lama Thubten Zopa Rinpoche is the Spiritual Director of the Foundation for the Preservation of the Mahayana Tradition (FPMT), a worldwide network of Buddhist centers, monasteries, and affiliated projects, including Wisdom Publications. Rinpoche was born in 1946 in the village of Thami in the Solo Khumbu region of Nepal near Mount Everest. His books include Transforming Problems into Happiness, How to Be Happy, and Ultimate Healing. He lives in Aptos, California. --This text refers to an alternate kindle_edition edition.

4.8 out of 5 stars
4.8 out of 5
33 global ratings
How are ratings calculated?
To calculate the overall star rating and percentage breakdown by star, we don’t use a simple average. Instead, our system considers things like how recent a review is and if the reviewer bought the item on Amazon. It also analyses reviews to verify trustworthiness.

follower
5.0 out of 5 stars What needs to be said
Reviewed in the United States on 22 March 2021
Verified Purchase
Nothing ...as this is emptiness if one is in proper perspective...nothing to be said... nothing to be done except be in your moment...
Read more
Report abuse

Andres
5.0 out of 5 stars Recommended
Reviewed in the United States on 2 September 2018
Verified Purchase
Lots of spiritual info to grow with.
Read more
Report abuse

Catherine A., Jones
5.0 out of 5 stars great book
Reviewed in the United States on 23 January 2020
Verified Purchase
understanding of the meaning of emptiness
Read more
Report abuse
See all reviews
Back to top
Get to Know Us
Make Money with Us
Let Us Help You
And don't forget:
© 1996-2021, Amazon.com, Inc. or its affiliates