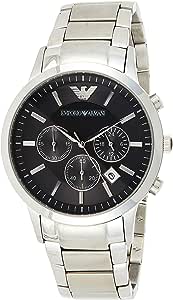 Everyone has a different story… and everyone wears Emporio Armani

Emporio Armani is the pioneering line launched by Giorgio Armani in 1981, aimed at the young. The name suggests its revolutionary character, as the term emporio (emporium) suggests a type of democratic fashion. From the start, Emporio Armani was a fashion phenomenon, and the logo, with its characteristic eagle, has become a symbol of belonging for its many young fans around the world. Over the years the collection has evolved and grown and today Emporio Armani is very much its own line, running in parallel to the main line, evoking a dynamic and uninhibited spirit. There are recurrent features such as casual style and aesthetic elegance, which are reworked season after season using a lively, metropolitan language. Emporio Armani expresses vitality and a carefree attitude, and possesses a particular allure and a special graciousness. This is a collection rich in ideas, always suggesting new ways of dressing to reflect the lifestyle of today’s youth.

4.5 out of 5 stars
4.5 out of 5
1,321 global ratings
How are ratings calculated?
To calculate the overall star rating and percentage breakdown by star, we don’t use a simple average. Instead, our system considers things like how recent a review is and if the reviewer bought the item on Amazon. It also analyses reviews to verify trustworthiness.

Nelly611
5.0 out of 5 stars Great watch
Reviewed in the United Kingdom on 4 April 2017
Style: AR2448Verified Purchase
Delivery was quick. The box it came in was a white armani box with a white pull off cardboard sleeve over it to protect it. Inside the box the watch was wrapped in a clear plastic bag with a tag on it. Inside was also an instruction booklet for all armani type watches so make sure you read the right one for the watch you have. There was also a certificate of authenticity which was small and looked like a tag but is real.

I bought this for my boyfriend as a Christmas present and he absolutely loves it. It looks even better on than the pictures and all of the dials work perfectly.

Because it's one if those watches that winds up the battery as you wear it, if you don't wear it for a few days it can go slow but winding the crown at the side winds it up again.

The dials are for stopwatch in seconds, stop watch in minutes and 24hour clock.

Amazing watch and well worth the price

gordon_whatever
2.0 out of 5 stars Hello This watch very good and it looks nice
Reviewed in the United Kingdom on 24 July 2018
Style: AR2448Verified Purchase
Hello
This watch very good and it looks nice.
However a few weeks ago the clasp stopped working so the watch is now unwearable. All the parts of the closing mechanism are still connected but they do not actually close, as if the mechanism is worn out. I take the watch off at night and put it on this the morning, I have had the watch for 1 year and I am surprised that an Armani watch would only last one year with normal use.
The listing guarantees a 2-year manufacturer warranty but it gives me no means of contacting the seller to activate the warranty. Could someone please contact me on this?
Thanks in advance.
Read more
4 people found this helpful
Report abuse

Bracken
5.0 out of 5 stars Happy to recommend
Reviewed in the United Kingdom on 23 December 2019
Style: AR2434Verified Purchase
Beautiful watch, genuine Armani 🙂
Whilst I’ve not taken this to be verified, from the photos and upon receipt: the chronograph settings are perfect; the packaging, box etc is embossed and not printed, likewise the labels, guarantee etc. Happy with purchase, happy to recommend
Read more
Report abuse

warren-t
5.0 out of 5 stars Gorgeous looking watch
Reviewed in the United Kingdom on 1 April 2020
Style: AR2434Verified Purchase
The watch looks expensive and very good quality, a lot of watch for the money, would recommend without hesitation, can't understand the poor reviews
Read more
Report abuse

Jules
5.0 out of 5 stars Wow
Reviewed in the United Kingdom on 28 December 2019
Style: AR2448Verified Purchase
Christmas present for my son. Delivery came quicker than expected. He is very happy with his watch. Good service and price. Seller kept us updated on delivery.
Read more
Report abuse
See all reviews

Page 1 of 1 Start overPage 1 of 1
This shopping feature will continue to load items when the Enter key is pressed. In order to navigate out of this carousel please use your heading shortcut key to navigate to the next or previous heading.
Back
Next
Pages with related products. See and discover other items: Best Rated in Men's Watches, Best Rated in Men's Wrist Watches, Best Rated in Men's Fashion
Get FREE delivery with Amazon Prime
Prime members enjoy FREE Delivery and exclusive access to movies, TV shows, music, Kindle e-books, Twitch Prime, and more.
> Get Started
Back to top
Get to Know Us
Make Money with Us
Let Us Help You
And don't forget:
© 1996-2020, Amazon.com, Inc. or its affiliates