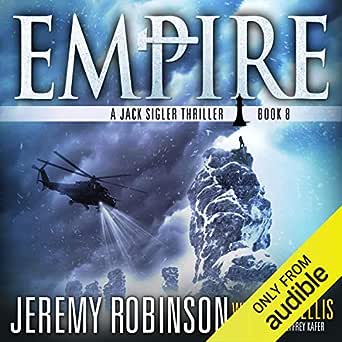 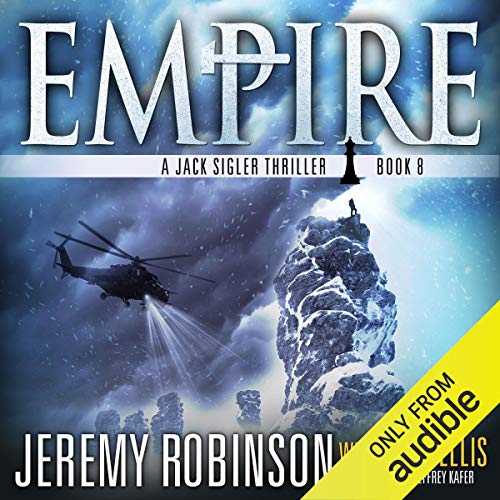 4.6 out of 5 stars
4.6 out of 5
90 global ratings
How are ratings calculated?
To calculate the overall star rating and percentage breakdown by star, we don’t use a simple average. Instead, our system considers things like how recent a review is and if the reviewer bought the item on Amazon. It also analyses reviews to verify trustworthiness.

Chezk
1.0 out of 5 stars Empire
Reviewed in Australia on 1 May 2016
Verified Purchase
Loved this book best Jack Sigler book I had another book different author but put it down this book took me bout four days to read this.
Read more
Helpful
Comment Report abuse
See all reviews

Kindle Customer1
3.0 out of 5 stars Its actually boring!
Reviewed in India on 12 June 2018
Verified Purchase
Was
Reading some of the other works written by the same author, this book is a let down. Very predictable till the very end. Not the usual page turner one would expect. One can safely give this one a miss.

claudette valliere
5.0 out of 5 stars Kudo's to the authors and thumbs up, way up for this one.
Reviewed in the United States on 31 May 2016
Verified Purchase
Another great Jack Sigler read by Robinson and Ellis. Spoiler alert.

This one starts in 1959 with the deaths of a group of skiers who skied close to something that killed them all.

Present Day, the Chess team is in Russia looking for a sign of a Russian research center. This team is attacked by a group of animals that capture them all. These animals are big, covered in fur and damned near unstoppable even for the Chess team. Of course this isn't Jack Siglers team. His team is still looking for Tom Duncan, Deep Blue on one side of the world, the Antarctic and looking for Julie Sigler in DC.

Queen, Rook and Knight are in the Antarctic and they find the black site where Duncan is believed to be held. Only problem is someone beat them to it. Blood is on the ice where bodies lay. Bodies that Queen believes were dragged off by Polar Bears. They never make it into the building covered in ice and snow and Blackhawk choppers pursue them. Queen decides to surrender to those in the choppers after listening to them request they surrender and come with them. They happen to be US troops.

Jack and his sister Asya are in DC at a warehouse. They are there looking for clues to the woman who looks like their sister Julie. A Julie who was killed twenty years ago in an accident with her F-14 Tomcat.

The warehouse is loaded with supplies and weapons. All the supplies are on pallets and in boxes covered with Russian writing. Jack and Asya are wondering what the hell these Russian supplies are doing in DC.

Guards head their way and Jack and Asya run and gun to get out, which they do.

Catherine Alexander, the woman who looks like Julie, is the head of the Consortium. A group of businessmen and politicians from around the world. A group who wants to rule the world. Alexander works for the President of Russia, a man with his own agenda. A man using Julie to make that agenda possible.

Jack and Asya reunite with the rest of the Chess team and Admiral Ward. A man who needs the help of the Chess team to investigate the disappearance of his Chess team. There are three teams and they are fashioned after the original. The Admiral will assist Jack and his Chess team any way he can. Jack decides that Queen, Rook and Knight will go to Northern Russia while he contacts his parents to let them know he thinks Julie is alive. Parents who decide they will be going with Jack and Asya.

So begins another great read by Robinson and Ellis.

This one has Jack Sigler call sign King, Asya call sign Bishop, Lou Aleman the Chess teams computer guru now using the Deep Blue call sign, Zelda call sign Queen, Stan Tremblay call sign Rook, Shin Dae-Jung call sign Knight, Admiral Ward, Peter and Lynn Marchanco Jack and Asya's parents, a Lynn and Peter who were former Russian spies, a Lynn and Peter who haven't forgotten how to kill and stay alive, a Peter and Lynn who are more than capable, a man named Vladamir who isn't who or what he appears to be, a fight in a giant toy story in Russia, a captured Jack and Lynn who are taken to the secret Russian research center under the earth the same place the rest of the Chess team is headed for, a lab geek named Alexie, the Phoenix, Knight and his new left eye, humanzees, the fur covered killers who guard the research center, a city under the compound, a giant killer who lives in that city, a killer who does his best to kill Jack and the rest of the Chess team, the President of Russia with his own plan, immortality, Master Sergeant Joseph Hager the last man left from Ward's captured Chess team, a man who was poisoned with radiation, a man who was used in tests by Alexie, a Sergeant who will give his life to protect the Jack's Chess team, and Jack Sigler and his team doing there best to figure it all out, foil the plot save their friends and stay alive.