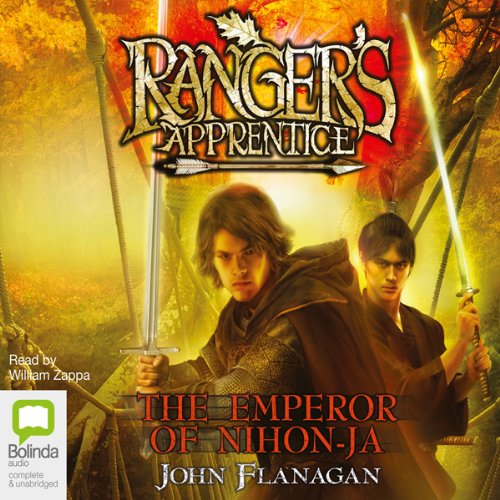 The Emperor of Nihon-Ja: Ranger's Apprentice

Horace is missing. Months have passed since he was sent on a military mission to Nihon-Ja. Evanlyn is worried, and in company with Will, Alyss, and Halt, she sets out to discover what has become of their old friend. They find that Horace has become embroiled in Nihon-Ja politics. The arrogant Senshi Sect has rebelled against the rightful Emperor, who Horace supports.

Now he and Will must turn farm and forest workers into a fighting force that can face the highly trained Senshi warriors, while Alyss and Evanlyn must overcome their longstanding rivalry to seek aid from a mysterious group of mountain dwellers.

Switch between reading the Kindle book & listening to the Audible narration with Whispersync for Voice.
Get the Audible audiobook for the reduced price of $30.72 after you buy the Kindle book.
Learn more about membership
By completing your purchase, you agree to Audible’s Conditions Of Use and Privacy Notice.
Sold and delivered by Audible, an Amazon company
Share