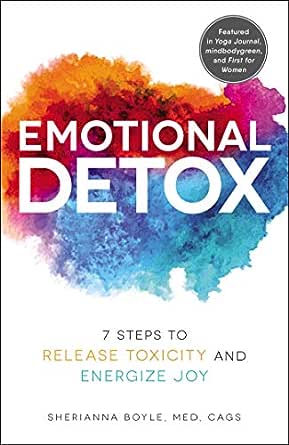 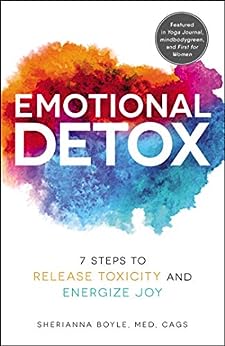 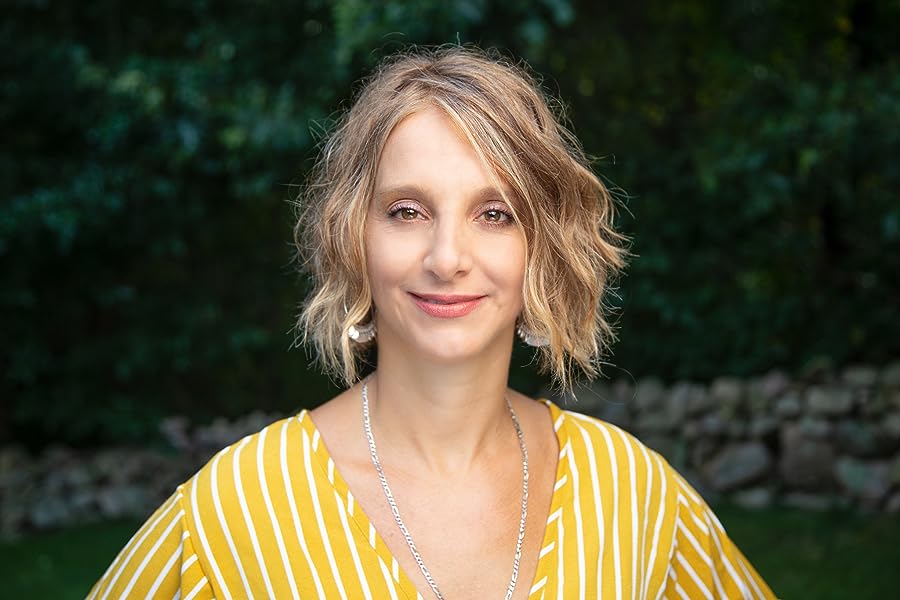 "Emotional Detox is a courageous story of true healing and unconditional love. It will wake you up, turn your views upside down, while providing you with life changing tools and insight. The C.L.E.A.N.S.E formula was simple and easy to implement. Whether you are struggling emotionally or not, this book is a MUST read!"

—Elizabeth Hamilton-Guarino, CEO of The Best Ever You Network and Hay House author of PERCOLATE

As featured on YogaJournal.com

"10 Life-Changing Self-Help Books Every Woman Should Read in 2019."

When we think of a detox, we usually think of a physical experience. But it’s not just our physical bodies that need to be cleansed of the impurities we encounter and absorb in our daily lives—it’s our minds too. When we find ourselves unable to process our negative emotions and feel them becoming toxic to ourselves and those around us, it’s time for an Emotional Detox, a mindful and systematic guide to freedom from these troublesome feelings.

Wellness expert Sherianna Boyle has created the revolutionary the 7-step C.L.E.A.N.S.E. method to help you rid yourself of negativity, fear, worry, anger, and doubt, and guide you back toward a natural, energized state of pure joy and acceptance. Learn how to Clear your pathways, Look inward, Emit positivity, Activate, Nourish, Surrender, and Ease your way into your best self and a happier and healthier life. Emotional Detox “will wake you up, turn your views upside down, while providing you with life changing tools and insight” (Elizabeth Hamilton-Guarino, CEO of Best Ever You Network and author of Percolate).

BBlair
3.0 out of 5 stars Emotional Detox: The Autobiography
20 March 2019 - Published on Amazon.com
Verified Purchase
The book is disappointing for a number of reasons, some structural and some functional.

Some unfortunate structural decisions weaken the usefulness of the book, one of them being the decision to include an autobiographical aspect. While this approach is entirely appropriate for blogging, for a book that promotes itself as an instructional manual on detoxing emotions it is a distraction. Yes, continuing to remind the reader about the affair the author experienced may provide a touch point for some. But because it detracts from the main purpose of the book - to teach the reader how to do an emotional detox - it takes space away from educational content that could have been more useful.

Another editorial decision, the forced folksy approach, is just off-putting. Well trained staff in services industries are taught not to call people "honey" or "sweety" because, well, it often triggers negative emotional reactivity. Rather counter to the theme of the book.

Next, the author makes some fairly controversial statements concerning quantum physics, the soul, theology, and energy medicine. It would have been helpful if she provided citations that backed up these statements.

Finally, it is unfortunate that the author chose to discuss toxicity issues in the first part of the book, rather than use that space to define her terms or at least briefly introduce the CLEANSE steps. This creates a situation where the author uses terms like "overprocessing emotions" before she adequately defines them, or references the CLEANSE steps before she has explained them. In fact, the author does a poor job of defining several terms in the book, to include "soul bliss". Without an adequate orientation, the reader is left with no frame of reference for what the author is talking about.

As to functional issues, given that the author is an adjunct psychology professor, I would have expected that she would have been more concerned with the reader's welfare. There are emotional issues that cannot be "detoxed" including suicidality, active mental illness, active abuse, and active addition. Even a short paragraph addressing this important issue and directing the reader to professional help would have gone some distance making the book more beneficial.

Another major functional issue is that the author is continually undermining her credibility. Here are some examples:
1. "I would blame my bloated stomach on having babies and ignore the fact that I was rarely going to the bathroom. What no one told me, as Adam Hadhazy wrote in Scientific American, was that “95 percent of the body’s serotonin [known to elevate mood and alleviate depression] is found in the bowels.” I was blocking my body’s ability to produce serotonin!" (Constipation does not block serotonin synthesis - fortunately)
2. "Taking probiotics ... is a way to consume healthy bacteria that will help you remove toxins. Mixing one tablespoon of organic apple cider vinegar with a glass of water is one of the more affordable ways to do this." (Microbiome research is in its infancy. The role of probiotics in detoxification has not be clearly defined. Despite this, what does taking vinegar have to do with probiotics - or detoxification?)
3. "Think of your subconscious mind as your energy body. This subtle energy body has been recognized by yogis and healers for thousands of years through mind-body practices, such as certain types of meditation, yoga, or tai chi." (Mixing metaphors from Freudian/Jungian psychotherapy with Asian/Indian energetic practices is rarely wise. The subtle energy referenced here is most often called qi, prana, etc. The contention that this is the same as the subconscious mind would take considerable argument and scholarly documentation.)
4. "Here is the thing: if you want to change the template of emotional reactivity, you must change the energy... This approach is based on quantum physics." (This uncited, unsophisticated, New Age approach to quantum physics is a red flag that the writer has no idea what quantum physics actually is.)
5. "One of the most frequent ways resistance shows up is through bodily inflammation." (Inflammation is an immune system response to several types of challenges. What physiological mechanism is "resistance" triggering to provoke this response? Conversely, when I bang my knee and it swells up, is that a form of "resistance"? Should I take Ibuprofen to reduce my "resistance"?)

Other functional issues include definitive statements about the soul (based on what exactly?), use of sloppy terminology (to give one example, what the author calls a "pattern" is better defined as a "complex" from Jungian psychotherapy - why reinvent the wheel and confuse the reader?), and straining to make the "detox" analogy work (absorbing emotions like nutrients, praising "raw" emotions as superior without defining what "raw" is or why they are better, etc.)

In summary, this book is best thought of as an autobiographical account of how the author survived a harrowing affair and became a better person. Read in this way, the book can be quite helpful, even inspiring. But as a manual for actually doing an emotional detox, the book is a disappointment. The author has some legitimate insights into her topic of focus. Sadly, these insights are overwhelmed by a hodgepodge of often unsubstantiated bits of pop psychology, Facebook quality medical information, and faddish metaphysics, mixed in with personal experiences, that rarely rises above the level of a health coach blog. The author could have greatly benefited from the services of a very experienced and talented content editor.
Read more
60 people found this helpful

LJ
3.0 out of 5 stars Eh. Ok.
3 September 2019 - Published on Amazon.com
Verified Purchase
I would not have purchased had I been able to flip through it first. The good intentions to deliver helpful content are there, but I found it a little annoying that the author kept mentioning her husband's infidelity over and over again throughout the entire book, even though she kept talking about haven forgiven him. I like the topic, but this book was not for me.
Read more
6 people found this helpful

Wood
5.0 out of 5 stars I LOVE THIS BOOK
22 March 2019 - Published on Amazon.com
Verified Purchase
This is an amazing book. It took me a little while to really "get" it. It's not like a simple, straightforward book I would just read and digest and move on. (Though for anyone who wants to get right to the CLEANSE protocol, it's at the back of the book.) This is more a book to spend time with: to sit with, to highlight, to digest slowly. This ain't no quick fix. It's a protocol for shifting habits that create anxiety inside of us, and we must be willing to choose to implement the strategies offered. After 25 years of working on myself, I am amazed that I still habitually resist connecting deeply with myself. Sheri's strategies have helped immensely, but they will only create lasting change if I continue to choose them daily.
I strongly suggest working with Sheri in person (she teaches workshops at Kripalu Yoga Center and other places) or through her online course... that helps bring to life the strategies she offers.
Read more
4 people found this helpful

Dria B
2.0 out of 5 stars Meh.
6 November 2019 - Published on Amazon.com
Verified Purchase
I’m halfway through this book and I am seriously contemplating returning it. If I had a dollar for every time this author mentioned her husbands affair I’d be rich. That is not what I bought this book for. I don’t even want to finish reading it because of this. I wouldn’t waste your money or time on this one.
Read more
6 people found this helpful

Kym McNabney
5.0 out of 5 stars ALREADY PURCHASED MORE COPIES FOR FRIENDS AND LOVED ONES
22 June 2018 - Published on Amazon.com
Vine Customer Review of Free Product( What's this? )Verified Purchase
I am halfway through EMOTIONAL DEXOX: 7 STEPS TO RELEASE TOXICITY AND ENERGIZE JOY, by SHERIANNA BOYLE, and couldn’t resist writing a review before completing it. I am blown away by the insight I have already gained. So much so that I purchased two copies to give to others, wanting to share what I am learning. Unlike a few reviews, I found the information eye-opening and relevant. It is much more than treating your body right and living better.

From the back cover
Flush out negativity and clear a path for new positive habits, behaviors, and emotions with certified energy healer, yoga instructor, and psychology professor Sherianna Boyle’s emotional detox program, C.L.E.A.N.S.E.

When we think of a detox, we usually think of a physical experience. But it’s not just our physical bodies that need to be cleansed of the impurities we encounter and absorb in our daily lives—it’s our minds too. When we find ourselves unable to process our negative emotions and feel them becoming toxic to ourselves and those around us, it’s time for an Emotional Detox, a mindful and systematic guide to freedom from these troublesome feelings.

Wellness expert Sherianna Boyle has created the revolutionary the 7-step C.L.E.A.N.S.E. method to help you rid yourself of negativity, fear, worry, anger, and doubt, and guide you back toward a natural, energized state of pure joy and acceptance. Learn how to Clear your pathways, Look inward, Emit positivity, Activate, Nourish, Surrender, and Ease your way into your best self and a happier and healthier life. Emotional Detox is a much-needed reset for the soul.
Read more
One person found this helpful
Go to Amazon.com to see all 40 reviews 4.2 out of 5 stars
Get FREE delivery with Amazon Prime
Prime members enjoy FREE Delivery and exclusive access to movies, TV shows, music, Kindle e-books, Twitch Prime, and more.
> Get Started
Back to top
Get to Know Us
Make Money with Us
Let Us Help You
And don't forget:
© 1996-2020, Amazon.com, Inc. or its affiliates