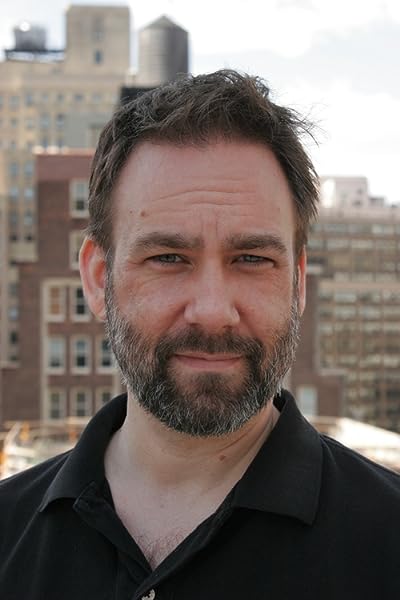 by Jeff Hirsch (Author)
4.3 out of 5 stars 237 ratings
See all formats and editions
Sorry, there was a problem loading this page. Try again.

Jeff Hirsch graduated from the University of California, San Diego, with an MFA in Dramatic Writing, and is the USA TODAY bestselling author of THE ELEVENTH PLAGUE and MAGISTERIUM. He lives in Beacon, New York, with his wife. Visit him online at www.jeff-hirsch.com.

Hi there. Thanks for stopping by. Here's a little about me:

I'm originally from Richmond, VA but now live in Astoria, NY with my wife who blogs and writes books about sewing and our two cats who don't contribute anywhere near as much to society.

I went to undergrad in North Carolina (studied acting) and then headed out to San Diego and got an MFA in dramatic writing.

I know how to escape from a strait jacket while suspended from the ceiling by my ankles.

If I ever have a dog I think I'd like to name him Jerry Lee Lewis.

I'm torn as to whether the coolest living human is A) Tom Waits or B) Prince.

The Eleventh Plague is my first book. Well, the first book that was ever published. There was this one about a teenage rockstar and her drag queen fairy godmother, but honestly, the less said about that one the better.

4.3 out of 5 stars
4.3 out of 5
237 global ratings
How are ratings calculated?
To calculate the overall star rating and percentage breakdown by star, we don’t use a simple average. Instead, our system considers things like how recent a review is and if the reviewer bought the item on Amazon. It also analyses reviews to verify trustworthiness.

Kitkat1984
4.0 out of 5 stars Keeps you wanting more
Reviewed in the United Kingdom on 10 May 2014
Verified Purchase
An exciting book that keep's you wanting to continue reading. The story keeps you guessing to the end with plenty of twists but the characters are well fleshed out and the background researched well.
Read more
Report abuse

Fragglemoo
4.0 out of 5 stars Full book wanted :-P
Reviewed in the United Kingdom on 3 November 2011
Verified Purchase
Well the sneak peak was promising but why can't I read the rest of it on my Kindle? Or do I have to go to my local library and borrow a real book o_O
Read more
9 people found this helpful
Report abuse

Ranger Book Reviews
4.0 out of 5 stars High School Confidential meets the End of the World: 4 Stars for 15 yr olds; 3 or less for those older
Reviewed in the United States on 22 September 2017
Verified Purchase
I love end of the world yarns and heard positive things about Jeff Hirsch's first novel. So despite being published by Scholastic and targeted to the 14-17 year old crowd, I decided to give it a chance... even though I am many, many moons beyond Junior Year in High School. The good thing about this book is that it has solid plotting and the writing is polished for a first novel. The opening chapters make you feel like you stepped into an alternative version of Cormac McCarthy's The Road except seen through the eyes of the boy, here an adolescent, fifteen year old Stephen Quinn, and minus the cannibals (although the 11th Plague baddies are pretty darn bad). But while the opening sequences are well done and exciting, once the action moves into the sanctuary of Settler's Landing, the novel starts to plod until it becomes nothing more than another boring high school drama with stock characters and artificial, soap-opera like tension to keep it interesting... if you are into that kind of thing. And no one over the age of 16 is. In fact, to call this a young adult novel and include 16 and 17 year olds in the targeted age range is an insult to 16 and 17 year olds who can surely handle meatier reading than this (I would have loved to share this with my sons when they were about 12. They would have liked it then). I lost interest in this book at the half-way mark. I think it would have been more interesting to follow Stephen and his father (and the most interesting character of them all, his deceased grandfather whose memory Quinn keeps evoking) on a trip across the devastated landscape of America after a biological war with China. Oh, well. Such is not the case. This is, at best, a three star novel. But since I am practically a senior citizen interloper here I will grudgingly offer up four stars to the 15 and under crowd who might actually like a high school drama set in the post-apocalypse. Enjoy, kiddos.
Read more
3 people found this helpful
Report abuse

JJCEO
4.0 out of 5 stars A good story that is well written!
Reviewed in the United States on 16 April 2012
Verified Purchase
This is a story about life in a post-apocalyptic America. Due to a misunderstanding war breaks out between China and the USA. The USA has bombed China and China has used bacteriological warfare against the USA. The Eleventh Plague kills most of the people in the USA and the survivor's civilization is thrown back about 200 to 300 years. Lawless violent roving bands seem to be common while the rest of the survivors scrape out a meager living.

Stephen Quinn is a 15 year old boy who was born after the war. He is surviving as a scavenger with his grandfather and dad by collecting miscellaneous items of small value to trade. Multiple tragedies strike and change Stephen's life drastically. He has to decide the path his life will take. Will he become a builder and a thinker, a scavenger or a destroyer? He has to decide his own path to live his life....

A very good story that is well written and could easily be made into a good movie. It is about a young boy being forced to grow up quickly in a world reborn from the remains of the old way of life. The storyline is reminiscent of Cormac McCarthy's book "The Road", but this story has its own merits. I have read both books and enjoyed them equally.

This book can easily be made into a sequel of the life Stephen lives and how the world redevelops. The balance of the world is yet to be explored to determine the state of civilization and mankind as a whole. It will be interesting how this new author, Jeff Hirsch, develops and releases his next book. Is it a continuation of this story or a new concept all together? Regardless of what he writes he has good potential and I hope he hits another home run!

This book is really a 4 1/2 star ranking but I am forced to choose 4 or 5 stars. I enjoyed this book and I believe you will also!
Read more
6 people found this helpful
Report abuse

Amazon Customer
2.0 out of 5 stars Promise Poorly Executed
Reviewed in the United States on 27 March 2012
Verified Purchase
While the premise of the book was intriguing and showed a lot of promise, the book itself failed to deliver. The war-torn American wilds provided only a brief setting, after which we were brought to the gated community where people liked to do their best to pretend nothing was wrong, down to sending their kids to school every day, and the main character having to deal with the local teen bullies. If I'd wanted to read another high school drama, I'd have bought one.

The things that dropped this from a mediocre three to a give-me-a-break two were the constant inconsistencies. In one scene the author has the character drop his knife as he's dragged away from a scene, and two minutes later he gripping his knife in anger. The school bell rings (I'm pretty darn sure those run on electrical signals), and he drops his rifle in the mud rendering it "useless until he can clean it" according to him, then fires it shortly thereafter.

I was also really unhappy with the way that the main character, who was born after the collapse, seemed to have an intimate and familiar understanding of everything from casinos (he could even name all the game tables!) to what exactly a McDonald's is and how a roller coaster might feel to ride. I would imagine that if you went into deep Africa or the Amazon to explain these things, the people there would not "get it" no matter how well you explained. Just like a kid born into a post-apocalyptic world should not instinctively be able to step up to an arcade game and pretend to play. Sorry, not buying it.
Read more
6 people found this helpful
Report abuse
See all reviews
Back to top
Get to Know Us
Make Money with Us
Let Us Help You
And don't forget:
© 1996-2021, Amazon.com, Inc. or its affiliates