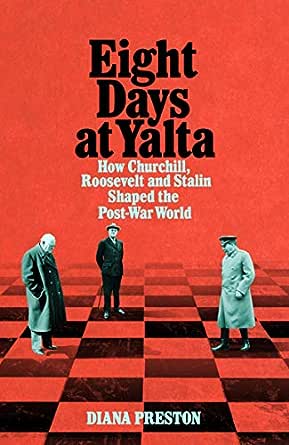 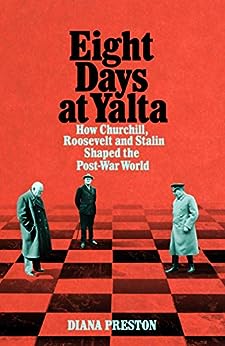 Diana Preston tells it fluently, perceptively and with meticulous scholarship. -- Rodric Braithwaite * Spectator * Diana Preston chronicles those eight momentous days brilliantly. * Choice Magazine * Impressively researched . . . expert account * Kirkus Reviews * Diana Preston's lively and nuanced account, place[s] the protagonists much more in their moment, as the war was still raging and they were making decisions based on the information to hand . . . shrewd . . . vivid scene-setting -- Victor Sebestyen * Sunday Times * Diana Preston brings dry diplomacy to life. Sound in historical judgement and strong on personalities and emotions, she gives the reader a special pass to watch the world-changing events in the Livadia Palace from all the closest angles. -- Norman Davies, author of Europe: A History

A riveting minute-by-minute chronicle of the February 1945 conference that shaped the outcome of one war – and gave birth to another.
See all Product description
click to open popover

Katherine Y
5.0 out of 5 stars Outstanding documentation of what happened at the Yalta Conference
8 November 2019 - Published on Amazon.com
Vine Customer Review of Free Product( What's this? )
I started reading this book with a vague understanding of what happened at the Yalta Conference in February 1945. Not only did I gain a better insight into the issues at stake, I felt as if I had a front-row seat watching the three principals, President Franklin D. Roosevelt, Prime Minister Winston Churchill, and Marshal and Chairman of the Council of People’s Commissars of the Soviet Union Joseph Stalin negotiate the terms by which they would cooperate to end WWII and establish peace. The author, Diana Preston, lays out clearly the public and private concerns of, both Churchill and Roosevelt before, during, and after the Conference.

Some of the questions to be addressed were:
• What surrender terms would be put to Germany. How was Germany going to be divided and what reparations would Germany make?
• What would happen to Poland? How would she be governed and what were going to be the country’s boundaries?
• How would the proposed United Nations be organized, and should Great Britain and the Soviet Union get additional seats for their territories?
• Under what terms would Russia go to war with Japan?
• What role would France have in the governance and control of post-war Germany?

In addition to the day-to-day proceedings, the lavish breakfasts with caviar, the long afternoon meetings, and alcohol-fueled dinners, Preston delves into the minds of the leaders and their numerous aides. Roosevelt was only to live a few months after the Conference, so a picture emerges of a weakened and clearly ill President fussed over by his daughter, Anne Boettinger. Churchill was the outsized personality familiar to many ready to break into long speeches at any moment. Stalin was often inscrutable, preferring to allow Roosevelt to talk and Churchill to orate, not speaking unless necessary. Of course, all these meetings were facilitated by translators and advisors.

There were also light-hearted moments and amusing incidents such as Stalin trying out his English or ordering a lemon tree full of lemons to be provided to the British delegation’s lodgings. Due to the lack of bathrooms, many Conference participants were brought up short after trying to relieve themselves in the bushes, only to be found out by Soviet guards patrolling the grounds.

What Preston has accomplished with these pages is spectacular. She has given readers seats at the Conference as well as a description of what was going on in the world outside. EDaY is meticulously researched. I highly recommend this book to history buffs, those interested in diplomacy, and anyone who wants to better understand how the decisions made at Yalta affect the world decades later.

Michael J. Edelman
5.0 out of 5 stars First-rate history and compelling reading
14 November 2019 - Published on Amazon.com
Vine Customer Review of Free Product( What's this? )
In February of 1945, with victory in Europe certain, the leaders of the three great Allied powers met in Yalta, in the Crimea, to discuss how post-war Europe would be divided up. Two of them- Roosevelt and Stalin- represented the strongest militaries the world had ever seen. The agreement they reached determined not just the fate of their common enemy, but also who among the millions of survivors of the war would be allowed the right of self-government, and who would be condemned to living under a brutal dictatorship for the next forty-six years. In subsequent years the agreement has been both defended as the best possible agreement that could have been obtained under the circumstances, and condemned as the betrayal of millions that led to nearly half a century of slavery.

Franklin Delano Roosevelt was in the strongest negotiating position in many ways. The armies and navy of the United States occupied not just all of Western Europe, but also parts of the Mideast, and he had at his disposal the world’s first and still only nuclear weapons. But he was a poor negotiator, a man who relied on instincts, ignored advice, belittled his ally, Churchill, and thought he could easily handle Stalin. He was also dying. His mind and body were fading, and he would not live another year.

Winston Churchill arrived thinking he was coming as a full partner in negotiations with FDR, based on their previous pre-war association and wartime alliance. But FDR often dismissed and belittled him, preferring to try and charm Stalin. Stalin himself was jovial, friendly, and for the most part, inflexible. What compromises he made, he had no intention of keeping, knowing that his scientists were already working to come up with an atomic bomb that would end the US monopoly.

Stalin went on to violate most of the agreements made at Yalta within months. He seized all of Poland, half of Finland, and other nations occupied by Soviet forces, executed many or most of the Free Polish leadership, and attempted to isolate West Berlin in an attempt to take control of the entire city. Despite a promise to maintain the status quo in Korea, he supported and encouraged Kim Il-sung’s invasion of South Korea.

Historian Diana Preston has drawn upon the extensive historical record to document in detail the negotiations at Yalta, the private communications of the leaders and their advisors, the events in Europe and elsewhere that influenced, and were influenced by events at Yalta, and the immediate consequences of the agreement made. It’s not only first rate popular history, but a tremendously useful tool in understanding the origins of the Cold War and the post-War world.
Read more
One person found this helpful

Found Highways
5.0 out of 5 stars Three Allies, Spying on Each Other
14 November 2019 - Published on Amazon.com
Vine Customer Review of Free Product( What's this? )
In Eight Days at Yalta, historian Diana Preston tells the story of the meeting of Stalin, Churchill, and Roosevelt in the Crimea when they were on the verge of victory over Hitler.

It's odd that all three of the world leaders were desperate to meet, to the point they traveled long distances and put up with uncomfortable quarters, but they didn't prepare an agenda for their talks. Partly this may have been because they realized they now had differing goals.

Roosevelt was consumed with getting Stalin to support the United Nations. Churchill wanted FDR to help him keep the British Empire intact. Stalin was desperate to prevent the other two from accepting a separate deal with the Nazis and then turning on the Soviet Union.

The three allies were now at cross purposes and the Cold War was beginning.

Another major issue they had to decide was what kind of government Poland would have. Stalin's plans for the security of the Soviet Union consisted of a buffer zone of tame states in the West and in the Baltic. The people who lived in these countries had a different idea.

In a few months Harry Truman, not Roosevelt, would be making American foreign policy and Truman was less tolerant of Stalin than his predecessor.

In Eight Days at Yalta, Diana Preston goes into fascinating detail on the conflicts the three leaders had, the resolutions they agreed on, and the consequences for the world.
Read more
One person found this helpful
Go to Amazon.com to see all 17 reviews 4.9 out of 5 stars
Get FREE delivery with Amazon Prime
Prime members enjoy FREE Delivery and exclusive access to movies, TV shows, music, Kindle e-books, Twitch Prime, and more.
> Get Started
Back to top
Get to Know Us
Make Money with Us
Let Us Help You
And don't forget:
© 1996-2020, Amazon.com, Inc. or its affiliates