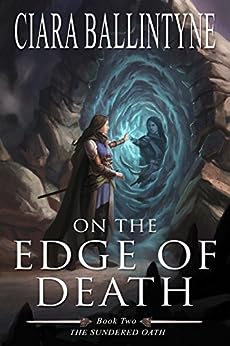 When an evil necromancer threatens all she loves, Ellaeva must risk her sanity to face down the darkness within her soul.

All the Left Hand of Death wants is something to call her own, but is the price too high?

Ellaeva, the fated avatar of the death goddess, is desperate to track down her missing family but the trail is decades old. Instead, she discovers her battered and bloodied sister priestesses driven across the Jerreki border on pain of death. Ellaeva must turn aside from her personal quest to investigate the murders, only to find her parents have been taken into the heart of the conflict.

Lyram Aharris, favoured son of the royal line of Ahlleyn, is the only living person she trusts to help her infiltrate the enemy stronghold and uproot the horror they find there, but their chequered past threatens the mission. Accompanying him is his crown prince, the one man Lyram wants dead above all others.

Now Ellaeva must face down the darkness in her soul before a dark god is brought into the world.

At the boundary of life and death, all oaths will be tested.

ON THE EDGE OF DEATH by Ciara Ballintyne

AUTHOR: Ciara Ballintyne holds degrees in law and accounting, and is a practising financial services lawyer. In her spare time, she speculates about taking over the world - how hard can it really be? If she could be anything, she'd choose a dragon, but if she's honest she shares more in common with Dr. Gregory House of House M.D. - both the good and the bad. She is a browncoat, a saltgunner, a Whedonite, a Sherlockian, a Ringer and a Whovian... OK, most major geek fandoms. Her alignment is chaotic good. She's an INTJ. Ciara lives in Sydney, Australia, with her husband, two daughters, and a growing menagerie of animals that unfortunately includes no dragons.

EDITOR: Marissa loves falling into a story and just going along for the ride, but she also loves capturing a story and examining it like a naturalist would, trying to figure out what makes it tick and how it turned out so beautiful. She started out editing National Geographic books, and has been editing full time for over five years now, working on all genres but specializing in science fiction and fantasy. She loves her job more all the time. Being able to help storytellers bring their ideas to life and seeing them grow as artists is incredibly rewarding. --This text refers to the paperback edition.

Ciara Ballintyne was born in 1981 in Sydney, Australia, where she lives with her husband, two daughters, one masochistic cat, and one cat with a god complex. She holds degrees in law and accounting, and has been a practising financial services lawyer since 2004. She is both an idealist and a cynic.

She started reading epic fantasy at the age of nine, when she kidnapped Castle of Wizardry by David Eddings from her father. Another two years passed before she began her first attempts at the craft of writing. Confronting the Demon is her debut book.

She enjoys horse-riding, and speculation about taking over the world. If she could choose to be anything it would be a dragon, but instead she shares more in common with Dr. Gregory House of House. M.D.

Mainer
5.0 out of 5 stars Great fantasy series.
Reviewed in the United States on 22 June 2017
Verified Purchase
Ellaeva, the battle priestess, is on a quest to enter Jerreki, a land where the rulers have been killing and driving out her fellow priestesses. Turned back at the border, she asks the king of Ahlleyn to send her in secret as part of an embassy that includes Lyram Aharris, a man from her past as well as the hated Prince Drault and the Duchess Narrawen. What they find in Jerreki is unspeakable evil, and Ellaeva and Lyram must put duty and justice above love in order to prevail.
This is the second book in The Sundered Oath series. I didn't read the first book, though I intend to remedy that omission, I felt I picked up the story and the characters very easily. The author weaves the backstory into the narrative seamlessly, no data dump here. In fact, the writing is quite brilliant; the descriptions give an excellent description of the world and people while not being overly verbose. There's a lot of battle scenes and fighting which I sometimes get bored with, but they drew me in, and I could almost see each parry and thrust. Drault is a wonderful villain, not over the top, but still capable of great evil. Narrawen's character is more subtle, but I disliked her just as much as Drault by the end of the book. And neither of them is the true enemy.
Ellaeva and Lyram are heroes in the true sense of the word. Both have lost much and want so much more, but let the needs of others and their own senses of duty override their love. I can't wait for the next book in this series and I will definitely find some more of Ms. Ballintyne's books. A truly great fantasy series. I received a copy from the author to reivew, but then bought my copy because I liked it so much.
Read more
Report abuse
See all reviews
Back to top
Get to Know Us
Make Money with Us
Let Us Help You
And don't forget:
© 1996-2021, Amazon.com, Inc. or its affiliates