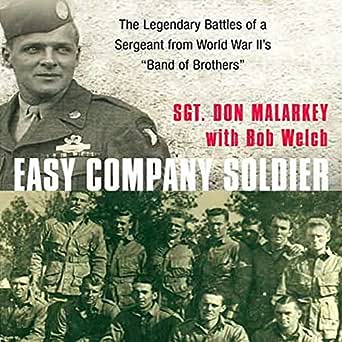 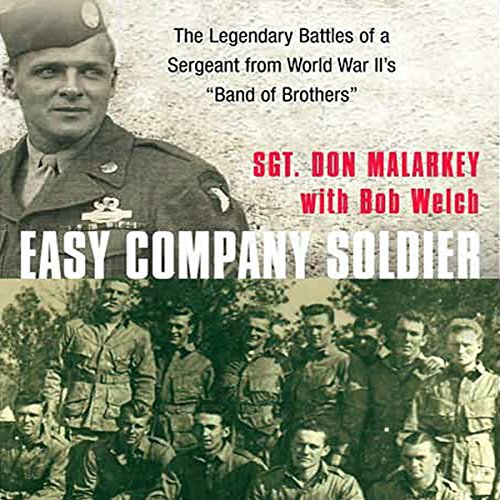 Easy Company Soldier: The Legendary Battles of a Sergeant from WW II's 'Band of Brothers'

Easy Company Soldier: The Legendary Battles of a Sergeant from WW II's 'Band of Brothers'
Don Malarkey (Author), John Bedford Lloyd (Narrator), Bob Welch (Author)
Get this audiobook plus a second, free. Audible is $16.45 for 1 credit/mo after 30 days. Cancel anytime.

South Saxon
5.0 out of 5 stars Excellent
Reviewed in the United Kingdom on 20 July 2019
Verified Purchase
To use a cliche, this is a story about an ordinary man called upon to do extraordinary things. It is well written and engaging - you’ll want to keep reading. Set in the context of life before and after war it gives a detailed account of the transition from young civilian looking forward to a normal life to a combat hardened veteran who then has to abruptly return to being a peacetime civilian. This is an honest account of the reality of training for and then engaging with the enemy at close quarters; how soldiers (in this case parachute infantry) bond and deal with the loss of brothers-in-arms; leadership under the direst of conditions and all within the all embracing military system. The impact of a relatively short period of war in a long life is clear; coping with war never ends and is an integral part of coping with peace. As, no doubt, those who have served in recent wars such as Iraq and Afghan will also testify.
Read more
2 people found this helpful
Helpful
Sending feedback...
Thank you for your feedback.
Sorry, we failed to record your vote. Please try again
Report abuse

Richard
4.0 out of 5 stars A life not ordinary
Reviewed in the United Kingdom on 30 November 2017
Verified Purchase
I had the luck of visiting Bastogne in September 2017, it was a whistle stop visit en route to a holiday destination.
It was exactly 1 week before Sgt Malarkey passed away.
I'd seen "Band of Brothers" and read the book, but I hadn't expected the affect that the story would have on me.
Sgt Malarkey has given a frank and honest account of his life, the book opens the door to the horrors of war and also shows us that all though live goes on, post war, through his personal strength he found his peace.
It is a slice of one individual life, that I'm glad I took the time to read about.
Thank you Sgt, may you rest easy in the company of heroes, and they in the company of one too.

milliemumof7
5.0 out of 5 stars Very touching WWII memoirs
Reviewed in the United Kingdom on 10 August 2009
Verified Purchase
I have read many books on Ambrose's "Band of Brothers'" soldiers and their Easy company, 101st Airborne. This is the best memoir of the lot. I am a historian but the battles of WWII is not really what interest me. It's the thoughts of the soliders that hold my interest, their backgrounds, the friendships that they form, the bonds, how they survive loosing their best friends, survive fear, cold, hunger. THIS books tells it all. No other book on WWII has had me in tears. Tears of laughter and tears of sadness. I felt Sgt. Don Malarkey's pain. He lost his best friend in Bastogne and that pain moves like a red thread through the book. Sgt. Malarkey stands out as true hero with faults, blemishes yes, but also a character of seldom seen proportions. I am so impressed by this man. The book really reminds you of that these men that we today see as old veterans and heroes, were not old during WWII. They were children that had to put aside dating, school, fun and games, and fight an evil that was threatening to take over the world. Our fate today was in the hands of 18 year old boys and girls which is something that we do not really think about. If one has seen the TV series "Band of Brothers", one really ought to read this book. It sets you straight on some mistakes that crept in to the TV series. But also, in a TV show it is difficult to show what each individual sees on the battlefield and especially how he feels. This book gives so much more than the TV series. It shows what a soldier's life was really like during WWII, including of course the worry about "folks" at home and the girlfriend that was not writing often enough. The book does not end with the year 1945 either but continues his story and shows that medals are nice but does little for you when you get home and have to go back to "normal" life again. The war memories will leave him in no peace to this day. And life did not quite turn out the way he or anyone of his "brothers" dreamt in the cold foxholes, dreaming about home and the girls waiting there. After reading the book, I wanted to look this man up and just give him a big, big hug, that is how touching his story is.
Read more
29 people found this helpful
Helpful
Sending feedback...
Thank you for your feedback.
Sorry, we failed to record your vote. Please try again
Report abuse

Stephen McAteer
4.0 out of 5 stars Excellent
Reviewed in the United Kingdom on 24 March 2019
Verified Purchase
A ground-level account of what iti was like to be an infantryman in WWII. Malarky served from D-Day till the end of the war. This is well-written and easy on the brain. There's some background on what he did before the war too.
Read more
2 people found this helpful
Helpful
Sending feedback...
Thank you for your feedback.
Sorry, we failed to record your vote. Please try again
Report abuse

J A Dobbelaar
5.0 out of 5 stars Read it! A real soldiers experience.
Reviewed in the United Kingdom on 24 October 2017
Verified Purchase
An absolute fantastic book. What these guys went through not only in the war, but the mental scars they were left with of their experiences after the war. Having been to Bastogne you cannot imagine how it was. The museum there gives you only an idea and that is bad enough. Thank you Don for letting me share your experience of this terrible war.
Read more
One person found this helpful
Helpful
Sending feedback...
Thank you for your feedback.
Sorry, we failed to record your vote. Please try again
Report abuse
Load more international reviews

paul h
3.0 out of 5 stars Not bad
Reviewed in the United Kingdom on 26 February 2019
Verified Purchase
Ok but don't add much new to the easy company story.
Read more
One person found this helpful
Helpful
Sending feedback...
Thank you for your feedback.
Sorry, we failed to record your vote. Please try again
Report abuse

anthony
5.0 out of 5 stars This is a superb book
Reviewed in the United Kingdom on 11 July 2012
Verified Purchase
Yes this is a superb read.It gives an insight into the time that made the young man that filled the uniform so well, as ofcourse did so many other young men. It also answers some of the questions raised by the "band of brothers" book.After the war the book gives a flavour of how life for him had changed, and how he and some other vets coped with the changes.Once i picked this book up i couldnt put it down.
Read more
Helpful
Sending feedback...
Thank you for your feedback.
Sorry, we failed to record your vote. Please try again
Report abuse

Kyle Motte
5.0 out of 5 stars A good read
Reviewed in the United Kingdom on 3 October 2018
Verified Purchase
I have read and watched band of brothers but it was great to read an individuals account of being in easy company. Definitely worth a read if you have read band of brothers.
Read more
Helpful
Sending feedback...
Thank you for your feedback.
Sorry, we failed to record your vote. Please try again
Report abuse

Mr. Ric Dumbleton
5.0 out of 5 stars Outstanding
Reviewed in the United Kingdom on 17 July 2016
Verified Purchase
This is a brilliantly written book , the story of an outstanding soldier and more importantly a man of integrity. Takes you back to the war almost as if it was yesterday. Everyone should read it.
Read more
Helpful
Sending feedback...
Thank you for your feedback.
Sorry, we failed to record your vote. Please try again
Report abuse

Mr H.
5.0 out of 5 stars Amazing
Reviewed in the United Kingdom on 14 June 2019
Verified Purchase
Having read band of brothers I wanted to get the individuals point of view on the war. Certainly recommend this book
Read more
Helpful
Sending feedback...
Thank you for your feedback.
Sorry, we failed to record your vote. Please try again
Report abuse

Lizzy
5.0 out of 5 stars Five Stars
Reviewed in the United Kingdom on 10 January 2018
Verified Purchase
Bought this for my husband and he could not put it down !
Read more
Helpful
Sending feedback...
Thank you for your feedback.
Sorry, we failed to record your vote. Please try again
Report abuse