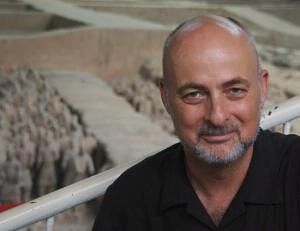 by David Brin (Author)
4.2 out of 5 stars 136 ratings
See all formats and editions
Sorry, there was a problem loading this page. Try again.

"The Moby Dick of the whole Earth movement."--Locus

David Brin is a scientist and the bestselling author of Sundiver, The Uplift War, Startide Rising, The Practice Effect, The Postman, Heart of the Comet (with Gregory Benford), Earth, Glory Season, Brightness Reef, and Infinity's Shore, as well as the short-story collections The River of Time and Otherness. He has a doctorate in astrophysics and has been a NASA consultant and a physics professor.
Start reading Earth on your Kindle in under a minute.

David Brin is a scientist, public speaker and world-known author. His novels have been New York Times Bestsellers, winning multiple Hugo, Nebula and other awards. At least a dozen have been translated into more than twenty languages.

David's latest novel - Existence - is set forty years ahead, in a near future when human survival seems to teeter along not just on one tightrope, but dozens, with as many hopeful trends and breakthroughs as dangers... a world we already see ahead. Only one day an astronaut snares a small, crystalline object from space. It appears to contain a message, even visitors within. Peeling back layer after layer of motives and secrets may offer opportunities, or deadly peril.

David's non-fiction book -- The Transparent Society: Will Technology Make Us Choose Between Freedom and Privacy? -- deals with secrecy in the modern world. It won the Freedom of Speech Award from the American Library Association.

A 1998 movie, directed by Kevin Costner, was loosely based on his post-apocalyptic novel, The Postman. Brin's 1989 ecological thriller - Earth - foreshadowed global warming, cyberwarfare and near-future trends such as the World Wide Web. David's novel Kiln People has been called a book of ideas disguised as a fast-moving and fun noir detective story, set in a future when new technology enables people to physically be in more than two places at once. A hardcover graphic novel The Life Eaters explored alternate outcomes to WWII, winning nominations and high praise.

Brin serves on advisory committees dealing with subjects as diverse as national defense and homeland security, astronomy and space exploration, SETI and nanotechnology, future/prediction and philanthropy.

As a public speaker, Brin shares unique insights -- serious and humorous -- about ways that changing technology may affect our future lives. He appears frequently on TV, including several episodes of "The Universe" and History Channel's "Life After People." He also was a regular cast member on "The ArciTECHS."

Brin's scientific work covers an eclectic range of topics, from astronautics, astronomy, and optics to alternative dispute resolution and the role of neoteny in human evolution. His Ph.D in Physics from UCSD - the University of California at San Diego (the lab of nobelist Hannes Alfven) - followed a masters in optics and an undergraduate degree in astrophysics from Caltech. He was a postdoctoral fellow at the California Space Institute. His technical patents directly confront some of the faults of old-fashioned screen-based interaction, aiming to improve the way human beings converse online.

Brin lives in San Diego County with his wife and three children.

4.2 out of 5 stars
4.2 out of 5
136 global ratings
How are ratings calculated?
To calculate the overall star rating and percentage breakdown by star, we don’t use a simple average. Instead, our system considers things like how recent a review is and if the reviewer bought the item on Amazon. It also analyses reviews to verify trustworthiness.

Djgos
2.0 out of 5 stars TERRIBLE!
Reviewed in the United Kingdom on 9 June 2021
Verified Purchase
Oh, I'm so disappointed by this rambling, overstuffed effort. I lost the will to live half way through but had to find out what happened, so ploughed on often discarding swathes of chaff.

It feels wrong to so criticise a writer who attempts to incorporate this much science and speculation in a book. Yet that's the core issue I have with it - that he shows no restraint, that he/his editors didn't say "stop" and cull his precocious use of arcane words - that he uses so many storylines some of which add very little if anything to the book - hat he stretches credibility (and this Speculative fiction!) with Atlantis flying, the Ark going into space, the perfect nature of his protagonists, etc, etc.....

Simon R. Williams
3.0 out of 5 stars Ok but neither as prophetic or punchy as promised
Reviewed in the United Kingdom on 12 February 2015
Verified Purchase
Found this pretty hard work to keep my interest going. Looking back and reading the afterword it clicked. David refers to a huge amount of influences and ideas from other sources. This novel tacks them all together and also has interjections and narrative that i eventually wound up skim reading as many had no place in the narrative and felt like 'fillers'. This also led to characters being bit part players with zero intellectual involvement with their story - i didn't care if they lived or died. I became more interested by how the book was put together than the story. Also it got exciting in only the last 50 pages which is always an issue. Ok but as a lifelong fan of the genre this was one of the few books that i considered stopping reading but finished and was glad it was all over by the end.
Read more
One person found this helpful
Report abuse

Amazon Customer
5.0 out of 5 stars A truly great read
Reviewed in the United Kingdom on 7 March 2012
Verified Purchase
A truly great book I replaced a badly damaged paperback with the kindle edition as soon as I saw it had been released. I'd heartily recommend it to anyone with an interest in near future SF. The picture it paints of a damaged world and the struggle to avert one global catastrophy while amid another is vivid as it is disturbing.
Read more
Report abuse

However, the Kindle version is chock-full of transcription errors and mistakes in what I assume is an OCR-scanned edition. It really really should have at least been proof-read before being released in eBook format. Please correct this (or pay me to do it for you) and re-release.
Read more
Report abuse

Mick L.
5.0 out of 5 stars Five Stars
Reviewed in the United Kingdom on 25 September 2017
Verified Purchase
Superb and prophetic hard science fiction
Read more
Report abuse
See all reviews
Back to top
Get to Know Us
Make Money with Us
Let Us Help You
And don't forget:
© 1996-2021, Amazon.com, Inc. or its affiliates