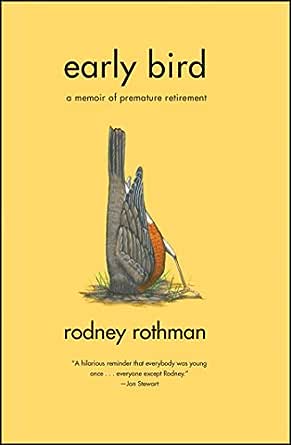 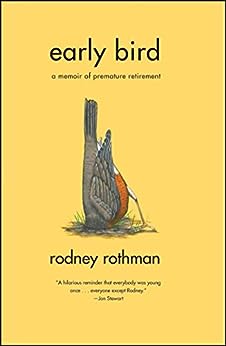 "A hilarious reminder that everybody was young once . . . everyone except Rodney." -- Jon Stewart

"A hilarious account of moving into a Florida retirement community at age twenty-eight. . . . Rodney Rothman's premise is so silly and fetching . . . sections had me hooting so hard that I thought the neighbors would be over to check on me." -- Karen Long, The Plain Dealer (Cleveland)

"[Rothman] has produced a warm, wry bit of reportage. . . . His descriptions of the loneliness, the cliquishness, the slow-motion desperation of the place ring true and bittersweet." -- Neil Genzlinger, The New York Times Book Review

"It's hilarious. It's one of the best books I've read. If you're looking for a book, get this one." -- Howard Stern

"Rothman's observations are insightful and clever -- a humorous, Generation X perspective on what baby boomers are about to discover." -- Rocky Mountain News

"This book, which has a pretty silly premise, quickly and thoroughly becomes something much more: it's actually emotionally involving, and even profound. It's very funny, because Rothman is always very funny, but it's also truly moving, and, at its core, unspeakably sad. That's not to say it isn't fun to read. It is. It is!" -- Dave Eggers

"Old-fashioned retirement at age twenty-eight? Funny -- sure. But Rothman is also riveting, friendly, and the good kind of sad." -- Sarah Vowell, author of Assassination Vacation

"A hilarious memoir . . . David Sedaris fans, this one's for you." -- Daryl Chen, Glamour --This text refers to an out of print or unavailable edition of this title.

Rodney Rothman is now living in Los Angeles. He is a former head writer for the Late Show with David Letterman, and was a writer and supervising producer for the television show Undeclared. His writing has appeared in the The New York Times, the New York Times Magazine, the Best American Nonrequired Reading, The New Yorker, McSweeney's Quarterly, and Men's Journal. --This text refers to an out of print or unavailable edition of this title.

Harvey N in FL
2.0 out of 5 stars funny but so so
Reviewed in the United States on 30 May 2005
Verified Purchase
This book should not be taken too seriously. It is laugh out loud funny at times, but mostly it seems pretty depressing. Not so much at the author's portrayal of the seniors, but at his lack of ability to successfully get the elderly to talk about meaningful things. He claims that they do not offer him any great wisdom of life, but whenever he does find himself in moments of seriousness, such as when he finally finds out how his roommate's spouse passed away, he is too uncomfortable to pursue them further. Alas, the lack of depth he finds in seniors is not a reflection of those whom he meets, but of himself. But then again, what would you expect from a comedy writer who must constantly attempt to discover the absurd? It is a shame that Mr. Rothman did not have the courage to set aside his silliness at times; it would have given this work a whole new dimension.
Read more
20 people found this helpful
Report abuse

J. A. L
2.0 out of 5 stars A snoozer
Reviewed in the United States on 1 September 2016
Verified Purchase
Nothing revealing here. If you've ever had contact with retired people and retired communities you'll already know what the Author learns. The book is really pretty boring. I don't understand the fuss and would NOT recommend it.
Read more
Report abuse

C. Davidson
3.0 out of 5 stars Making Old Age Funny
Reviewed in the United States on 6 August 2005
Verified Purchase
This is a funny premise, that of a young man moving into a retirement community and writing about life among old people. The book, at the beginning especially, is a riot, and Rothman nails elderly folks and their eccentricities perfectly. Into this, though, creeps sadness and poignancy - aging is not fun, and the "Golden Years" are tarnished in many ways. Rothman weaves this element of retirement into the story, and does so smoothly.

Some reviewers mentioned that the characters are stereotyped. They are, I agree, but I have found that the elderly often share the exact qualities Rothman's characters exhibit, especially when living among others of the same age. How about the"cliquish" behavior of the ladies at the pool? The power control attitude of the fellows at shuffleboard?

I have given this book three stars because I don't think Rothman had enough material for a novel and resorted to padding to extend his story. The lengthy chapters on shuffleboard almost bring the book to a full stop. This story would have been perfect as a piece in The New Yorker or Harper's. That said, it's fun to read and provides one with some laughs and also some sensitivity to what it is like to grow old.
Read more
3 people found this helpful
Report abuse

Marie Celestino
3.0 out of 5 stars Three Stars
Reviewed in the United States on 16 March 2018
Verified Purchase
Slow moving, but getting into it more half way through.
Read more
Report abuse
See all reviews
Get FREE delivery with Amazon Prime
Prime members enjoy FREE Delivery and exclusive access to movies, TV shows, music, Kindle e-books, Twitch Prime, and more.
> Get Started
Back to top
Get to Know Us
Make Money with Us
Let Us Help You
And don't forget:
© 1996-2020, Amazon.com, Inc. or its affiliates