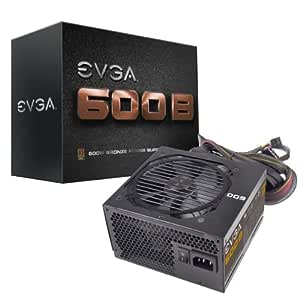 Capacity: 600W | Style: B1
Expand all Collapse all Technical Details
Expand
Other Technical Details
Warranty & Support
Amazon.com.au Return Policy: You may return for a full refund for the price you paid within 30 days of delivery any new computer purchased from Amazon that is "dead on arrival", arrives in damaged condition or is still in unopened boxes. Amazon may test or inspect returns. If Amazon finds a customer has misrepresented the condition of a return, Amazon may impose a fee equal to up to 15 percent of the merchandise sales price. Any returned computer that is damaged through customer misuse, missing parts, or in unsellable condition… Read more due to customer tampering may result in the customer being charged a restocking fee based on the condition of the computer. This policy does not restrict or alter any non-excludable statutory consumer protections or rights you may have, including under the Australian Consumer Law. To view full returns terms including return instructions, merchandise-specific requirements and exclusions see our Returns Policy Page. New, used, and refurbished products purchased from Marketplace vendors are subject to the returns policy of the individual vendor.

Capacity: 600W | Style: B1
With price and performance in mind, the EVGA 600B is the best value power supply for your next build on a budget. With 80 Plus Bronze standard, over 80% efficiency under typical loads, the EVGA 600B is a great choice. Combining 600W of continuous power and Single +12V High AMP rail design, gain maximum power and efficiency while staying protected with a series of multiple safety protections all bundled into one!

I decided to open this Evga 450BT and check is circuited, I was surprised by what I found.

The unit uses common forward topology (check this out in order to understand this review better).

Moving on we have 4 Class X2 caps and 7 class Y caps, a bit overkill, we also have 2 common mode inductors at the input, this is for EMI suppression, we also have a varistor after the fuse, (can't read its rating as it is inside a heatshrink, although it is very likely 275V AC), what this does it that if the mains voltage gets too high, the varistor shorts the mains and opens the fuse,

Now we get to the main bridge rectifier, it has no printing on front, this is really odd (it might be facing the heatsink), however it isn't much to worry about, the high voltage side of these PSU's operates with low currents.

After the rectifier we have a 0.47uF polypropylene cap (again more EMI protection), along with the main filter cap, which is a 400V 270 uF teapo cap rated for 105 degrees, the main cap comes after a relay and a thermisistor, the thermisistor is there in order to reduce the high start current of the main capacitor, there's also a huge inductor used for the active PFC.

The main switching transistors and the PFC transistor are 5R280CE, these are also with the bridge rectifier heatsink and are rated for 11 Amps are 100 degree centigrade,

So almost all rails have their own pi filter. This is essential to keep ripple as low as possible.

The output wires are all black, 18 gauge and rated for 80 degrees.

Overall the unit is very good ans should be perfectly capable of delivering its rated wattage, and even a bit more depending of how the over current protection is tweaked. The level of overkill of this unit is something you would expect of a unit worth several times the value of this one.

Edit: The main bridge rectifier is a GBU806 (had to remove the heatsink), nice.

Edit2: The varistor is a 10D561K, not the right part for this, it's clamping voltage is well beyond of what the GBU806 can take. They should have used a 10D431K instead.

Edit3: I had one unit die. Almost all diodes at the secondary failed short, and there was damage to the relay circuit at the primary side. Really odd.

Edit4: Fixed it. I still don't know what caused the diodes to die, I suspect that since this unit lacks OTP, was in a really hot place (ambient temp gets as high as 37 degrees centigrade very often here) with not much airflow for its fan, was running a PC with one RX480 and one GTX1060 mining 24/7, and that the unit controls the fan speed (likely uses the voltage drop across the shunts as reference for the fan speed). The diodes likely degraded because they were too hot and the fan was not maxed out.

I also had replace a transistor at the primary side that turns the unit on, Apparently the unit suffers a hysteresis issue, when it failed I could hear the relay switching rapidly. The transistor is an NPN one with a Y1 mark on top of it. The transistor had a 16V zener diode next to it that also failed.

Edit5: There's an NTC next to the secondary heatsink (was hidden by some black glue) that controls de fan speed, and it isn't working, I hit it wit the soldering iron and the fan speed doesn't change in the sightless. That explains it all, that fan always ran at minimum speed.

Guram Khurtsidze
1.0 out of 5 stars 2 Weeks and it's dead
30 January 2019 - Published on Amazon.com
Verified Purchase
Hi,
I bought this product (EVGA 650 BQ, 80+ BRONZE 650W) after using it 2 weeks, computer wont torn on. After diagnose my PC in certified service center resolution was “power supply is damaged”. After that I contacted EVGA and after a month of communication and sending more than 12 mails finally got RMA (Return Merchandise Authorization), but there was a catch.
To get product fixed or get replaced I must send it to Germany. I live in Republic of Georgia and sending power supply to Germany will cost more than power supply itself.

Don’t by products from EVGA it isn’t reliable and in case of problem you will grow old to get RMA . In case if you are lucky to get RMA shipping will cost more than product you bought.

Jake Socks
1.0 out of 5 stars Biggest joke of a psu I seen in 20 yrs
30 November 2018 - Published on Amazon.com
Verified Purchase
You have got to be kidding me purchased this 850w to replace a 6 yr old 1000w cooler master that was still working fine. Only to get it and realize what a huge piece of junk this is.
1 the 8 pin CPU is extremely short. Took me nearly half an hour to rig it to reach my 8 pin which is located directly beside the rear grommet. The dual 4 pin for the CPU DO NOT connect together so getting them both in with such a short cable was beyond frustrating. However the biggest issue is NO PROPER 8 PIN GPU CONNECTORS !!! They give u 3 dual connectors but they are all 8+6 pin. So I cant even wire up my 1080 without having hideous 6 pins dangling. Extremely disappointed.
On the bright side I purchased this psu to use cable mod cables so I will be throwing the stock evga cables where they belong. In the trash.
Read more
45 people found this helpful

Chris
1.0 out of 5 stars Worked for a few hours!
15 September 2017 - Published on Amazon.com
Verified Purchase
When I buy an item on Amazon the selling point is the reviews. This has decent reviews out of 5 stars so it must be good. Wrong. I build PCs and this is not my first rodeo so I know what I am doing. It worked for an hour before my computer shut off. Thinking it was Software related I just re-booted to find the case fan flicker on and off. Ok so its a loose connection, after a couple minutes checking all cables I tested the power supply voltage. Way out of line to where 12 or 5 volt devices need. Since most of the computer is Corsair such as the case, liquid cooler, RAM, case fans, ect i will spend the extra money for it. You have been warned. Any sign of fluctuating voltage dont think twice, return it! Thanks to Amazons amazing return policy its being ship back as we speak!
Read more
51 people found this helpful

Carlos Garcia CCS-400097
4.0 out of 5 stars Great response -time and hepfulness,to pre-install questions by EVGA tech support (phone and email). Very easy to install.
21 May 2018 - Published on Amazon.com
Verified Purchase
First of all and very important to me (as not to fry my MOBO and components): Great response -timely and helpful by phone and email, from EVGA tech support to my pre-installation, MOBO specific questions.

Easy to install. A lot less cable clutter inside the case (Thanks to modular cables). I like the fact that it came with a PSU testing tool - simple bridged 24 pin male connector, emulating that on the MOBO that you plug onto the corresponding ATX (20 + 4) pin cable and test the PSU before installing it. It is a simple test: the fan in the PSU either starts or doesn't when, connected to the AC power outlet, the PSU switch is set to ON. Mine was good. Its already installed and works perfectly.

I'm taking out a star because even though the packaging came undamaged and in perfect outside condition, one of the prongs on the power cable plug arrived bent (see pictures). Without damage on the packaging it means that the cable wasn't properly checked during package assembly at factory. However It took a set of pliers and a careful - gentle twist to set it straight again and, as explained, pre-installation test showed a working product. So, no big deal, but a call to attention at quality control during packaging. It is said that "the devil is in the details".
Read more

30 people found this helpful
Go to Amazon.com to see all 3,957 reviews 4.3 out of 5 stars
Get FREE delivery with Amazon Prime
Prime members enjoy FREE Delivery and exclusive access to movies, TV shows, music, Kindle e-books, Twitch Prime, and more.
> Get Started
Back to top
Get to Know Us
Make Money with Us
Let Us Help You
And don't forget:
© 1996-2020, Amazon.com, Inc. or its affiliates