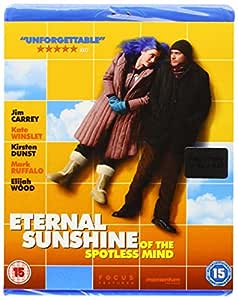 Eternal Sunshine of the Spotle

Charlie Kaufman, writer of the cult film 'Being John Malkovich', returns with another mind-bendingly inventive and unconventional plotline, this time driving a tender romantic comedy.Jim Carrey stars as Joel, a shy oddball who is stunned to discover that his longterm girlfriend Clementine (Kate Winslet), with whom he has recently split up, has undergone an experimental psychiatric treatment to have her memories of their tumultuous relationship erased.Still in love with her, and frustrated at the thought that she has no memory of their times together, he elects to undergo the procedure himself, and contacts the company who have pioneered it.The team, led by Dr Howard Mierzwaik (Tom Wilkinson), hook Joel up their computer and begin the process.The film, the majority of which takes place inside Joel's mind, then follows each of his memories of Clementine back in time as the most recent ones are systematically erased.But Joel's subconscious struggles to hold on to the memories as they slip away, and one of the nurses, Mary (Kirsten Dunst), who has undergone the treatment herself, sees his distress and eventually decides to send Joel and Clementine their files so that they know what they have lost.
Technical Specs: * Interactive Menu

bernie (xyzzy)
TOP 500 REVIEWER
2.0 out of 5 stars Pretty much a waste of time
5 September 2019
Format: Blu-ray
Clementine Kruczynski (Kate Winslet) is disenchanted with her latest beau and has a procedure to erase her memory of him. Her now ex Joel Barish (Jim Carrey…that gets to make Carry faces) finds out and decides to reciprocate. Things do not go as well as planned as the processing team is full of highjinx.

The concept is probably good however the actors are mismatched and the timing is off.

I would like to tell you more but I am afraid I had this movie erased from my mind and hope with the low rating that I do not try and see it again.

However I guess “Everybody’s got to Learn Sometime” written by James Warren.

Matthew D'Souza
5.0 out of 5 stars Cherish Your Memories
15 September 2017 - Published on Amazon.com
Format: Blu-rayVerified Purchase
Jim Carrey's finest dramatic performance. He portrays Joel, a depressed and lonely man, who meets Clementine. She is a wondrous light in his mundane life of work and not work. Carrey is the ultimate empathetic every man in this film. You want him to be happy. Kate Winslet gives her famous "manic pixie dream girl" performance as Clementine. I found her at first hyperactive, then so very human as it's slowly apparent how insecure she is with her own life. Their chemistry seems off at first, but you realize they are perfect strangers in this lovely movie.

Eternal Sunshine of the Spotless Mind captures our feelings in a moment. Charlie Kaufman's script is an appeal to human emotion and empathy as any film I have ever been lucky enough to have seen. How precious are memories? Do they define us? Is our life just a sequencing of memories? I believe Eternal Sunshine asks that we cherish our memories as they are the remembrances of what we have lived. Remember your love and appreciate what you have. Make memories.

Aside from the main themes and morale of the movie, the supporting cast is incredibly strong and subtle. Elijiah Wood is an obsessed man derailing the lives of those around him. He is as creepy as he was in Sin City, but with a subtle flair of subdued insanity. Mark Ruffalo is hilarious and goofy as the lovable mad scientist. I used to find his so ordinary in his acting, but here, Ruffalo is so relatable and interesting. He's a joy to watch and you really feel for him by the end. Tom Wilkinson is the calm and well mannered genius who profession is the erasure of dreams. I think it's evident by the end that his character is trying to escape his emotions just as much as any of his patients. Finally, my personal favorite, Kirsten Dunst as Mary. She is so charming and sweet. She plays the fun loving Mary, whose secret changes the way people feel forever. Dunst plays the profoundly sad girl you love so very well. She is enchanting on screen and you cannot help, but sympathize for her character. Mary's story is perhaps the saddest of all the character arcs in Eternal Sunshine.

It must be noted, Eternal Sunshine of the Spotless Mind has, perhaps, the most astoundingly seamless film edits of any movie ever. Every time a scene shifts or transitions from scene to scene or to another location, you are stunned by the forced perspectives and hard cuts. It's so well done and obvious that each cut, angle, and frame is purposefully edited to perfection. This movie is visual euphoria. Absolutely immaculate editing, gorgeous cinematography, and superbly refined directing from Michel Gondry. Gondry's direction marks a true show of film making prowess. The deliberate manipulation of the audience through his magical framework is awe inspiring.

I hope you watch Eternal Sunshine of the Spotless Mind. I think it will make for a pleasant memory.
Read more
38 people found this helpful

Donald H.
4.0 out of 5 stars A romantic couple and how they complement and make the other whole
23 April 2016 - Published on Amazon.com
Verified Purchase
Clementine Kruczynski, aka Tangerine (Kate Winslet) is fearless and uninhibited when it comes to latching on to her new beau, Joel Barish (Jim Carrey). She acts like someone who is on the rebound from a sudden, broken relationship. The way they coalesce (hook up) is almost to good to be true. Joel sees her as exciting, flashy, and a lot of fun, a riot. She is a risk taker and an adrenaline driven thrill seeker that takes Joel on a wild ride and out of his comfort zone. She proposed marriage and after a few days exclaimed she wanted to have a baby. Joel, nonplussed, is more responsible and reasonable than the impulsive, high-maintenance Clementine, and he feels he is in over his head. He goes to a hypnotherapist to expunge her from his memory, so he can move on and get his life back. At some point, he has second thoughts about erasing and removing their blooming friendship from his memory. There's a tug-of-war between the doctor who is contractually bound to carry out the procedure and Joel, who wants to preserve and hold on to this meaningful relationship. It becomes a race against the clock between these two opposing forces - the doctor trying to clear and create a tabula rasa (spotless mind) and Joel trying to keep fond memories of Clementine ever present. The use of a EEG - CAT scan to measure and record the process of selective memory eradication added an element of realism to this sci-fi comedy. What if this neurological capability was within the realm of medical science! If I could digress into a particular scene, they are laying supine on frozen Lake Montauk in N.Y. Looking up at the night sky, he pointed out the sword and belt of Orion, which he didn't know by name, and told her it was "Osidius the Emphatic" constellation. Huh? He made that up off the top of his head to impress her. The storyline is original and more complicated than this brief review describes. Although Kate Winslet naturally speaks with a British accent, you would think she was an American from her speaking to her extraordinary acting.
Read more
10 people found this helpful

Scott FS
5.0 out of 5 stars I watched it four times. It's more enjoyable the more you watch it.
9 May 2019 - Published on Amazon.com
Verified Purchase
We watched this in my Film criticism class. I chose to write my midterm on it. I had to watch it multiple times. I paid I think three or four bucks on Prime each time. I finally just bough the thing.

Jim Carrey is very, very good in this film. He plays serious this time, and sort of confused serious. He's really good. And Kate Winslet is also very good. The story is sound, but the first time I watched it, I was somewhat confused. It took a second viewing to really understand it. The third and fourth viewing enhanced my understanding.

There are a few plot holes in my opinion, but nothing that ruins the film for me. In fact, I really, really liked it.

John
5.0 out of 5 stars Absolutely Stunning. Mind Blowing truly a word to describe this movie. Magical.
24 November 2015 - Published on Amazon.com
Verified Purchase
If you liked "Adaptation"...you'll love this too.

So few movies are truly original. It's an old story..Boy Meets girl, Boy loses girl (watch their relationship disintegrate before your very eyes!) Does boy want girl back? I don't know if you can call their relationship love. But decide for yourself.

Each scene is a mini-masterpiece in itself. You don't even recognize Jim Carey. What a sad sack, lost...wandering...clueless but wanting love so badly. And his counterpoint in love...absorbing and vile in many ways. But it works so well.

And the way it's filmed...the visual twists and disintegration of life, and houses and memories. Magical.

If you don't like "complicated" movies...avoid at all costs. But if you recognize original and magical...this could become one of those you can keep in your pocket and pull out when you want to be dazzled. If you like this, watch Adaptation too.
Read more
9 people found this helpful
Go to Amazon.com to see all 1,709 reviews 4.0 out of 5 stars