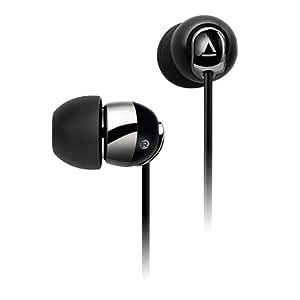 by CREATIVE
3.4 out of 5 stars 92 ratings
Currently unavailable.
We don't know when or if this item will be back in stock.

Freedom Preacher
5.0 out of 5 stars THIS is the review that you need to read on the 660's...
28 December 2015 - Published on Amazon.com
Verified Purchase
I bought these to replace a pair of Creative in-ear phones that I'd had for 6 yrs and were discontinued as well, and I am now in my 3rd year on my original pair of these... I have owned every type of in ear headphones imaginable from Bose to Beats and everything in between. After 2 yrs of use, I left these in a bag on accident and thought I'd misplaced them. So I saw they were being discontinued and ordered 4 more pair. While they were being shipped, I found my originals (which are in my ears right now btw). Over the last year, I sold all 4 pairs to people close to me because we have all been mega impressed with the sound quality. I use mine EVERY day and sleep with them in EVERY night so that should tell you something about comfort. I am also not easy on these...I work out in them, toss and turn in them, and yank hard on them all of the time and after 3yrs of that abuse, they still function perfectly. About a year ago, I caught the cable on the mirror of my Harley and separated the flexible part of the cord from the base of the jack so it moves up and down the cord, but the wire has never come loose or been exposed or caused me the first bit of problem. Which means that these are quality built. I just ordered 5 more pair because of being discontinued, and will hold on to them in case of loss or catastrophic damage because I never want to be without them... I cannot recommend them enough. With the professional quality sound from the crisp highs to the wooferish (not muddy) lows, and the quality craftsmanship combined with durability, these are a no brainer...you can't go wrong.
I have purchased 10 pairs of these headphones for myself and others and had no complaints whatsoever. Everyone that I personally know that owns them loves them!
This is an honest review and I received no compensation whatsoever for this review.
Read more

Mark P.
4.0 out of 5 stars Fits Stupid Small Ear Canal
2 August 2014 - Published on Amazon.com
Verified Purchase
Let me start with the following: I HATE ear buds! I find them uncomfortable and irritating.
I ride a motorcycle and normally use earplugs and clip-on earphones under my helmet. I was looking for ear buds to replace both.

Now, for the review of the Creative EP-660 model ear bud.

I like these. The fit is (surprisingly) comfortable. I have these stupid small ear canals which is why I hate ear buds in general. Using the smallest (of 3 provided) rubber things, these fit well. I think another reviewer mentioned this also.

Bottom line: For $16.00, I'm going to buy another couple pair as replacements.

It's important to note, these are "noise isolating" ear buds. NOT noise canceling. These simply prevent "most" outside noise from entering your ear. I find they prevent approximately (really a guess) 2/3's of the noise ear plugs prevent. Considering, my helmet is very noisy at highway speeds, this is a lot.

Pros:
Very cheap (price).
Fits stupid small ear canal.
Sound reproduction is better than average.
Lots of bass.
Did I mention they're only $16.00?

Cons:
Mid range frequency is just OK.
Discontinued by the manufacturer. Better get them while you can!
Read more

Chris MG
5.0 out of 5 stars Phenomenal Headphones
23 July 2011 - Published on Amazon.com
Verified Purchase
I bought these because the stock headphones that came with my Creative Zen had blown. I used those headphones for almost six years and every other pair that I bought (from chain places) seemed to severely lack any serious sound structure. I would continually have to turn my Zen almost all the way up to get any real sound out of them.

These little babies are phenomenal. They are very small and come with three sizes of rubber in-ear pieces that can be swapped out.

The first thing I noticed when I first used these was the superb way they cancel outside noises. I couldn't hear anything after I slapped these in, including my wife trying to talk to me from two feet away. I had to actually take them out to hear what she was saying, and that was before I even started playing any music. The other immediate thing was the enormous range of the bass. It's not too heavy and seems just right with my Zen on "Rock" setting, but it is deep. The mid-range is loud and boisterous without being arrogant and hurtful. The midrange can get washed out if the volume is too high, but that's at the levels of hearing damage anyway. The highs seem a small bit lacking, but too much treble is annoying to me anyway and hurts my ears. I'm not an audiophile by any stretch of the imagination, but all-in-all, these are perfect for me and I'm extremely glad that I bought them. The sound is unbeatable for the price. Creative makes sound cards for computers and I believe that a company that does that must know about sounds and audio. These prove to me that I was correct in that assumption. Very pleased.

EDIT: It is now February 9th, 2013. I have now had this exact set of earbuds since July of 2011. They are still going just as strong as the day I received them. The wires have no wear on them and neither bud has blown. I am not exactly gentle with them either. The rubber covering is showing zero signs of wear and they are still very comfortable. I use these for everything. I work out and run with them on, I work on the engine in my vehicle with them on, I do dishes/housework/vacuum with them on - all with exactly zero problems. For this price, there is literally not a better deal. Maybe the 630's are similar, but I will stand by these 660's until the cows come home.

Edit #2: It is now June 8th, 2014 and these earbuds are STILL going strong. Even after the countless times they've been ripped from my ears while doing chores or cutting the grass, they still work as well as they did on the day I bought them. My wife continually yells at me that she can't talk to me while they're in, which is a testament to how well they still block outside noise. I even dunked one of them into a paint can as I was painting a wall in my new house. Took it out, ran water over it and still worked. The small rubber piece that covers the actual 3.5mm jack has started coming off, but I'll be honest, I paid $30 for these and they've lasted this long. Awesome.

Edit#3: As a response to someone who commented on my review - I'm not divorced yet and don't expect to be, so there's that. Now, on to the update regarding the product. It is now April 16th 2015, and I'm still using these earbuds. Unfortunately, I think I'm going to have to buy a new pair. Yesterday, I think the left bud finally went out. I think that's the one I accidentally dropped in the paint can a year ago (and subsequently washed it out with a healthy dose of water). I've tried to tap it and blow out any debris from the small screen, but it just appears to be dead. I'm sad, because these have gone everywhere with me, but I will certainly order a new pair.
Read more
22 people found this helpful
Go to Amazon.com to see all 92 reviews 3.4 out of 5 stars
Get FREE delivery with Amazon Prime
Prime members enjoy FREE Delivery and exclusive access to movies, TV shows, music, Kindle e-books, Twitch Prime, and more.
> Get Started
Back to top
Get to Know Us
Make Money with Us
Let Us Help You
And don't forget:
© 1996-2020, Amazon.com, Inc. or its affiliates