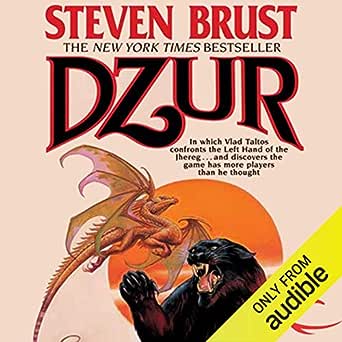 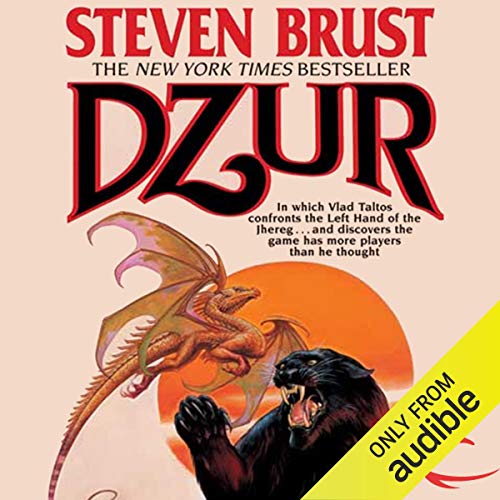 wysewomon
3.0 out of 5 stars I wanted more from this book
Reviewed in the United States on 22 August 2006
Verified Purchase
There are quite a few things to like in this, the 10th volume of Steven Brust's Vlad Taltos series. Like that it IS a book in the Vlad Taltos series. And that it takes the reader with interest in Dragaeran events one step closer to the end of a story arc that I suspect will require 8 more books. Not to mention the action and the snappy dialog.

But I felt the bill of fare was just a little too lean. In previous volumes, Brust has managed to balance action and process to a good effect. Here, I often felt left out of the loop. Several times, Vlad made connections that were never explained to my satisfaction, or said something like "the pieces fell into place," without ever saying what the pieces were or how they fit. This bothered me. Since I've never before had trouble following Vlad's reasoning, I mostly ended up feeling that information was withheld to no good purpose, except maybe to move the story along to the more active bits. But since I didn't have the information, the active bits didn't have the impact they could have.

I had a hard time understanding why Vlad got involved in the situation in the first place. This was mainly because his feelings for Cawti at this point in his history were mainly left unexplored. Several times Vlad himself, as narrator, mentioned something from his past and then declined to go into detail. This annoyed me. Even though I've read all the books in this series and understood what he was referring to, I felt hearing some of Vlad's own perspective would not have come amiss.

A couple plot devices seemed misplaced. The subplot about the Demon Goddess served mainly to distract from the main doings of the book. I got the sense of, "this is going to be relevant later and it has to go somewhere..." I wish it had had more bearing on the matter at hand. Also, as much as I enjoy seeing Kiera the Thief, her appearance in this volume seemed largely gratuitous.

Each chapter is preceded, as others have mentioned, with portions of a description of Vlad's long-awaited meal at Valabar's. Brust has used this interweaving technique to great efect before, notably in _Taltos_. Here, it seemed out of place. There was no clear connection between the meal and the rest of the story. Also, the descriptions of the food were so loving and lavish that it made the action seem rather uninteresting in comparison.

Until Chapter 15, I was a little bored by this book. After that, things started happening and got more interesting.

In the end, I was glad to read another Vlad novel, but I felt strongly that this was a book not really meant to stand alone, but best taken in context as a a transitional point of the series. As such, a reader new to the series should not start here.

Mike Garrison
3.0 out of 5 stars My dinner with Vlad
Reviewed in the United States on 13 October 2006
Verified Purchase
Remember the movie "My Dinner With Andre", where the entire movie is just two guys meeting for dinner and talking? Well, this book isn't too much different than that. In fact, it might have been better if the rest of the weak plot had been left out, since the extended dinner conversation is actually the highlight of the book.

It's not a bad book, per se. It's almost impossible for a Vlad book to be really bad. But it's easily the weakest in the series. I won't describe who Vlad is or what has brought him to this point in life, because the book will be incomprehensible anyway unless you have read most of the other books in the series. [Start with Jhereg or Taltos or perhaps even Dragon.] Dzur is, at best, simply a "where are they now" story about what has happened to the characters in Vlad's past during the time he has been wandering in exile.

The abrupt plot non-resolution was a big letdown. Of course, plot isn't really what most of these books are all about. However, on the character and universe development side, things aren't any better. There is a tiny bit of information about what it means to be a Dzur, but I thought that was actually covered in much better detail by the related Phoenix Guard books. And even though we get to see a fair bit of Sethra, there was nothing much to really add to our understanding of her.

It was time for us to see a post-gangster, post-exile Vlad. Instead, we got something of a regression. In fact, if there was any one of the old characters who really should have been involved in this book, it was actually the one who was explicitly not included ... Vlad's grandfather.

Since he mentions perhaps stopping off there on his way out of town, I'm hoping the next time Brust writes about Vlad the results will be a little more interesting.
Read more
6 people found this helpful
Report abuse

John Forman
4.0 out of 5 stars Liked it, Didn't Love it
Reviewed in the United States on 23 February 2008
Verified Purchase
Brust is at his old tricks in Dzur, meaning he used another little bit of fancy authorship to keep you recalling a specific character so he could use said character later in the book. I haven't always cared for what he's done in that regard, but this one wasn't too annoying.

A warning, though. Several of the Taltos series of books can be read out of sequence without too much concern. Dzur, however, speaks back to previous events more directly and frequently than most. I've read all the early books, but clearly not at least one of the later ones. I won't say I was lost, but the reading experience would definitely have been helped knowing the full back story.

In terms of the plot of this book, it was decent. All the classic Vlad banter and whatnot that endears one to the character is present. The storyline was interesting, but do I do feel a little wanting having reached the end. None of the Taltos books is long, but they are generally meaty, if you take my meaning. This one wasn't so much.

Overall, I did enjoy the read, but wouldn't rate this as one of the better books in the series.
Read more
One person found this helpful
Report abuse

Sean Dustman
5.0 out of 5 stars You can never go wrong with Vlad
Reviewed in the United States on 20 August 2006
Verified Purchase
Or for that matter anything by Mr. Brust. A long awaited continuation and for the first time some of the cobwebs have been pulled from Vlad's eyes, many of the loose strings in the plot line were cleared up but you get the same essence that there is more to the story then is being said. Steven Brust has a unique writing format that once you've acquired a taste for, you need to keep returning for a fix. Got the book yesterday afternoon and was done with it by the time I went to bed, not the longest book but this series isn't known for the length of the books but by the quality of the writing. Every word has it's proper place and setting, almost like good recipe! Are there any other people that can read one of his books finish it, then start reading it again because you there was something hidden in his words? He's the only author that can immediately call me back right after finishing it and unlike the other fantasy "epic" writers, each book is a story of it's own, can be read as part of the series, out of order or by it's self without losing any of it's quality. Robert Jordan, Terry Goodkind and George R.R. Martin's story lines are fixed in their formatting, if they keel over (like RJ might) all of the fans are left hanging, not so with Vlad. While it would be a great loss, there is no beginning or end to the series, there are many mysteries to solve but and tales left untold but he leaves you at the end of the book thinking about it, the hook is there but it's not a painful hook. You want to come back just because it's a great series and no matter how you look at it, you're going to be satisfied reading one of these books.
Read more
3 people found this helpful
Report abuse

Delray P. Curtis
5.0 out of 5 stars Ah! Hello Vlad, my old friend, glad to see you again.
Reviewed in the United States on 26 February 2008
Verified Purchase
The story: This is the 10th book in the series, so there is a lot of setup which goes into getting to this point in the story, so, to avoid giving anything good away, I am going to be a bit confusing which is just as well because the books do not follow any chronological order: this story start exactly where the prior book, Issola, left off with Vlad walking into Valabar's to enjoy a meal the likes of which he had not had in a few years. Of course, doing so was a pretty stupid thing to do consider the size of the price that is on his head, but he would have time to enjoy his meal and leave with little to no chance of someone killing him, but of course, something else comes up; he has to bail out his wife from the mess he left behind from the last time he bailed her out which was why he was on the run to begin with.

His wife left him for, well, let's just say, he didn't listen very well, but at the same time, in order to save her that time, well, he got the price put on his head. So the results of this book, he saves her again, and gets a lot more people pissed off at him which will no doubt increase the price on his head but he has along the way in the past picked up some toys, one of which he can use to threaten gods into helping him, so finding or killing him will not be easy.

I just cannot wait for the next book in the series.
Read more
One person found this helpful
Report abuse
See all reviews
Get FREE delivery with Amazon Prime
Prime members enjoy FREE Delivery and exclusive access to movies, TV shows, music, Kindle e-books, Twitch Prime, and more.
> Get Started
Back to top
Get to Know Us
Make Money with Us
Let Us Help You
And don't forget:
© 1996-2020, Amazon.com, Inc. or its affiliates