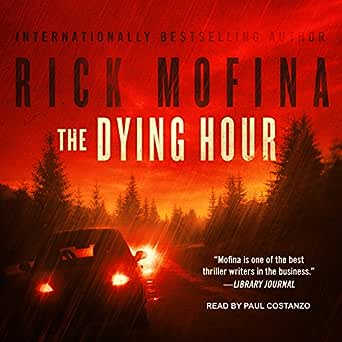 Aunt Annie
2.0 out of 5 stars If gratuitous violence against women is your thing...
8 August 2017
Format: Kindle EditionVerified Purchase
This book is quite readable, but the depiction of women as constant victims having little power or even intelligence compared to the male figures in the story started to irritate me in the end, as did the graphic violence. The holes in the plot by the end were also notable. Why did Karen get stowed rather than killed at once like all the others? No answer. Who owned the bead bracelet? Silence. Why did the victims not have any common thread? Zip. What was the point of Karen's Christianity? If it was supposed to be a counterpoint against the corruption of religion embraced by the killer, it failed dismally as a character device.

Not a great book by any means. Disappointing.

Tazzii
TOP 500 REVIEWER
5.0 out of 5 stars Loved it.
1 August 2018
Format: Kindle EditionVerified Purchase
I loved this book and kept me hooked all the way through. I do admit to skipping the "waffle" as soon as I seen the print in itialics I skipped it. That is one reason this book was good. It let you know what me know the parts I did not need to read. Great mystery and thriller. I cant spoil the ending but have to say I was right in my thinking pattern.
Read more
Helpful
Comment Report abuse

Keith
TOP 500 REVIEWER
5.0 out of 5 stars Outstanding drama
26 July 2018
Format: Kindle EditionVerified Purchase
An outstanding and thoroughly engaging suspense thriller. I was totally engrossed and would highly recommend readers to get hold of this and other Rick Mofina books
Read more
Helpful
Comment Report abuse

Ian Robert Carron
5.0 out of 5 stars Loved It!
5 August 2018
Format: Kindle EditionVerified Purchase
Thank goodness I'm retired! I read at night and this is a 'just one more chapter before I turn the light out' book! Loved it!
Read more
Helpful
Comment Report abuse

Bevan
3.0 out of 5 stars Could have been a lot better.....
22 August 2017
Format: Kindle Edition
On the PLUS side: it kept me reading!
On the MINUS side: there's rather a lot of padding waffle and large holes in the plot logic that you could drive a Mack truck through!
At times the telling is thrilling / at others: it's just plain corny.


Read more
Helpful
Comment Report abuse
See all 8 customer reviews
Write a customer review
Get FREE delivery with Amazon Prime
Prime members enjoy FREE Delivery and exclusive access to movies, TV shows, music, Kindle e-books, Twitch Prime, and more.
> Get Started
Back to top
Get to Know Us
Make Money with Us
Let Us Help You
And don't forget:
© 1996-2020, Amazon.com, Inc. or its affiliates