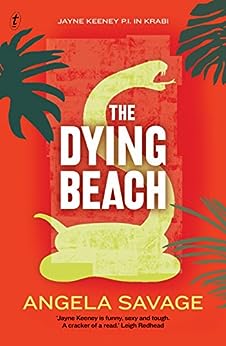 aeb
5.0 out of 5 stars Fun in the Sun...but with a dead body or two...
Reviewed in Australia on 6 January 2015
It’s possible that Jayne Keeney, the PI we met in Behind the Night Bazaar, is a little more relaxed and fun in this book, but it may because having met the author I am merging the two… The opening is however on a Thai beach better known for holidays than dead bodies so this may help…but dead body there is, and more to come. Jayne has a new boyfriend/business partner, the younger Rajiv, her usual run ins with Thai police, and more than ever she is wonderful at picking the cultural nuances at the Australian- Thai interface. There’s fun and action, and a slightly unusual structure with the plot seeming to be over by the end of the second act but then the third takes us off in a new direction solving the original problem! You don't need to have read the first one to read this, but read both!
Read more
Helpful
Report abuse

Diana Baker
5.0 out of 5 stars Another must read Savage novel
Reviewed in the United States on 18 September 2013
Verified Purchase
Just as I had compiled my summertime reading list, Angela Savage's new Jayne Keeney PI novel The Dying Beach was released and went straight to the top of my e-pile. The next best thing to holidaying in Thailand is being taken there by Savage, notwithstanding dead bodies strewn on beautiful tropical beaches. This is the third Jayne Keeney novel and we find her on holidays with Rajiv her lover and business partner when they come across a recently dead tour guide they had met the previous day. Keeney is drawn to the case despite Rajiv's cautionary influence and the mounting body count; Keeney can't let go the quest for justice for the young woman. The tour guide turns out to be an environmental activist and the unravelling of this life opens up another Thailand beneath the beauty of its beaches: rampant development, diminishing ecosystems and livelihoods; corrupt police and violence. The fiercely independent Keeney also struggles with the concept of partnership as she and Rajiv negotiate the tricky territory of romance and business across culture, and in a place where they are both foreigners. These serious themes are handled assuredly in a fast-paced novel packed with vivid characters and scenes of dying mangroves, snake pits, blood-spattered digs and other places you really don't want to visit outside of a novel. Highly entertaining! Highly recommended!
Read more
One person found this helpful
Report abuse

Rose M
5.0 out of 5 stars Excellent read
Reviewed in the United States on 10 February 2014
Verified Purchase
A trip to Thailand would be enhanced after reading this novel as it gives the reader a deeper understanding of the country and its culture. Angela Savage has again put Jayne Keeney PI and her partner Rajiv in this exotic location where they need to unravel a couple of mysterious deaths while trying to maintain their relationship. A crime novel bordering on an environmental thriller, this book kept me up till early at night savouring every word. I hope we don't have such a long wait for another in this series.
Read more
Report abuse

Caron Eastgate Dann
5.0 out of 5 stars A work of substance—and a jolly good read
Reviewed in the United States on 13 December 2013
Verified Purchase
In Jayne Keeney, Savage has an original and engaging character—but Jayne's partner, Rajiv, vies for top billing here, and is beautifully drawn as the perfect foil. The novel is fast-paced with a fascinating setting, especially if you know Thailand. It is also constructed to work on many levels, including covering environmental concerns. This is a work of substance and literary merit, but it's also a jolly good read. Although it is the third in the series of Jayne Keeney mysteries, you wouldn't have to have read the other two to enjoy this. Someone should make these books into a TV series.
Read more
Report abuse

Felicity Young
4.0 out of 5 stars Thai flavoured mystery
Reviewed in the United States on 4 August 2013
Verified Purchase
If you can't get to visit Thailand, reading one of Angela Savage's Thai based mysteries is the next best thing. In fact sometimes PI Jayne Keeney's murder investigation seem secondary to the colourful country's back drop and the problems it faces through development. Not meaning that Savage has not created an exciting and tightly woven mystery - she has - but it's the Thai factor that puts this book above the rest for me.
Read more
One person found this helpful
Report abuse

maria
3.0 out of 5 stars Easy read but....
Reviewed in the United States on 20 February 2014
Verified Purchase
The story and description of Thai social norms and Krabi captured my interest but the characters were very uneven - Savage should ditch the love interest between Jayne Keeney and her sidekick and have them as business partners. Would work better I think.
Read more
Report abuse
See all reviews
Back to top
Get to Know Us
Make Money with Us
Let Us Help You
And don't forget:
© 1996-2021, Amazon.com, Inc. or its affiliates