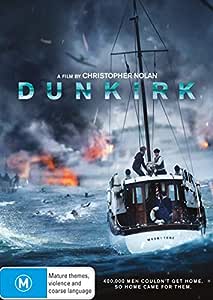 The story unfolds on land, sea and air, as hundreds of thousands of British and Allied troops are trapped on the beaches of Dunkirk with enemy troops closing in. RAF Spitfires engage the enemy in the skies above the Channel, trying to protect the defenceless men below. Meanwhile, hundreds of small boats manned by both military officers and civilians are mounting a desperate rescue effort, risking their lives in a race against time to save even a fraction of their army.

The Event That Shaped Our World

In May 1940, Germany advanced into France, trapping Allied troops on the beaches of Dunkirk. Under air and ground cover from British and French forces, troops were slowly and methodically evacuated from the beach using every serviceable naval and civilian vessel that could be found. At the end of this heroic mission, 330,000 French, British, Belgian and Dutch soldiers were safely evacuated.

Mr Robert M Goodale
5.0 out of 5 stars Christopher Nolan succeeds again
22 December 2019
Format: Blu-rayVerified Purchase
Excellent price for this product, and another great Christopher Nolan film. Music wonderful and quite original for Hans Zimmer, although quite a demanding soundtrack to listen to in isolation.
Read more
Helpful
Comment Report abuse

Giff
5.0 out of 5 stars Miracle Rescue By A Courageous Nation
28 July 2018
Format: Blu-rayVerified Purchase
Excellent modern remake of the miracle rescue of thousands of stranded soldiers in WWII on Dunkirk beach through courage, determination and conviction of the people of the United Kingdom
Read more
Helpful
Comment Report abuse

Lilian
5.0 out of 5 stars Very well made
6 June 2018
Format: Blu-rayVerified Purchase
New format with more up to date special effects. Very well made. Haven't seed it on the wide screen but I well like this copy
Read more
Helpful
Comment Report abuse

MontyLauda
5.0 out of 5 stars Great action and visually excellent too.
6 December 2019
Format: Blu-rayVerified Purchase
Chris Nolan has given us a visual delight with this 70mm remake of a dour hour in British history.
Read more
Helpful
Comment Report abuse