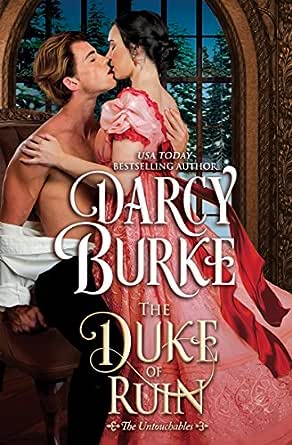 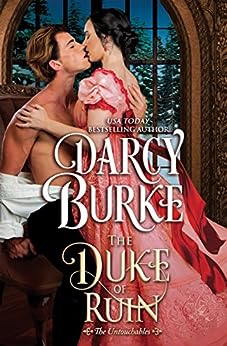 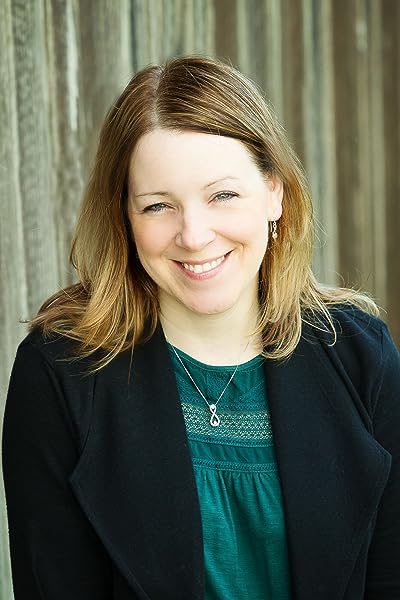 The Duke of Ruin (The Untouchables Book 8) Kindle Edition

“…everything I could ever ask for in a historical romance. Aside from being romantic, this book also has a bit of adventure, which is always welcomed… impossible to stop reading.”

“…Darcy will send you back in time with a lush setting, rich characters and an angst/love filled story will be enjoyed.”

“This is a fast paced novel that held me in until the last page.”

“…I was immediately drawn in by the characters. Not only are they tangible and hilarious, their chemistry is evident from the moment they interact and their romance just made sense.”

4.6 out of 5 stars
4.6 out of 5
93 global ratings
How are ratings calculated?
To calculate the overall star rating and percentage breakdown by star, we don’t use a simple average. Instead, our system considers things like how recent a review is and if the reviewer bought the item on Amazon. It also analyses reviews to verify trustworthiness.

Bec
TOP 500 REVIEWER
5.0 out of 5 stars Darcy Burke does it again in delivering an absolutely superb Historical Romance.
Reviewed in Australia on 4 April 2018
When the man she was supposed to marry decides he's in love with someone else and chooses to marry the other woman instead, Diana Kingman knows she must leave to avoid a scandal. However, she knows her father isn't going to let her get away easily, so she accepts help from Simon Hastings or as he's widely known as 'The Duke of Ruin'. Yet, as Simon and Diana grow closer, she can't help but be determined to find the truth of what really happened to Simon's late wife. Will the truth finally set him free, or will the pair lose their chance at happy ever after?

This is the second book I've read of this series and I've got to say that it was such a wonderful read because of the main characters and everything they go through their journey to happy ever after. Including the truth coming out about what really happened to the hero's late wife and the heroine having to deal with her father once and for all. No longer can the overbearing man make her life a total torment. However, it was from the moment the hero and heroine come face-to-face for the first time in this story that drew me into this story, as the hero is compassionate and willing to do anything to help the heroine. What will she decide to do?

As for the dialogue, it was very entertaining and had me loving the growing relationship between the hero and heroine, especially since they need each other to heal from their pasts. The hero is full of guilt because of what happened to his late wife while the heroine has suffered verbal abuse from her father for years that has left her worn down. However, in saying that, it's also made her resilient and determined to finally get free, which is proven by the decisions she makes when it comes to the hero. Will she accept his help? Will she accept what he asks of her? While the hero, he's kind, caring and I loved that he would do anything to help his friend Nick because the man can't marry Diana when he loves someone else. I also liked how protective the hero is of Diana when it comes to her father and that he stood up to the man for her. No way was he going to let her father continue to reign terror on her life.

Overall, Ms. Burke has delivered a fantastic read in this book where the chemistry between this couple was strong; the romance was delightful and had me loving the heroine's determination to prove to Simon that she's ready to move their relationship from platonic to physical intimacy and there's nothing he can do to change her mind; and the ending had me loving how things work out for this couple and had me glad that the hero finally learns the truth of what really happened that fateful night of his wife's death. Will the truth absolve him from his guilt? However, it was the epilogue that wrapped this story up nicely because of the interaction between the hero, heroine and a couple of the secondary characters. It had me smiling and shows how good the heroine is for the hero and vice versa. I would recommend The Duke of Ruin by Darcy Burke, if you enjoy the opposites attract trope or books by authors Christi Caldwell, Eva Devon, Jess Michaels and Callie Hutton.

MsT
TOP 1000 REVIEWER
5.0 out of 5 stars Darcy Burke has added another wonderful story to her Untouchables series
Reviewed in Australia on 31 March 2018
I was given a copy of this book through NetGalley and the publisher for an honest opinion.
Darcy Burke has added another wonderful story to her Untouchables series. This is number 8 and the series could go on forever and I would not be disappointed at all. This story is Simon Hastings HEA. Simon has felt the need to in form the very lovely Diana Kingman that her fiancee is no longer going to be able to marry her as he has fallen in love with another. Diana is sure that her brutal father will try and still force the marriage so she asks for aid in escaping to go to see a friend of hers There is a Gretna marriage to save her reputation and they return to Simon's estate which is a holds a very tragic mystery as Simon's wife who was with child had fallen down the stairs to her death. Who was responsible? Was it the wife who fell? Was she pushed? The mystery is finally solved and Diana and Simon finally get their HEA. I like this book very much as it seemed to have a gothic mystery feel to it.
I recommend this book and give it 5 stars.
Read more
Helpful
Comment Report abuse

Roslyn :)
5.0 out of 5 stars Great read
Reviewed in Australia on 28 March 2018
Having read all the series, I think this is one is my favourite. I loved the Duke of Ruin who really only wanted the best for everyone. He was so misunderstood both by himself and the ton. And Diana who was so strong and yet kept under thumb and not allowed to live and be herself by her cruel father. Ms Burke has really created the perfect love story, with lots of understanding, a little adventure and a twist. This book had me turning the page, loving the interaction between all the characters including many secondary ones. Although there is not a lot of adventure or mystery, it is still very much an enjoyable read. I received this book as an ARC.
Read more
Helpful
Comment Report abuse
See all reviews

Brigitte
4.0 out of 5 stars Heartfelt
Reviewed in the United Kingdom on 5 April 2018
Verified Purchase
The Duke of Romsey/Ruin is one of the main features in the previous book and I was curious about his background. It's another heartfelt story.

Simon spends his time travelling to avoid his Dukedom, where a tragic occurrence lingers and haunts him.

Diana's life has been dictated by her parents, mainly her abnoxious father. She finds herself in a predicament which could create no end of scandal amongst the ton and enrage her father.

Simon readily offers his help to Diana and she agrees to avoid her father's wrath. His reputation is already in tatters and he takes a risk by helping his friend, Nick. Having previously met Diana, he is quite taken with her and the long journey that they undertake together brings them closer. This is the first time that she has felt safe, but when they are recognised, their plan is threatened and they resort to an alternative one, which turns out to be more than they dreamt of.

Simon is plagued with guilt and doesn't think that he deserves any happiness. He is a kind and considerate soul, but the taint on his name is a burden that he carries well. Diana is compassionate and as she gets to know him, she is convinced that he is not guilty of the accusations against him. The twist at the end comes as a reality check for Simon. It's a well rounded and intriguing story with a worthy conclusion.
Read more
One person found this helpful
Report abuse

Kindle Customer
5.0 out of 5 stars The duke of ruin by Darcy Burke
Reviewed in the United Kingdom on 15 March 2020
Verified Purchase
I admire this author. Always lots of intriguing story lines. This one held my interest from the very beginning in fact I found it impossible to put down, very disappointed it ended, now it's time to find my next read.
Read more
Report abuse

Mrs CM Rodgers
5.0 out of 5 stars A great series
Reviewed in the United Kingdom on 25 July 2020
Verified Purchase
This author writes well and this series is great to follow
Read more
Report abuse

Brenda D
5.0 out of 5 stars Pleasurable
Reviewed in the United Kingdom on 18 June 2018
Verified Purchase
Needed to keep reading. Read this book in just two days
Easy reading with no long drawn out boring parts but with plenty of intrigue.
Read more
Report abuse

Cindy
5.0 out of 5 stars Always exciting stories!
Reviewed in Canada on 1 October 2018
Verified Purchase
I have read this whole series so far! I love Darcy Burke’s stories, I can seem to put them down! I can’t wait for the next “untouchable” story.
Read more
Report abuse
See all reviews
Get FREE delivery with Amazon Prime
Prime members enjoy FREE Delivery and exclusive access to movies, TV shows, music, Kindle e-books, Twitch Prime, and more.
> Get Started
Back to top
Get to Know Us
Make Money with Us
Let Us Help You
And don't forget:
© 1996-2020, Amazon.com, Inc. or its affiliates