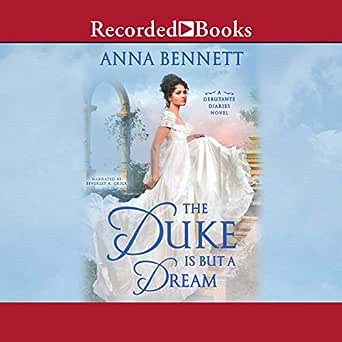 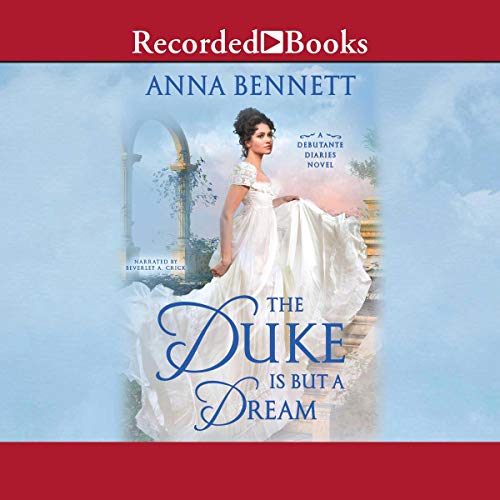 The Duke Is But a Dream

The Duke Is But a Dream
Anna Bennett (Author), Beverley A. Crick (Narrator), Recorded Books (Publisher)
Audible is $16.45/mo after 30-days. Cancel anytime.

paddlefoot1397
TOP 10 REVIEWER
3.0 out of 5 stars Light and fun story
Reviewed in Australia on 31 July 2019
I have not read the first book in the Debutante Diaries series, however that did not affect my reading of book 2.

I am on a bit of a historical kick at the moment, and The Duke Is But A Dream was just the light, enjoyable read I was after.

Strong women, gruff men, amnesia, family secrets - this story had a bit of it all.

Lily and Nash's story has more hurdles to get over than an Olympic final, however they do it. I love that Lily goes after what she wants, she never waivers from her beliefs, and won't back down no matter what.

Nash - ugh, what is with all this "I don't do love" BS, dude? He is all kinds of swoonworthy and lovely and then BAM - nope, back that truck up lady!

I adored Sophie, Lily and Fiona. Their friendship is one that we could all aspire too.

The characters are wonderfully developed, the writing story was lovely and flowing, and even though I wasn't sure what historical period we were in, it didn't bother me in the least.

Now I need to go back and read Fiona's story and wait impatiently for Sophie's.

Amazon Customer
5.0 out of 5 stars not everything is a dream
Reviewed in Canada on 19 February 2020
Verified Purchase
It takes courage and instinct to follow your heart and fulfill dreams family is there along with friends for advice I have read the first 3 novels and I get the impressionthe 3 gentlemen are helped by a newcomer the stories are intriguing fansinating and easy to follow
Read more
Report abuse

Melanie Valente
4.0 out of 5 stars A delightful romance
Reviewed in the United States on 13 August 2019
Verified Purchase
The Duke Is But a Dream features a delightful romance and is a fantastic continuation of the Debutante Diaries series.

Miss Lily Hartley is the anonymous author behind The Debutante’s Revenge, an advice column for young ladies that the ton considers scandalous. One night while on her way home after delivering her next column Lily is forced to seek shelter in a tavern to avoid a storm. When a fight breaks out in the tavern Lily, disguised as a boy, is knocked unconscious and rescued by the Duke of Stonebridge. But upon awakening, Lily has no idea who she is or how she came to be in the tavern. As Lily spends time recovering in Nash’s home, the attraction between her and Nash grows stronger every day and soon the pair are at risk of losing their hearts.

Lily is a very clever young woman who believes other young ladies should better prepare themselves for what happens when looking for a match. In the ton’s eyes, Lily’s ideas are considered scandalous or radical as they encourage young women to take control over their own love lives, hence the need for anonymity. I liked getting to see how much the columns meant to Lily and how she simply wanted to help others with her advice.

Nash lost his twin sister and his father in a carriage accident several years prior to the start of the book which is something that still greatly affects him. Nash was very close with his sister and he blames himself for her death. Due to his guilt, Nash is very controlling when it comes to his younger sister which causes some tension between them. While I did understand where Nash was coming from, his overprotectiveness did get frustrating at times.

Lily and Nash’s relationship was wonderful from the start and I found myself really enjoying it despite amnesia storylines not being my favorite. Lily was able to open up and be herself without any of society’s constraints as she had no memory of how a lady was expected to behave. With Nash, she’s able to be open and honest and I loved how playful and sarcastic she could be. The story takes place over a very short amount of time, but I had no issues buying into their relationship as their circumstances made the rapidness of their relationship make sense. Lily and Nash have amazing chemistry and when their relationship progresses physically, it’s very well done.

Overall The Duke Is But a Dream was a very enjoyable read and I’m looking forward to reading more from the author in the future.
Read more
2 people found this helpful
Report abuse

Élodie Nicoli
5.0 out of 5 stars When recovery is on the path of love
Reviewed in the United States on 30 July 2019
Verified Purchase
I confess I was granted this ARC some days ago but more pressing reads stolen its place in my reading list.
And worst, I even have the previous book in the series and it was forgotten somewhere on my shelves.
Lily with her sister and friend decided to improve in their own way the life of the ton’s debutantes with their wicked column. I liked her boldness, and strength. She is clever and has a level head.

« She wasn’t about to give up her spot among the potted palms for a man who thought women were mere ornaments. »

Nash is a good man, despite his guilt, he thinks only to protect his remaining sister even if his way to show it is quite over the top. And because of past experience, he has decided, Love is surrendering its sanity.

« In his mind, love always led to pain, devotion to disaster. And he didn’t have room in his heart for those messy, unpredictable emotions. Didn’t have room for her. »

I liked the side characters, I was just a bit upset at Nash’s sister, she knows how wounded he was from their family’s history and she repeats the storyline, it was trivial and hurtful.
The book sucked me in, the main characters were very lovable until at some stage of the story , it felt like something was missing.
I enjoyed reading Lily and Nash’s journey but he didn’t appear to behave like a duke, sure if I count well, he is only 23, but I thought a Duke would have acted more “duke-like”.
Plus their week-trip alone was not right, no inn would have accepted them so easily, did I missed something in the story?
In all, it was a lovely story and Mrs Anna Bennet has joined my list of to-read-authors.
4.5 stars
I was provided an advance copy by Netgalley and St Martin’s Press, but I purchased my own copy and I voluntarily give my true and unbiased opinion.
Read more
Report abuse

Cbarnett
5.0 out of 5 stars Sweet read
Reviewed in the United States on 5 August 2019
Verified Purchase
This was an enjoyable read. The author did a good job with her characters. Nash is the Duke of Stonebridge and when he decides to go to a pub he has no idea that his life is about to change. Lily is the author of a article in the news paper that is the talk of the ton. When she delivers her article to the paper she goes dressed as a boy. When she was done delivering her article she decides to be adventurous and goes into a pub to eat and to observe the people. However things go wrong when she is approached by some patrons to take her money. When another patron steps in to protect her she hurt and Nash discovers she is a she not a he. Since no one knows who she is Nash takes her to his home to have his Dr. take care of her and when she comes to she has no idea who she is. During her recovery while staying at Nash’s they cannot stop the attraction for one another.

This was a good read. I received this book from Netgalley for an honest review.
Read more
Report abuse

Pamela R Mitchell
4.0 out of 5 stars Refreshing Regency romance
Reviewed in the United States on 1 August 2019
Verified Purchase
I enjoyed this refreshing Regency romance with complex characters and so well written I was completely immersed in all that was happening from beginning to end. I loved Lily Hartley and her dynamic with the other characters especially her immediate attraction and undeniable chemistry with Eric Nash, Duke of Stonebridge. This is a must-read for anyone who enjoys well-crafted period romances with strong females. This is the first book I have read by Anna Bennett but I look forward to reading more from this gifted author. I received an advance reader copy of "The Duke Is But a Dream" from the publisher via NetGalley and am voluntarily leaving my honest review. I enjoyed it so much, I purchased a copy for my keeper library.
Read more
Report abuse
See all reviews
Get FREE delivery with Amazon Prime
Prime members enjoy FREE Delivery and exclusive access to movies, TV shows, music, Kindle e-books, Twitch Prime, and more.
> Get Started
Back to top
Get to Know Us
Make Money with Us
Let Us Help You
And don't forget:
© 1996-2020, Amazon.com, Inc. or its affiliates