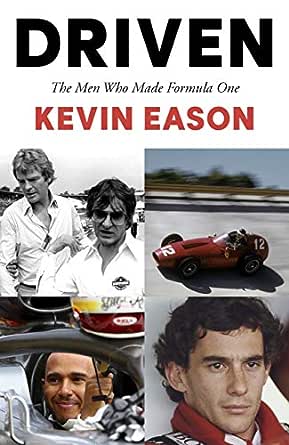 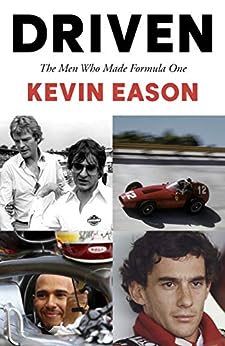 Driven: The Men Who Made Formula One Kindle Edition

The book's many anecdotes make it fast-paced and difficult to put down. - AutosportAs a primer on how F1 got to the state it is in - and who got it there - you couldn't ask for much better. Driven tells you more about any of its subjects in a handful of pages then the last book I read on F1 managed in 300. - Racefans.net

The book's many anecdotes make it fast-paced and difficult to put down. - AutosportAs a primer on how F1 got to the state it is in - and who got it there - you couldn't ask for much better. Driven tells you more about any of its subjects in a handful of pages then the last book I read on F1 managed in 300. - Racefans.net
See all Product description
click to open popover

David Nichols
5.0 out of 5 stars Celebration of an era
Reviewed in Australia on 8 April 2019
Format: Kindle EditionVerified Purchase
Not just a well researched and informative review of over 60 years of F1 , but also a wonderfully entertaining read from one of the industry's leading lights. Highly recommended.
Read more
Helpful
Comment Report abuse
See all reviews from Australia

P. N. I. Jeffrey
3.0 out of 5 stars Needs a time line!
Reviewed in the United Kingdom on 22 January 2019
Verified Purchase
I liked Kevin Eason's style in the Times and he doesn't disappoint here. I read from start to finish. Always a good sign! Some nice stories - Eddie Jordan buying fake watches being my favourite - and a generally affectionate view at most of the characters that dominated F1 in the last 2-3 decades (it is less detailed on 50s and 60s racing). However, Ron Dennis may care to look the other way. As other reviews have said there is a tendency to jump around. OK if you know your F1 history but less so for a casual reader or general F1 fan. A chronology would help greatly. Nice mini bios of some of the main names at the end. Good book overall.
Read more
4 people found this helpful
Helpful
Sending feedback...
Thank you for your feedback.
Sorry, we failed to record your vote. Please try again
Report abuse

Adam
5.0 out of 5 stars A real insight!
Reviewed in the United Kingdom on 21 November 2018
Verified Purchase
An eloquently written tale of the most interesting and tumultuous years of F1 and the those orchestrating it. Penned by a master at his craft who has an almost encyclopaedic knowledge of his subject. Over 20 chapters the author skilfully connects the dots; moments in time, to reveal a rich and colourful tapestry depicting the life and times of some of the most prodigious characters around the pit lane during a fascinating epoch in F1 and its flying circus. A real insight and a pleasure to read! *****
Read more
2 people found this helpful
Helpful
Sending feedback...
Thank you for your feedback.
Sorry, we failed to record your vote. Please try again
Report abuse

Julesy
5.0 out of 5 stars Detailed description of events
Reviewed in the United Kingdom on 6 January 2019
Verified Purchase
This was a Christmas present. Lovely book and the recipient was exceptionally pleased with it as the write up is very detailed. Quick delivery.
Read more
One person found this helpful
Helpful
Sending feedback...
Thank you for your feedback.
Sorry, we failed to record your vote. Please try again
Report abuse

Pen Name
5.0 out of 5 stars Person happy
Reviewed in the United Kingdom on 24 March 2019
Verified Purchase
Brought as a gift and person is really pleased with the book and quality
Read more
Helpful
Sending feedback...
Thank you for your feedback.
Sorry, we failed to record your vote. Please try again
Report abuse

Cynthia B. Sowdon
5.0 out of 5 stars Book about formula racing
Reviewed in the United Kingdom on 9 January 2020
Verified Purchase
Was a present, he enjoyed reading it.
Read more
Helpful
Sending feedback...
Thank you for your feedback.
Sorry, we failed to record your vote. Please try again
Report abuse

Jane
5.0 out of 5 stars Purchased as a present
Reviewed in the United Kingdom on 22 February 2019
Verified Purchase
The recipient of the book enjoyed it
Read more
Helpful
Sending feedback...
Thank you for your feedback.
Sorry, we failed to record your vote. Please try again
Report abuse

Steve77
5.0 out of 5 stars F-1
Reviewed in the United Kingdom on 5 March 2019
Verified Purchase
A good interesting read.
Read more
Helpful
Sending feedback...
Thank you for your feedback.
Sorry, we failed to record your vote. Please try again
Report abuse

Dr David E. Ward
5.0 out of 5 stars Must read!
Reviewed in the United Kingdom on 5 December 2018
Verified Purchase
A must read for any F1 fan!
Read more
Helpful
Sending feedback...
Thank you for your feedback.
Sorry, we failed to record your vote. Please try again
Report abuse
Load more international reviews

Richard Aish
4.0 out of 5 stars Great insight behind the scenes in F1
Reviewed in the United Kingdom on 18 January 2019
Format: Kindle EditionVerified Purchase
Really well written with lots of great anecdotes, well worth a read if you’re an F1 nut!
Read more
Helpful
Sending feedback...
Thank you for your feedback.
Sorry, we failed to record your vote. Please try again
Report abuse

TDB
5.0 out of 5 stars A great gift for a race
Reviewed in Canada on 2 July 2019
Verified Purchase
Great book for Formula One fans.
Read more
Helpful
Sending feedback...
Thank you for your feedback.
Sorry, we failed to record your vote. Please try again
Report abuse

A Kirk
5.0 out of 5 stars It's about the (mostly) men, not the machines
Reviewed in the United States on 15 January 2019
Format: Kindle EditionVerified Purchase
Even if you aren't a petrol head, Formula 1 addict, or even particularly interested in cars, you shouldn't click away yet or you may miss out on a story which is worth your time.

This is no dry, technical tome about the mechanical aspects of Formula 1; as the subtitle suggests, it's a "people story" at its heart. And a pretty compelling one, with a cast of characters who are so much larger than life that they would stretch believability had they been in a novel. But this is not a novel; the characters are all real, and these events happened.

There is drama, there is conflict (oh my yes, there is conflict), there is tragedy and the occasional touch of humour too.
Though the storyline flows (more or less) from the earliest days of what would become F1 through to the modern day, it's not a linear narrative. The best books usually aren't. Most chapters are based on a theme, and build on the foundations that were laid in the earlier chapters.

It's a style that I like; it doesn't drag you down into mind numbing detail at any one point. Instead the book builds on itself, layer by layer, chapter by chapter so that over time you learn more about the cast of characters. The earlier chapters provide context for the stories that will be told later.

I found it to be a very even-handed book, neither hagiography nor hatchet job though no doubt some of the characters will take issue with some of the things said about them. It's a very human trait to look past 5 positive things which are said about us and home in on one slightly negative one. Indeed nobody comes out of this book looking anything but human, with both strengths and weaknesses, virtues and vices.

Yes, even Uncle Bernie, believe it or not.

I initially listened to rather than read the book, having purchased the Audible version which was narrated by the author.
That was a bit of a gamble, I think, but one which paid off. Many people underestimate the difficulty of narrating a work for hours on end without slurring or ending up with a voice that would not sound out of place in a frog. There is a reason why voice artists can make a living; it's a genuine skill.

I found Eason's tone to be calm and measured, but not boring. It may help that he was reading his own words, and it was therefore easier to impart the tone that he intended than it would have been for a voice over artist.

(I subsequently bought the Kindle version as well; it's easier to find passages that you want to re-read in an e-book than in an audio file. There are no illustrations, photos, etc in the Kindle edition other than those on the front cover not, I think, that it really needs them. I'm not sure whether that's also true of the printed edition since the photo acknowledgements section at the back seems a little too long to cover the 4 cover photos, suggesting that there may be more, but I'll leave readers of the print version to discuss that.)

So why read this if you aren't a Formula 1 fan? There can be enjoyment in a good story which is well told whatever the subject, and this satisfies both branches of that. Second, like it, loathe it or ignore it, Formula 1 has had an impact on the way the wider world works. When you turn the key in your car ignition, the parts of your car may not trace directly back to Williams or Ferrari but such teams will have had an effect, especially when it comes to safety features. Also, the sponsorships that were dragged into Formula 1 have had a profound and lasting effect on the relationship between the corporate world and the sporting world generally, and one which may outlast the sport itself.

By chapter 19 I was wanting to get to the end of the book. Not because I was tired of it but because I wanted to see what Eason had to say about the future of the sport. I've only recently acquired an interest in it but can see the storm clouds on the horizon, many of which Eason has also seen... but I'll leave him to speak for himself on that. For mine, while Liberty Media has done an excellent job in using social media to promote the sport, one of the stupidest things it could have done was to lock the broadcasts away behind paywalls of pay TV channels. The short term cash hit was wonderful no doubt, but I've lost count of the people I've heard say "F1 is dead to me" now that they have to pay to watch it. And without millions of viewers, why will advertisers continue to spend the sponsorship money that keeps the sport afloat?

Does the sport have a future? Time will tell. But it has a past, and a colourful past it is. I doubt you'll find many books tell the story of it better, from someone who was actually there for a lot of it.

Amazon Customer
5.0 out of 5 stars Great spread of information on an enormously wide subject!
Reviewed in the United States on 24 December 2018
Format: Kindle EditionVerified Purchase
Very unusual style with characters being covered as they come but not always in chronological order. Wonderful insights into the battles and the good and bad sides of these men. Like most sports today money has changed it forever.
Read more
Helpful
Sending feedback...
Thank you for your feedback.
Sorry, we failed to record your vote. Please try again
Report abuse