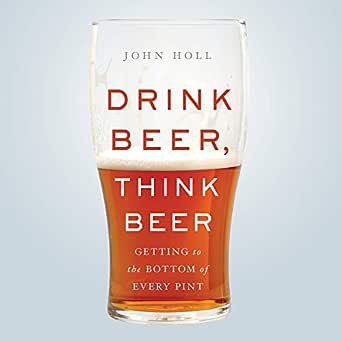 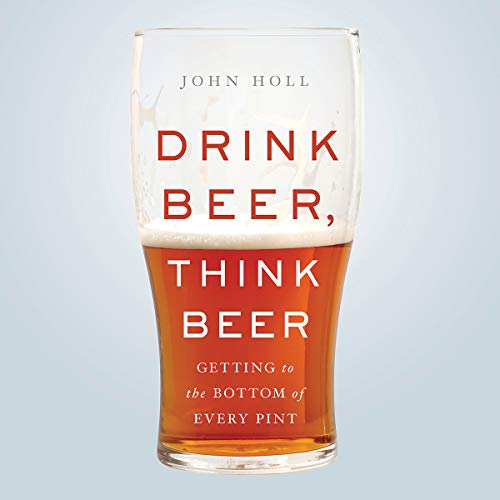 Drink Beer, Think Beer: Getting to the Bottom of Every Pint

Rob H. Bedford
5.0 out of 5 stars Perfect Read for All Beer Drinkers from Seasoned to Curious
Reviewed in the United States on 26 November 2018
Verified Purchase
Beer is in a golden age, and that doesn’t just refer to the color of the beer itself. It is a liquid that many can and do take for granted. But considering it is the #2 beverage in the world, coffee understandably being #1, beer is something worth pondering. Something worth considering, something that should be more than simply a drink. Beer can be a delicious experience where a full glass can be the intersection of art and science. Preeminent beer writer John Holl argues cogently, eloquently, and passionately that beer is something worthy of deep consideration in his book, Drink Beer, Think Beer.

The title of the book is really simple, but that belies the layers of complexity involved in the final product we hold in our hand. Perhaps the most enlightening elements of the book are the features on the four main ingredients: Water, Hops, Yeast, and Grain (usually barley). What is the water source of the beer? Beyond the ingredients, we can ponder the vessel/glass in which we drink the beer as well as the draft lines through which the beer travels before arriving in our glasses. Drink Beer, Think Beer exemplifies a good philosophy for life, don’t take everything for granted. Think about the things we consume, either with our guts or our brains. Whether it is a nuanced barleywine, a thick, barrel-aged stout, or a straight-forward pilsner in a clean, appropriately styled glass (as Holl eloquently points out). We should also put down our phones, be present and in the moment; enjoy the liquid we are drinking. As John says in the book, from page 192:

”When we slow down—and I include myself in this category—and allow an experience to happen naturally, organically, without worrying about the next social media moment, amazing things can happen. A deeper appreciate can blossom, happy memories can be aroused, new thoughts can develop.”

Some space in the book is devoted to marketing and some points he raises regarding beer names, I agree with wholeheartedly. Beer names that denigrate women or a particularly offensively named brown ale are the kinds of beers that, he suggests, can be mere attention grabbers. I’ve avoided an unfortunate swath of beers based on their offensive names alone myself. Holl’s overreaching point here, as it is throughout the book, is that the quality of the beer should be paramount. A catchy name shouldn’t be the sole reason for buying and drinking a beer.

One of the most striking elements of the book is that authoritative voice John brings to the book. He manages to come across as welcoming the reader, where some “authoritative” voices can come across too full of themselves and unapproachable. His writing style is inviting, clear, precise, and smart. A great combination to talk about a beverage that can be quite complex.

Some of what I read in Drink Beer, Think Beer was known to me, but there was ample information that was new, as well. Even the stuff that I already knew proved enjoyable and enlightening reading because of Holl’s enthusiastic and clear voice and the way he makes me look at many things about beer I took for granted. I also was drawn to the book because John Holl is a voice I’ve come to trust regarding beer and the beer community, I follow the guy on social media and listen to the two podcasts on which he is featured. Despite that, my expectations for the book were exceeded because of Holl’s enthusiasm and intelligence for beer, and how he conveyed it in Drink Beer, Think Beer .

To restate my opening sentiments, but in John’s words (Page 217):

“…this is an amazing time to be a beer drinker, and with our support, smart criticism, and enthusiasm for a proud tradition, better days will prevail.”

Bottom line: as a “seasoned” beer drinker with more than passing knowledge of beer history/culture, I found much to enjoy. Drink Beer, Think Beer is also a great book for folks who are curious about beer and have only passing knowledge about the subject. The book is just over 200 pages of the primary text, not including Epilogue, Acknowledgements, Bibliography/Recommended Reading, and Index. In other words, Holl gets a great deal of information across with precision and in a relatively short amount of space.

Timothy F. Hitchings
5.0 out of 5 stars Drinking beer is easy. This book is a great guide to thinking more during that next sip.
Reviewed in the United States on 11 September 2018
Verified Purchase
John Holl provides a great insight into the origins of beer, ingredients, flavors, and how to taste a beer. John describes the beginnings of the modern beer age with the excellent description of Jack McAuliffe and New Albion Brewing Company. Learning about how the beer industry continues to revere his accomplishments demonstrates the unique industry that he helped to form. This book is full of interesting stories told by an experienced member of the beer community that shows his love for the brew. An easy read for both new comers and those familiar with beer. His chapter The Death of Subtlety really rang a cord with me and reinforces how I want to think about beer. Highly Recommended.
Read more
3 people found this helpful
Report abuse

R.W.N.
5.0 out of 5 stars A Lager in a Hazy World
Reviewed in the United States on 13 November 2019
Verified Purchase
John Holl's book is as refreshing as a crisp lager in a world of hazy IPAs! John gets to the bottom of every pint through the lens of his long journalistic upbringing. He doesn't hold back; he asks the right questions, and he gets us all thinking about the entire beer experience. It's a must-read no matter your level of interest in beer, from casual to certified Cicerone. Highly recommended!
Read more
One person found this helpful
Report abuse

Craig Alperowitz
5.0 out of 5 stars Informative, Entertaining and a "Delicious" Read
Reviewed in the United States on 5 March 2019
Verified Purchase
John Holl is an excellent writer who takes you on a journey of his most beloved beverage - beer. Approachable and easy to read as a summer shandy, Holl dives deep into the ingredients, the production and all the variables that make each beer unique. He expertly takes you along for the ride, and in the end you're bound to appreciate beer in a whole new light. Whether you're an expert or just starting to learn more about craft beer, this read will teach you something new - so grab a pint (not in a shaker glass, mind you), cozy up and read on. You'll be glad you did.
Read more
2 people found this helpful
Report abuse

Mehgan Keil
5.0 out of 5 stars A thoughtful and helpful look into beer
Reviewed in the United States on 26 March 2020
Verified Purchase
Not just another book about beer for the sake of it. This is a thoughtful look at the world of beer for both good and bad and provides helpful advice on how to enjoy a pint, how to recognize both good and bad beer service, and how to have the best possible pint at home. Highly recommend for anyone who is interested in thinking a little bit more about what is in the glass.
Read more
One person found this helpful
Report abuse
See all reviews
Get FREE delivery with Amazon Prime
Prime members enjoy FREE Delivery and exclusive access to movies, TV shows, music, Kindle e-books, Twitch Prime, and more.
> Get Started
Back to top
Get to Know Us
Make Money with Us
Let Us Help You
And don't forget:
© 1996-2020, Amazon.com, Inc. or its affiliates