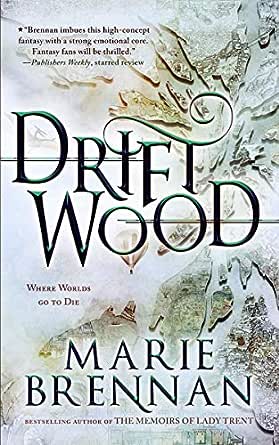 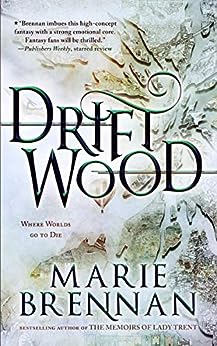 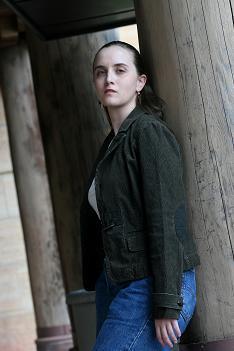 Kirkus Reviews Best Science Fiction and Fantasy of 2020
Library Journal Best Science Fiction and Fantasy of 2020 [STARRED REVIEW] "Brennan (the Memoirs of Lady Trent series) plays with the concept of secondary-world fantasy with this fresh, immersive introduction to the land of Driftwood, a patchwork world where other fantasy worlds come to die. As each otherworld is pulled toward the Crush, the churning center of Driftwood where their last vestiges mix and crumble before vanishing forever, its inhabitants must adapt to life in Driftwood or disappear along with their homes. The novel's form mirrors the cobbled-together nature of its world, composed primarily of self-contained episodes unified only by the shadowy figure of Last, the sole survivor of a world that Driftwood consumed long ago. Many who pass through Driftwood seek Last's aid, desperate to preserve their cultures and stop the inevitable and believing he knows the secrets to surviving the Crush. Brennan skillfully builds a multiplicity of worlds, painting each unique and fully developed culture with bold, minimalist strokes and, though readers don't get to spend much time with any single character, rendering each member of the sprawling cast with impressive nuance and subtlety. Exploring found family, adaptation, and hope in the face of apocalypse, Brennan imbues this high-concept fantasy with a strong emotional core. Fantasy fans will be thrilled.
--Publishers Weekly "Haunting, timeless, and timely. Brennan invented Driftwood, but it feels like she discovered it."
--Max Gladstone author of The Empress of Forever [STARRED REVIEW] "A diverse cast of characters from disparate worlds, each facing their own rapidly approaching mortality, come together to memorialize a missing man--rumored to be immortal--in this new fantasy title from veteran author Brennan . . . Readers will close the cover aching to read more about Last and his world. An exciting delve into a conglomerate land filled with magic and mystery."
--Kirkus [STARRED REVIEW] "When a world ends, whatever is left arrives at the Edge, emerging from the Mist that surrounds Driftwood. As the world shrinks, slowly dying, it becomes part of the Shreds, where scraps and pieces of different worlds combine, and where the citizens are just Drifters, inhabitants of this combined place. Eventually, everything ends up in the center, called the Crush, doomed to disappear--except for the guide called Last, a person who has lived far longer than anything else has. When he, too, disappears, people gather to memorialize him or criticize him or insist he isn't dead, but whichever it is, by gathering to tell stories about Last, they form an emotional picture of who he was. Brennan's series of vignettes is complex and riveting, populated by distinct worlds, each with its own rules. One has only a devastating sandstorm; in another, memories can be shared or given away; in yet another, magnetic stones enable flight. Last holds them all together with a mystery: was he a god, a man trying to help, or a man trying to survive off others? Driftwood is epic in scale and yet rooted in satisfying detail, full of possibility and wonder."
--Booklist "Driftwood is a richly imagined and shifting place. I keep thinking about it weeks after shutting the book. This is what people mean by 'haunting.'"
--Mary Robinette Kowal, author of The Calculating Stars "A wildly creative and imaginative novel that showcases an author's vast talent and hard work. Grab this book with both hands and hang on with white knuckles for an experience unlike any other book you are likely to read this or any other year."
--Scintilla "Bittersweet and haunting, Brennan's story celebrates the death-defying power of love and everlasting memory."
--Karen Lord, author of Redemption in Indigo "My favourite thing about this novel is the huge range of people and cultures which Brennan brings to life and explores. I can't wait to find out what else she has in store for us."
--British Fantasy Society "From religious zealotry to loners trying to save their little stretch of earth or memory of their people, Driftwood is as diverse as the Shreds themselves. Definitely worth a read."
--Manhattan Book Review "I'll snap any forthcoming sequel up in a heartbeat."
―Smart Bitches, Trashy Books "The world building is excellent. The characters are all well developed as well. I thought this was a fantastic book."
--Book Lover's Boudoir "The writing itself is beautiful, but it is the world-building (or perhaps more correctly world-breaking) where this book really stood out."
--Beneath a Thousand Skies "Between the extremely original world building, effective storytelling and fantastic writing I was spellbound by Driftwood."
--Looking Glass Books "Highly recommended especially to those who enjoy amazing and wondrous worlds. This book made a huge impression on me and I constantly find myself thinking about it."
--Hidden in Pages "I reveled in all of the world-building Brennan packed into this book."
--A Bookish Type "Marie Brennan never disappoints."
--Elitist Book Reviews "We're lucky to have the imagination of writers like Marie Brennan right now to keep us afloat amidst the flotsam and jetsam of COVID-19. Driftwood is a life preserver."
--The Woven Tale Press "Beautifully written and incredibly unique. This is definitely a book to check out this summer!"
--The Library Ladies 5/5 stars. A beautiful puzzlement and a fantastic read."
--Reading Reality "Driftwood is a fascinating and rewarding creation, conveyed in prose that can range from the solemn to the bitter to the darkly humorous but is never less than engaging."
--Blue Book Balloon "This is an innovative story with beautiful writing."
--The Borrowed Bookshelf --This text refers to the paperback edition.

Marie Brennan habitually pillages her background in anthropology, archaeology, and folklore for fictional purposes. She is the author of the Onyx Court series, the Doppelganger duology of Warrior and Witch, and the urban fantasy Lies and Prophecy, as well as more than thirty short stories.

Christina Delaine is a SOVAS Voice Arts Award and multiple AudioFile Earphones Award-winning narrator who has recorded over 100 audiobooks. She is also an Audie Award nominee. An accomplished stage and voice actor, Delaine has appeared on stages across the country and has voiced scores of commercials and video games. --This text refers to an out of print or unavailable edition of this title.

Robert H. Orr
5.0 out of 5 stars well packaged
Reviewed in the United States on 2 October 2020
Verified Purchase
What is there to say? I adore Marie Brennan's writing.
Read more
Report abuse
See all reviews
Get FREE delivery with Amazon Prime
Prime members enjoy FREE Delivery and exclusive access to movies, TV shows, music, Kindle e-books, Twitch Prime, and more.
> Get Started
Back to top
Get to Know Us
Make Money with Us
Let Us Help You
And don't forget:
© 1996-2020, Amazon.com, Inc. or its affiliates