Walks Through Mist (The Dreaming series Book 1) and over 1.5 million other books are available for Amazon Kindle . Learn more
Share <Embed> 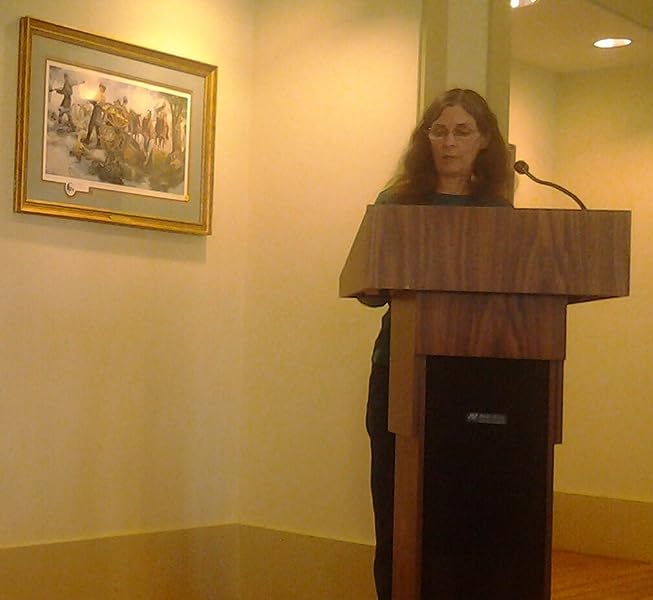 Page 1 of 1 Start overPage 1 of 1
This shopping feature will continue to load items when the Enter key is pressed. In order to navigate out of this carousel please use your heading shortcut key to navigate to the next or previous heading.
Back
Next
Start reading Walks Through Mist (The Dreaming series Book 1) on your Kindle in under a minute.

...a haunting tale of love and time travel... Readers will love Lee and Phoebe's story... as they explore the connection that burns so hot between them it's going to leave scorch marks. --Sabrina Cooper, RT Book Review

A transporting tale of star-crossed lovers caught between cultures and time. --Mary Sharratt, author of Daughters of the Witching Hill

This is a most enjoyable and unusual story from an author with a history of writing historical and supernatural novels... if you enjoy history, and the rather rare experience of reading a grownup paranormal romance that features neither vampires nor werewolves, then this is surely for you. --Rachel A. Hyde. myshelf.com

4.7 out of 5 stars
4.7 out of 5
158 global ratings
How are ratings calculated?
To calculate the overall star rating and percentage breakdown by star, we don’t use a simple average. Instead, our system considers things like how recent a review is and if the reviewer bought the item on Amazon. It also analyses reviews to verify trustworthiness.

Demelza Carlton
TOP 1000 REVIEWER
5.0 out of 5 stars A well-deserved five stars
Reviewed in Australia on 12 October 2014
Verified Purchase
This book was absolutely fascinating - I didn't want to put it down. It easily stands alone, though I admit I'm thrilled to hear it has a sequel. The enchanting style easily entices you in and doesn't let go.

Leaping effortlessly from the modern day to the early 1600s and the initial colonisation of the US by the English and their ongoing conflict with the native people, Ms Murphy introduces us to Phoebe Wynne, a cunning woman who can bridge both cultures and times.

The story is told partly from her perspective and partly from those of the cynical police officer and the psychologist who are assigned to her case, giving a break from her somewhat archaic speech patterns until you gradually get used to them.

A huge amount of research has evidently gone into this book, but it's been incorporated so skilfully into the story that it hardly has the feel of a history book.

Kindle Customer
5.0 out of 5 stars Walk through the mist to the early 17th century.
Reviewed in Australia on 22 December 2017
Verified Purchase
A fascinating and well researched tale of a woman caught between colonial Virginia, native tribal living and the present day.
Read more
Helpful
Comment Report abuse

NYM
5.0 out of 5 stars Walks Through Mist
Reviewed in Australia on 11 April 2015
This wasn't a book that I would have normally picked up, but I kept seeing great reviews for it, so I had to take the plunge. I'm so glad I did. A blend of history, paranormal, and romance, Walks Through Mist will appeal to many readers, regardless of their primary genre. The characters were very well written, the plot was engaging, the prose superb. It may not be suited to those who read exclusively Jason Bourne-type novels, but if you enjoy a diverse library, I highly recommend you pick up this book. Thanks to Ms. Murphy for this fantastic story.
Read more
One person found this helpful
Helpful
Comment Report abuse

Pamela Foley
4.0 out of 5 stars WALKS THROUGH MIST
Reviewed in Australia on 8 March 2015
I’ve always been a strong believer In the Native American culture and how they interacted with nature and each other. As Phoebe jumped back and forth from the 1600’s to present time, it saddened me to recognize the changes and destruction we greedy white people have done with our planet.

This wasn’t a fast paced story as it took it’s time building the characters and surroundings. There’s a lot of history and storyline to go through as Phoebe is regressed back in her memories, trying to remember who she really is. But as I neared the halfway mark in the book, I found myself reading faster and faster, getting more drawn into the story. I wanted to see if Phoebe and Lee actually connected and who Lee really was. I thought I had it figured out, but I was afraid that Phoebe was going to vanish just like she appeared, into the mist.

I loved the way Phoebe talked and Murphy kept her true to her time period whenever the POV switched back to her, which couldn’t have been easy. I also want to point out, I was never once confused who was talking or the POV. The characters were well developed, even down to the girls living in the half-way house with Phoebe.

The story takes us back through all the peril’s the colonists and Indians had to face back in the 1600’s. Kim Murphy did a lot of research and it’s reflected in the story. As a dabbler in herbology, I can attest to her proper use of the herbs that were used back then and even today. Herbs are so much stronger and better than the white man’s medicine.

I really liked this story, but there was one point that stuck out at me. If Phoebe really was from the 1600’s, she wouldn’t be able to drink our contaminated water, let alone all the chemically processed foods we ingest on a daily basis. Her body would have rebelled and she should have gotten sick. I just don’t think she would have readily taken to eating processed foods and munching on French fries.

If you’re looking for a good, paranormal romance, I highly recommend this book. I give it 4 feathers.
Read more
One person found this helpful
Helpful
Comment Report abuse
See all reviews

Mrs. Bruce
5.0 out of 5 stars A rare 5 stars from me - a different type of historical novel
Reviewed in the United Kingdom on 26 November 2017
Verified Purchase
Because I read so many books, I rarely give 5 stars, but this one deserved it.
The story of Phoebe living with Red Indians in the 17th century could have been just another
historical novel. However, this book was much more interesting in that Phoebe has time traveled
into the modern world.

We find out about her background through her hypnosis sessions with Shae, a psychologist. Each
session builds a bit more of her history, though Shae believes Phoebe is just deluding herself, even though
she never steps "out of character". I did find the time spent in Shae's office and her doubts about her patient
to be a bit slow and repetitive. But the story really picked up when we went back into the past.

Phoebe is connected to Shae's ex-husband, Lee, who was the cop who first dealt with her. She slowly
manages to convince him that she really is from the 17th century.

I was intrigued to see how her presence in this century would be resolved. It also made me feel ashamed at how
the white man treated the natives and stole their land when they brought so-called civilization to "the savages"!
I enjoyed the way Phoebe used plants as medicine.
I recommend this book to anyone who has the imagination to accept the idea of time travelling.
If you cannot do that, I suggest you give the book a miss!
Read more
One person found this helpful
Report abuse

Closet Romantic
5.0 out of 5 stars Not your usual time travel story
Reviewed in the United Kingdom on 2 December 2018
Verified Purchase
This story was so much more than I was expecting. Lots of historic details about early 17th century Virginia during Phoebe's early life and some very good writing about the present day and the investigations into her 'lost memory'. It is a very well written historic novel, very different to the usual time travel novels I read; and I shall certainly be looking at the other books in the series.
Read more
Report abuse

Kim
5.0 out of 5 stars fascinating reading
Reviewed in the United Kingdom on 9 December 2017
Verified Purchase
what a brilliant story. the amount of research and how it all fits together was amazing. So sad to read in these details about the terrors they had to endure . the author fully brings all the people and their differences to life.you really get to know the characters well and want so much for them to be accepted and happy. it isnt the type of book i would usually read but so glad i did and had trouble putting it down. really pleased to see there are more to follow on feel this is much more than 5 stars.
Read more
Report abuse

Mrs. Julia Anne Garner
5.0 out of 5 stars Walks Through Mist
Reviewed in the United Kingdom on 31 July 2017
Verified Purchase
Absolutely amazing! I love the way that Phoebe and Lee travel through time, and the danger that awaits them in each era. The story line was so compelling that I was unable to put the book down for long. The author, Kim Murphy, is extremely talented and I have all her books, every one of which I have thoroughly enjoyed reading. I'll be watching out for the next one!
Read more
Report abuse

Gabrielle
5.0 out of 5 stars One of the best
Reviewed in the United Kingdom on 27 December 2017
Verified Purchase
Of all the North American Indian books I have read, this ranks very highly. It's finely woven and so credible you utterly believe what you are reading. Fascinating and captivating.
Read more
Report abuse
See all reviews
Get FREE delivery with Amazon Prime
Prime members enjoy FREE Delivery and exclusive access to movies, TV shows, music, Kindle e-books, Twitch Prime, and more.
> Get Started
Back to top
Get to Know Us
Make Money with Us
Let Us Help You
And don't forget:
© 1996-2020, Amazon.com, Inc. or its affiliates