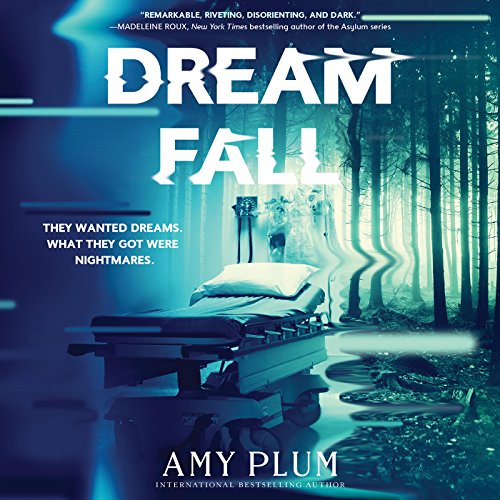 The Bibliophile Girl
5.0 out of 5 stars quick, intense and scary
Reviewed in the United Kingdom on 1 March 2018
Verified Purchase
The last time that I had heard (or read) anything from Amy Plum, it was the Die For Me trilogy. I think I read the books when I was about 14 (?) and I remember really enjoying them. That's most of the reason to why I picked up Dreamfall, because of who the author was. The rest of the reason was because the premise sounded absolutely AMAZING!

Cata Cordova suffers from such debilitating insomnia that she agreed to take part in an experimental new procedure. She thought things couldn’t get any worse...but she was terribly wrong.

Soon after the experiment begins, there’s a malfunction with the lab equipment, and Cata and six other teen patients are plunged into a shared dreamworld with no memory of how they got there. Even worse, they come to the chilling realization that they are trapped in a place where their worst nightmares have come to life. Hunted by creatures from their darkest imaginations and tormented by secrets they’d rather keep buried, Cata and the others will be forced to band together to face their biggest fears. And if they can’t find a way to defeat their dreams, they will never wake up.

Dreamfall is actually a very short book, it has 200-and-something pages and IT IS SUCH A QUICK READ! I read it in about 2 hours and it was fast-paced, creepy and a crazy rollercoaster. The thing about the premise that intrigued me the most was the concept of sleep paralysis. I have endured it once, and it was the scariest thing that I have ever encountered and I'm lucky to have only been through it the one time. The patients in this book suffer with extreme insomnia due to OCD, PTSD, depression, anxiety, eating disorders... There is so much representation in this book for mental health and I was so happy to see mental health issues explored. I can only talk about the rep for OCD, depression and anxiety as those are things that I personally suffer with, and I can say that the representation was not at all harmful.

There are three perspectives throughout the book: Cata, Felix and Jamie. Cata and Felix are our eyes and ears whilst they are in the dream world and Jamie tells us what is happening whilst the patients are in the bed and in the comatose state. What is interesting about the character of Jamie is that you don't know what gender they are. It's not at all important, but I'm pointing it out because I've never known a novel to do that before, and leave the gender to the reader's imagination. Speaking of Jamie, I feel like their last line of the book was somewhat stupid and non-specific. They could have been so so much more specific about what they said to Felix. I know that it's just a cliffhanger so that we find out in the second book, Neverwake, but in order to help Felix, Jamie should have just told him exactly what was happening.

"When working with an unknown situation, you have to identify known factors and work within their boundaries."

The thing that set this book apart was it creepy factor. Whilst all of the subjects are in their joint dream, they encounter some of the weirdest and scariest things. Each dream that they go through is one of the subjects nightmares. And the patients have to survive in the nightmare. If they die in the nightmare, there is a very good chance that they will die in 'real life' as well... Plus... there's creepy clowns. VERY CREEPY CLOWNS. If this book was ever made into a movie, then I wouldn't go and see it, just because of the clowns. It really scared me when I was reading about that specific nightmare and I genuinely had a lot of trouble going to sleep that night. It takes a lot for me to be scared by a book. It's very easy for me to be scared by a TV show or a film (I'm an absolute wuss when it comes to those), but when it comes to books, it takes a lot to terrify me... And this book did exactly that. (Side note: I do think that this book would make an excellent movie though!)

If you're looking for a quick, intense and scary read with a concept that isn't really explored in YA thrillers, then this is the book that you're looking for. I loved all of the characters (and loved to hate a couple), there were good friendships, banter, strong female characters and an absolutely plot-driven book. I'm very much looking forward to Neverwake to find out more about the characters and to see what happens to them. The second book CANNOT COME SOON ENOUGH! I needed it about 2 weeks ago and unfortunately, I have to wait til August. But I DO HAVE IT ON PRE-ORDER! SO IT'S ALL GOOD!
Read more
Report abuse

Louise
5.0 out of 5 stars Gripping
Reviewed in the United Kingdom on 26 September 2017
Verified Purchase
5 stars for another gripping read by Amy Plum. I am very much looking forward to reading the next book.
Read more
Report abuse

Vespa
3.0 out of 5 stars especially since I absolutely LOVE all her other books
Reviewed in Canada on 28 June 2017
Verified Purchase
Honestly, I was a bit surprised. I was expecting a little more, especially since I absolutely LOVE all her other books. I couldn't really connect with the characters, and there was a bit of jumping back and forth. I got a little bored with the characters different points of view and experiences of the same scene.....
I admit that it is super creepy and nightmarish and it should apeal to kids around 16+ but I'll have to rate it a 3/5. Sorry :(
Read more
Report abuse

Fallon Arsenault
5.0 out of 5 stars Thrilling, fast paced
Reviewed in Canada on 9 April 2020
Verified Purchase
I had the second book on my shelves for years before finally buying this book. I finished both within two days!
Read more
Report abuse
See all reviews
Back to top
Get to Know Us
Make Money with Us
Let Us Help You
And don't forget:
© 1996-2021, Amazon.com, Inc. or its affiliates