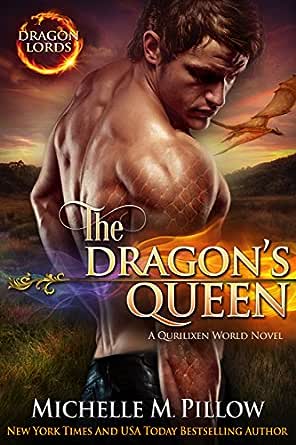 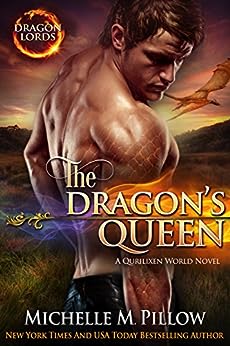 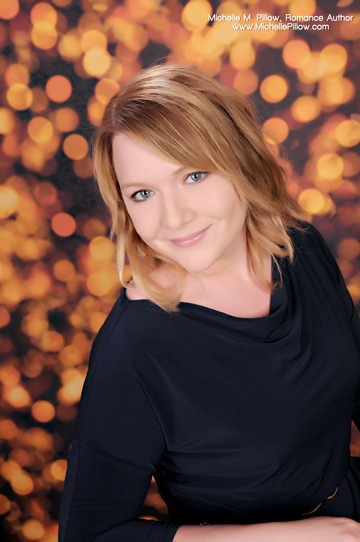 "The Dragon's Queen is one Kick-Butt romantic story of the woman everyone considers a rare and precious gem and the one man who sees beyond the 'fairy tale' to the hardcore goddess she really is... I enjoyed this book from start to finish, watching both Llyr and Mede change and move towards each other as who they are meant to be." - Kris on Insightful Mind Reviews

5 Stars! "I personally saved this book for last as part of the dragon lords series and I was not disappointed. What a perfect ending!" - TSA

New York Times & USA Today Bestselling Author Michelle M. Pillow, Author of All Things Romance www.MichellePillow.com As long as she can remember, Michelle has had a strange fascination with anything supernatural and sci-fi. After discovering historical romance novels, it was only natural that the supernatural and love/romance elements should someday meet in her wonderland of a brain. She's glad they did for their children have been pouring onto the computer screen ever since. Michelle loves to travel and try new things, whether it's a paranormal investigation of an old Vaudeville Theatre or climbing Mayan temples in Belize. She's addicted to movies and used to drive her mother crazy while quoting random scenes with her brother. Though it has yet to happen, her dream is to be in a horror movie as 1. A zombie or 2. The expendable screaming chick who gets it in the beginning credits. But for the most part she can be found writing in her office with a cup of coffee in pajama pants. Come say hello! She loves talking with readers on social media! Join the Newsletter http://michellepillow.com/newslettersignup/

Tessa
TOP 50 REVIEWER
4.0 out of 5 stars Prequel to the Dragon shifter books -a must read for fans.
Reviewed in Australia on 19 December 2015
Format: Kindle EditionVerified Purchase
This is a prequel to the Dragon Lords series. It tells the story of how Lady (Queen to be) Mede is wooed by Lord (later King) Llyr of the Draig. It also tells of a meeting between Mede and the Prince of the Var, the Cat shifting people who share the planet with the Draig. It provides answers to a lot of the questions that arise in the main series.
One of the things that I like about this series is that it is more toned down in the sex scenes (they're still a bit much for my tastes) than in some of the author's other books. These books are for mature readers only.

Evampire
TOP 500 REVIEWER
5.0 out of 5 stars The Dragon's Queen
Reviewed in Australia on 14 March 2015
Format: Kindle Edition
Mede is special, she’s the only female dragon shifter and she’s determined not to be mated… even to a prince in this bewitching paranormal romance. I have to say that I am really glad that I get to read King Llyr and Queen Mede’s story as well as getting a fascinating look at what started King Attor’s obsession with ending the Draig’s bloodline as it gives the reader a better perspective of the life on Qurilixian. I have to say that I quit enjoyed this romance and Mede’s intriguing character and I can certainly understand why she makes such a great dragon queen.

CRAZY4PEANUTBUTTER
4.0 out of 5 stars GOOD BOOK
Reviewed in Australia on 29 July 2015
Format: Kindle Edition
In this prequel we get to find out how king Llyr and queen Mede met and fell in love. As well as the reason behind the war between the Draig and the Var. Mede is feisty, brave, strong, stubborn and the only living female dragon. I think she might be my favorite female so far. I really liked Mede and Llyr together. I enjoyed this book. I loved the humor and the romance. The book is very well written and a must read for all paranormal readers.

I highly recommend this series. It's a really good read.

Sam Ramsey
5.0 out of 5 stars Funny, Exciting, Great Writing!!
Reviewed in the United Kingdom on 3 October 2014
Format: Kindle EditionVerified Purchase
SO GOOD!!!! I was seriously dubous of this book I pre-ordered it anyway. I loved the original series with a passion and fell in love with the princes, however felt that a prequel was a step too far and was not looking forward to it. When the book arrived on my kindle, i am ashamed to say that it sat there for a few days as i put it off as i was not really looking foward to reading it as coudn't really see that it was going to be that great.

HOWEVER, as with all Michelles books it was brilliant, the writing was good, the humour was excellent and the female lead was strong and lead the male a merry dance, what more can we want, lol!!

An excellent additon to the series, and will definitely recommend to family, friends and anyone ready this review. Would also recommend the entire series, a seriously good read.
Read more
2 people found this helpful
Helpful
Sending feedback...
Thank you for your feedback.
Sorry, we failed to record your vote. Please try again
Report abuse

rachel mcdonald
5.0 out of 5 stars Michelle strikes gold again!! A must read!!
Reviewed in the United Kingdom on 10 September 2015
Format: Kindle EditionVerified Purchase
Ever wondered why King Attor of the Var hates the Draig? Ever wonder who came up with the idea of the grooms wearing just a loin cloth? '

Well look no further!! This wonderfully written story draws you in from the beginning and doesn't let you go. As much as it is a prequel to the first 8 Dragon Lord books, I liked the fact that this is book 9. It answers questions you didn't realise you wanted answering and I certainly had some 'Oh so THAT'S how it happened' moments.

If you have read the first 8 then you need to read this.
If you haven't read ANY of the Dragon Lord books.....where have you been hiding?! Go out and buy them now!!!! You will not be disappointed!!!
Read more
Helpful
Sending feedback...
Thank you for your feedback.
Sorry, we failed to record your vote. Please try again
Report abuse

HonourYourReaders
5.0 out of 5 stars Feisty dragon girl who grows up to be amazing Dragon Queen in love with adorable Dragon King
Reviewed in the United Kingdom on 12 July 2015
Verified Purchase
Love the entire series - read everything Ms Pillow produces - and this one is a definite favourite - great to see a female warrior and she turns into a really great mother in law which is very unusual

Read the entire series - worth the effort and can do wonders for ones temperament if stuck on a wet UK beach holiday
Read more
Helpful
Sending feedback...
Thank you for your feedback.
Sorry, we failed to record your vote. Please try again
Report abuse

M. Wass
5.0 out of 5 stars Five Stars
Reviewed in the United Kingdom on 24 November 2014
Format: Kindle EditionVerified Purchase
Love this series and looking forward to any future ones that come out.
Read more
One person found this helpful
Helpful
Sending feedback...
Thank you for your feedback.
Sorry, we failed to record your vote. Please try again
Report abuse

Amazon Customer
5.0 out of 5 stars Excellent book
Reviewed in the United Kingdom on 31 March 2015
Format: Kindle EditionVerified Purchase
Really like this Author, and this lived up to expectations. Will certainly be purchasing more.
Read more
Helpful
Sending feedback...
Thank you for your feedback.
Sorry, we failed to record your vote. Please try again
Report abuse
Load more international reviews

Gina
5.0 out of 5 stars the dragons queen
Reviewed in the United Kingdom on 20 January 2015
Format: Kindle EditionVerified Purchase
another great dragon lord book helps you to understand how the queen be came the queen a must reead for any fan
Read more
Helpful
Sending feedback...
Thank you for your feedback.
Sorry, we failed to record your vote. Please try again
Report abuse

Carly Rolfe
4.0 out of 5 stars One of my favourites
Reviewed in the United Kingdom on 8 January 2015
Format: Kindle EditionVerified Purchase
I always enjoy reading a book where women can kick butt as much as the men if not better fab read
Read more
Helpful
Sending feedback...
Thank you for your feedback.
Sorry, we failed to record your vote. Please try again
Report abuse